New York State Route 303 (NY 303) is a north–south state highway in eastern Rockland County, New York, in the United States. It begins at the New Jersey state line in the hamlet of Tappan and ends 10.92 miles (17.57 km) later at an intersection with U.S. Route 9W (US 9W) in Clarkstown. NY 303 intersects the Palisades Interstate Parkway and the New York State Thruway, the latter carrying Interstate 87 (I-87) and I-287. 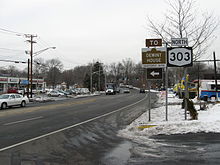 NY 303 begins at the New Jersey –New York border in Tappan, a hamlet in the town of Orangetown. Directly south of the border is Bergen County, New Jersey, in which NY 303 continues as County Route 505 (CR 505). NY 303 begins as a four-lane route with mostly full access, and it retains this status until Valley Cottage. As it progresses northward, it intersects the Palisades Interstate Parkway (PIP) at exit 5 in Tappan. The interchange is the southernmost New York exit along the PIP. Right after the PIP junction, NY 303 enters Orangeburg, where it intersects the signed northern terminus of NY 340. NY 303 also intersects CR 20 at this location. At these intersections, NY 303 connects to St. Thomas Aquinas College and Dominican College by way of NY 340 and CR 20, respectively.[3]

The route continues northward into Blauvelt, where it runs along the western border of Clausland Mountain County Park, Blauvelt State Park, and other town parks. While in Blauvelt, NY 303 briefly overlaps with CR 11, a mostly parallel county route that veers west to avoid the state park. Past CR 11, NY 303 proceeds north into the town of Clarkstown and the hamlet of Central Nyack, home to NY 303's interchange with NY 59. After the interchange, NY 303 passes Palisades Center and intersects the New York State Thruway (I-87 and I-287) at exit 12.[3]

Just after Palisades Center, NY 303 briefly turns from a four-lane road to a four-lane divided highway in Valley Cottage. This is short-lived, however, as NY 303 reverts to a two-lane undivided route at an intersection with Storms Road. Farther north, NY 303 enters the vicinity of Congers, passing east of Congers Lake prior to intersecting CR 80. Past this point, NY 303 proceeds toward its northern terminus at US 9W. NY 303 ends in northern Clarkstown, less than 1 mile (1.6 km) from the Haverstraw town line and NY 304's northern terminus. The intersection between NY 303 and US 9W is roughly 0.7 miles (1.1 km) south of where US 9W connects to NY 304.[3] 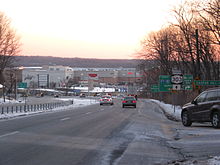 NY 303 was assigned as part of the 1930 renumbering of state highways in New York. The route initially followed its current alignment from the New Jersey state line north to Orangeburg, where it continued northward on Greenbush Road to its end in Central Nyack. North of this point, NY 303 followed Kings Highway and Old Haverstraw Road to US 9W near Congers.[1] It was moved onto its current alignment south of Central Nyack by 1932[4] and shifted onto its modern routing north of Central Nyack ca. 1936.[5][6]

The northern terminus at US 9W was previously a "Y" interchange with only a northbound ramp to Route 9W and a southbound ramp from 9W.[9] This interchange was torn down in the late 1980s.[citation needed]