/ˈnaɪ.æk/) is a village in the towns of Orangetown and Clarkstown in Rockland County, New York, United States, located north of South Nyack; east of Central Nyack; south of Upper Nyack and west of the Hudson River, approximately 19 miles north of the Manhattan boundary, it is an inner suburb of New York City, directly across from Tarrytown. Tarrytown and Nyack are on either bank of the largest expanse of the Tappan Zee, in the lower Hudson Valley. Nyack had a population of 6,737 as of the 2000 census.

Nyack is one of five villages and hamlets (Nyack, Central Nyack, South Nyack, Upper Nyack and West Nyack) that make up an area of southeastern Rockland County called The Nyacks. Named after the Native Americans who resided there before colonization, the village itself lies on the hilly terrain that meets the western shore of the Hudson River.

The village takes up approximately 1.6 square miles (4.1 square kilometers), with over 50% of the area consisting of the water of the Hudson River. Nyack consists mostly of low-rise buildings that lie along the river's western shore. It is in the Nyack School District.

Stone Native American relics and heaps of oyster shells found along the shore of the Hudson indicate that this was a favorite fishing spot of the natives. In 1675, the first Europeans settled in Rockland County at Nyack. Three major industries once thrived here: sandstone quarrying for New York City building (ca. 1800–40); boat building—sloops, steamboats, then pleasure craft and World War I and II submarine chasers (ca. 1815–1948); and shoe manufacturing (ca. 1828–1900).

Following the extension of the Northern Railroad of New Jersey into the community in the mid-19th century, rapid growth ensued. Because town government was no longer seen as an effective way to deal with the community's needs, village incorporation was discussed. Fearing higher taxes, those in what would have become the northern part of Nyack village formed their own municipal corporation first, named Upper Nyack. Nyack village was incorporated, although without this northern portion. Residents in the southern part of Nyack village, however, soon became dissatisfied with the notion of paying taxes that more heavily benefited the rest of the village. After succeeding in dissolving Nyack's corporation, the southern portion of the former village incorporated as the village of South Nyack. The area between Upper Nyack and South Nyack was reincorporated thereafter, again as Nyack.[1]

Throughout the 18th century and 19th centuries, Nyack was known for its shipbuilding and was the commercial center of Rockland County. In the 19th century, a number of factories manufactured shoes. The West Shore Railroad connected the village with Weehawken, New Jersey, where ferries took passengers to New York City, until it was discontinued in the second half of the 20th century. With the completion of the Tappan Zee Bridge in December 1955, connecting Nyack with Tarrytown in Westchester County, the population increased and Nyack's commercial sector expanded.

In the 1980s, the village underwent a major urban revitalization project to commercialize the downtown area and to expand its economy. The Helen Hayes Theatre was built and the downtown area became home to many new business establishments.

In 1991 the landmark court case Stambovsky v. Ackley ruled that a house at 1 LaVeta Place on the Hudson River was legally haunted and that the owner (but not the real estate agent) was required to disclose that to prospective buyers. The owner, Helen Ackley, earlier had organized haunted house tours and was party to an article about it in Readers Digest. After Ackley sold the house to another buyer there were no recent reports of hauntings.[2][3]

On August 10 Highland Hose Company No. 5, a two-story brick firehouse located at 288 Main St celebrated 100 years at the firehouse. The firehouse was built in 1910 – fifteen years after Highland Hose was founded. The company's 1949 Ahrens-Fox fire engine was polished to bright, gleaming red and is still in use after more than 50 years.[4]

Nyack is on the west bank of the Hudson River, north of the Tappan Zee Bridge.

There were 3,188 households out of which 20.5% had children under the age of 18 living with them, 32.0% were married couples living together, 12.3% had a female householder with no husband present, and 52.6% were non-families. 42.3% of all households were made up of individuals and 12.3% had someone living alone who was 65 years of age or older. The average household size was 2.10 and the average family size was 2.93. 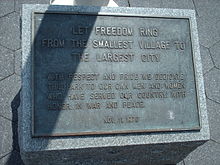 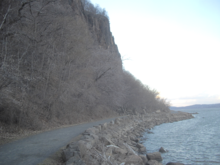