For an individual weak acid or weak base component, see Buffering agent. For uses not related to acid-base chemistry, see Buffer (disambiguation). 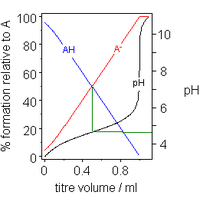 Simulated titration of an acidified solution of a weak acid (pKa = 4.7) with alkali.

Buffer solutions achieve their resistance to pH change because of the presence of an equilibrium between the acid HA and its conjugate base A-.

The effect is illustrated by the simulated titration of a weak acid with pKa = 4.7. The relative concentration of undissociated acid is shown in blue and of its conjugate base in red. The pH changes relatively slowly in the buffer region, pH = pKa ± 1, centered at pH = 4.7 where [HA] = [A-], but once the acid is more than 95% deprotonated the pH rises much more rapidly. 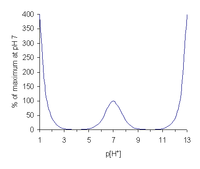 Buffer capacity for a 0.1 M solution of an acid with pKa of 7

Buffer capacity, β, is a quantitative measure of the resistance of a buffer solution to pH change on addition of hydroxide ions. It can be defined as follows.

where dn is an infinitesimal amount of added base and d(p[H+]) is the resulting infinitesimal change in the cologarithm of the hydrogen ion concentration. With this definition the buffer capacity of a weak acid, with a dissociation constant Ka, can be expressed as

where CA is the analytical concentration of the acid.[1] pH is approximately equal to -log10[H+].

There are three regions of high buffer capacity.

First write down the equilibrium expression.

The initial, change and equilibrium concentrations of these three components can be organized in an ICE table.

To find x, use the formula for the equilibrium constant:

Substitute the concentrations with the values found in the last row of the ICE table:

With specific values for C0 and Ka this equation can be solved for x. Assuming that pH = -log10[H+] the pH can be calculated as pH = -log10x.

Note. When a pH meter is calibrated using known buffers, the reading gives the hydrogen ion activity rather than its concentration. In this case the meter reading may differ from the value calculated as above. For example, calculation of pH of phosphate-buffered saline would give the value of 7.96, whereas the meter reading would be 7.4. The discrepancy arises when the acid dissociation constant value is specified as a concentration quotient and would not occur if Ka were specified as a quotient of activities. 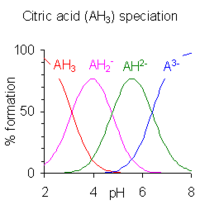 % species formation calculated for a 10 millimolar solution of citric acid.

When the difference between successive pK values is less than about three there is overlap between the pH range of existence of the species in equilibrium. The smaller the difference, the more the overlap. In the case of citric acid, the overlap is extensive and solutions of citric acid are buffered over the whole range of pH 2.5 to 7.5. Calculation of the pH of a particular mixture requires a speciation calculation to be performed.

Buffer solutions are necessary to keep the correct pH for enzymes in many organisms to work. Many enzymes work only under very precise conditions; if the pH moves outside of a narrow range, the enzymes slow or stop working and can denature. In many cases denaturation can permanently disable their catalytic activity.[2] A buffer of carbonic acid (H2CO3) and bicarbonate (HCO3−) is present in blood plasma, to maintain a pH between 7.35 and 7.45.

Industrially, buffer solutions are used in fermentation processes and in setting the correct conditions for dyes used in colouring fabrics. They are also used in chemical analysis[1] and calibration of pH meters.

The majority of biological samples that are used in research are made in buffers, especially phosphate buffered saline (PBS) at pH 7.4.

By combining substances with pKa values differing by only two or less and adjusting the pH a wide-range of buffers can be obtained. Citric acid is a useful component of a buffer mixture because it has three pKa values, separated by less than two. The buffer range can be extended by adding other buffering agents. The following two-component mixtures (McIlvaine's buffer solutions have a buffer range of pH 3 to 8.[3]

A mixture containing citric acid, potassium dihydrogen phosphate, boric acid, and diethyl barbituric acid can be made to cover the pH range 2.6 to 12.[4]

Other universal buffers are Carmody buffer and Britton-Robinson buffer, developed in 1931.