Nick Cave and the Bad Seeds

Nick Cave and the Bad Seeds

Nick Cave and the Bad Seeds are an Australian alternative rock band, formed in Melbourne in 1983. The band is fronted by Nick Cave and has featured international personnel throughout their career.

Nick Cave and the Bad Seeds was originally formed in late 1983 by two former members of the Australian band The Birthday Party: Nick Cave (vocals, songwriter, keyboards, harmonica) and Mick Harvey (drums, guitar, bass, keyboards, occasional songwriter). The name of the new project indicated the shift in Cave's role from lead singer — as in The Birthday Party — to band leader, and coincided with his shift in songwriting style from expressionism to detailed lyrical narrative.

Cave and Harvey were joined by a semi-fluid group of bandmates, initially including Einstürzende Neubauten member Blixa Bargeld (guitar), Hugo Race (guitar), and former Magazine member Barry Adamson (guitar, bass, piano). After some studio work, the band's debut public performance was held on New Year's Eve 1983 in Melbourne, under the name Nick Cave – Man Or Myth? and was followed by a short tour, even though the band was "in the wilderness" and without management.[1] The band then briefly performed under the name Nick Cave and the Cavemen before adopting the "Bad Seeds" moniker, in reference to the final Birthday Party release, The Bad Seed EP. Soon after their final name change, the group recorded their debut album, From Her to Eternity, which released in 1984, and was quickly followed by Race's departure from the group.

Cave separated from long-time girlfriend and credited Bad Seed lyricist Anita Lane prior to the final sessions from From Her to Eternity and began a relationship with Elisabeth Recker. After relocating himself and The Bad Seeds to West Berlin, Nick Cave recorded and released a further four albums with The Bad Seeds. The Firstborn Is Dead, released in 1985, featured their hit single "Tupelo and their 1986 cover album Kicking Against the Pricks featured covers from Cave's influences, such as Johnny Cash, John Lee Hooker and Lead Belly. The band gathered a notable following soon after the release of Your Funeral, My Trial in 1986 and received praise for their 1988 Tender Prey which features Cave's signature song, "The Mercy Seat". Kicking Against the Pricks was the first album to feature the drumming of Swiss Thomas Wydler, which was shortly followed by Adamson's departure and the arrival of American guitarist Kid Congo Powers, along with short-tenured keyboardist Roland Wolf. In 1987, the Bad Seeds made an appearance in the Wim Wenders film Wings of Desire and Cave was also featured in the 1988 film Ghosts... of the Civil Dead which he co-wrote.

The band collectively eliminated hard drugs from its diet[citation needed] in 1989, a habit which had caused tension within the group and had led to the dissolution of The Birthday Party seven years prior. Cave relocated to Sao Paulo, Brazil with partner Viviane Carneiro soon after the release and subsequent tour for Tender Prey and released The Good Son, Powers' final collaboration with the band, in 1990. The album was well-received critically and commercially as it featured a more structured sound as opposed to the band's previous experimental sound. Their next record, 1992's Henry's Dream saw the band's line-up change yet again and was the first album to feature current members Martyn Casey and Conway Savage. The album's tour — which is documented on 1993's live album Live Seeds — was the band's most successful up to that time. In mid-1993, Cave relocated to London where Henry's Dream's follow-up Let Love In was recorded in 1994.

In 1996, Nick Cave and the Bad Seeds released Murder Ballads, the band's most notable work to date. Dealing with the subject of murder, the album includes a cover of the folk song "Henry Lee" — a duet with British rock singer PJ Harvey, with whom Cave had a brief relationship — and "Where the Wild Roses Grow", a duet with Australian pop idol Kylie Minogue. The latter was a mainstream hit in the United Kingdom and in Australia, winning three ARIA Awards including "Song of the Year." Australian violinist Warren Ellis began working with the band at this time, and would play an increasingly significant creative role in the band's output in coming years. American drummer Jim Sclavunos also joined the group.

1997 saw the release of the band's next album, The Boatman's Call, which was marked by a radical shift away from archetypal and violent narratives to biographical and confessional songs about his relationships with ex-wife Vivian Carneiro and PJ Harvey. After the release of the album, Cave then took a short break to rehabilitate from his 20 years of heroin and alcohol abuse, during which time he also remarried. 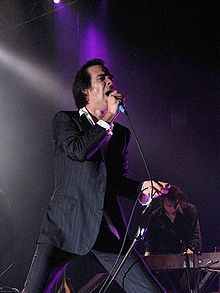 Cave and Conway Savage performing in 2004

Following Cave's rehabilitation throughout the latter half of the 1990s, the band resurfaced with No More Shall We Part in 2001. After the release of 2003's Nocturama, long-time member Blixa Bargeld announced he was leaving the band after twenty years with the group to devote more time to Einstürzende Neubauten.

In 2004, the band released the acclaimed two-disc set Abattoir Blues/The Lyre of Orpheus, with English guitarist and organist James Johnston (of the group Gallon Drunk) replacing Bargeld. To compliment the success of the double album, Nick Cave and the Bad Seeds released B-Sides & Rarities, a three-disc, 56-track collection of B-sides, rarities, and tracks that had appeared on film soundtracks in 2005.

Cave, Ellis, Sclavunos and Casey formed the new side-project Grinderman in 2006. The band, essentially half of The Bad Seeds and featuring Cave on guitar for the first significant time, perform more garage rock-influenced music that nonetheless retains much of The Bad Seeds' aura. Since this time, the two bands have operated simultaneously and Grinderman have since released two albums, 2007's Grinderman and 2010's follow-up Grinderman 2.

In October 2007, Cave was inducted into the ARIA Hall of Fame, and expressed his intention to induct the Australian members of The Bad Seeds (excluding Hugo Race), plus the members of The Birthday Party (excluding Phill Calvert) in his acceptance speech.

The band released their fourteenth and most recent studio album, Dig, Lazarus, Dig!!! in 2008. Inspired by the Biblical story of the resurrection of Lazarus of Bethany by Jesus Christ,[2][3] the album received excellent reviews. The band also released an exclusive "Live Session" EP[4] through iTunes in April 2008, recorded at Air Studios on 2 March, as part of iTunes' "Live From London" series. The group next embarked on a North American and European tour supporting Dig, Lazarus, Dig!!!, with a seven-piece lineup omitting Johnston, who had reportedly left the group after the album's completion.[5]

Cave and the band curated an edition of the All Tomorrow's Parties music festival, the first in Australia, which took place in a number of locations in January 2009. On 22 January 2009, following a string of Bad Seeds concerts in Australia, Mute Records issued a statement from Mick Harvey announcing his departure from the band after 25 years citing professional and personal reasons.[6][7] It was the end of a 36 year-long musical collaboration between Cave and Harvey and left Cave as the group's only original member. Shortly thereafter, the band announced plans to perform summer festival dates with the addition of guitarist Ed Kuepper, formerly of the influential Australian bands The Saints and Laughing Clowns.

The band's song "O Children" from the album Abattoir Blues/The Lyre of Orpheus appeared in the 2010 film Harry Potter and the Deathly Hallows – Part 1.

In addition to his performances with the Bad Seeds, Cave has, since the '90s, performed live 'solo' tours with Cave on piano, Ellis on violin and a fluctuating bass/drums line-up. The current trio is Bad Seeds' Martyn P. Casey, Jim Sclavunos and Warren Ellis (nicknamed the Mini-Seeds, later known as a separate band, Grinderman).

Band leader Cave moved from Melbourne to London in 1980. Since forming The Bad Seeds in 1984 he has lived in Berlin, São Paulo, London and Brighton (UK). The various international members of the band meet to record and tour. Nationalities of the current and ex-members are: