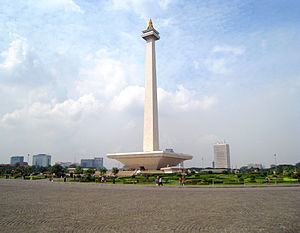 The National Monument stands in the middle of Medan Merdeka or Independence Square, Jakarta.

Merdeka is a word in the Indonesian and Malay language meaning Independent or freedom. It is derived from the Sanskrit Maharddhika meaning "rich, prosperous and powerful". In the Malay archipelago, this term had acquired the meaning of a freed slave. The term Mardijker is a Dutch corruption of the Portuguese version of the original Sanskrit words and was used to designate former Portuguese and Dutch slaves from India in the East Indies, known as Mardijkers, whence the Malay meaning of "free(dom)" is derived. Mardijker are the former catholic slaves bought from India and the East Indies that were liberated by the Dutch if they abandoned Catholicism and embraced the reformed Dutch church.[1] The term was significant during the anticolonialist and pro-independence movements of the colonies of Indonesia, Malaya, and Singapore, in the history of Indonesia, history of Malaysia, and in the history of Singapore. It became a battle-cry for those demanding independence from the colonial administrations of the Netherlands and United Kingdom. The Philippine term Maharlika, meaning "rich, prosperous, elevated", has the same Sanskrit origins as the Malay Merdeka. In the southern Philippine island of Mindanao, the Moro people belonging to major ethno-linguistic groups of Meranaw, Maguindanaw and Iranun, use maradeka in the same meaning as freedom or liberation and freedom group there is called Maradeka.

The term merdeka was used in Indonesia in a similar way to designate freedom from the Dutch colonial government during the struggle for independence in the 1940s.[2] Republic of Indonesia declared its Hari Kemerdekaan Indonesia or Proclamation of Indonesian Independence on 17 August 1945, and it has become national holiday and commemorated annually ever since.

During the struggle of independence in 1945 to 1949, it was used as a national salute of victory and honor, by raising open palms as high as the head and shouting out loud "Merdeka!" From here many slogans came, such as "Sekali Merdeka tetap Merdeka!" (Freedom once and for all) or "Merdeka atau Mati" (Freedom or death). This was intended to raise the morale of all the people of Indonesia to continue to fight against the Dutch and the Allied forces trying to re-establish control over Indonesia; it was so important that even it became a Government Edict on 31st August 1945.

On 1st September it was mentioned by the president Soekarno in his short speech:

"Since today we will cry out loud, "Merdeka!" Continue on that loud battle cry, as the soul calls out loud for freedom! A soul of freedom, one of fighting and working spirit! TO FIGHT AND TO WORK! Prove it!"

The name "Merdeka" is used as the name of Indonesian stately places, such as Merdeka Palace and Merdeka Square in central Jakarta, also Merdeka Building in Bandung.

Nowadays the Acehnese and West Papuan autonomy movements currently use the term to express the concept of freedom, and the meaning of the term ranges from greater freedom to outright political independence. The major autonomy movement in Aceh, the Free Aceh Movement has the term in its name (Gerakan Aceh Merdeka), as does the major armed independence group in West Papua, the Free Papua Movement (Organisasi Papua Merdeka). Nowadays too, some conservative and Nationalists had re-thought the 'Merdeka' stance of Indonesia, many question related to it such as "Apakah kita benar-benar sudah merdeka?" (Had we been really independent?). They used the term Merdeka as a motivational battle cry to the public for a change against the increasing free-fight liberalism, globalization, and neo-imperialism in terms of capitalism in Indonesia, though the word "Semangat Reformasi" (Spirit of the Reformation) had since now more been used. 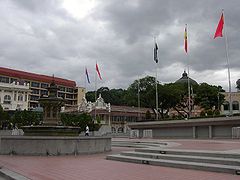 Today in Malaysia, in which Malaya, Sabah, Sarawak and Singapore merged in 1963, the term still remains pertinent in the present. It can be seen in the Malaysian national holiday of Hari Merdeka, commemorating Malaya's independence on 31 August 1957, and Dataran Merdeka (Independence Square) where the first ceremony raising the flag of Malaya was held following independence. Sabah and Sarawak in North Borneo were to officially join Malaysia on 31 August 1963 but due to opposition from Indonesia and the Philippines and to allow the United Nations team time to conduct referendums in Sabah and Sarawak regarding their participation in a new federation, the date was postponed to 16 September, now celebrated as Malaysia Day. 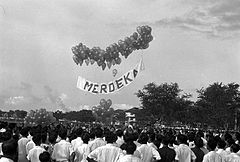 In the context of Singapore, Merdeka usually refers to the gaining of self-rule and self-government from the United Kingdom in the 1950s, as imperialism in Asia slowly declined. It usually does not refer to Singapore's independence from Malaysia in 1965, which followed its merger with Malaya, Sabah and Sarawak on 16 September 1963 after having held the 1962 national referendum.

The call for Merdeka was a growing tension between progressivism and radicalism, cooperation and hostility towards the British. David Saul Marshall of the Labour Front narrowly won the Singapore general election of 1955, but being anticolonialist, tended to be a vocal opponent of the British rule. As such, the British found it hard to work out a compromise. A petition was started in 1956 which collected the signatures of 167,000 — a vast portion of the electorate in that era — in a petition that demanded Merdeka.

During the Merdeka Talks of 1956, the year before Malaya's independence, the British agreed to grant Singapore self-government over domestic issues, while the British retained control of finance and the military. This seemed to satisfy Marshall initially, but the negotiation later broke down when the British refused to turn over internal security to the local government. The British felt that Marshall was not doing enough to counter the threats of the communist insurgency and the Malayan Communist Party (MCP) which had sparked the Malayan Emergency. The march towards independence was stalled and Marshall resigned in 1956 making good on his earlier pledge that he would step down in the case of failure.

Another Labour Front leader Lim Yew Hock took over as Singapore's Chief Minister and continued the effort to push for independence. Lim then undertook harsh measures against the communists demonstrating that his administration was willing to take a tough stance to safeguard internal security. In the Chinese middle schools riots of 1956, some nine hundred people were arrested. Leading a negotiation delegation consisting of several Singapore political leaders from various parties, Lim managed to convince the British to grant Singapore Merdeka by amending and revamping its Constitution in 1958 to allow for a fully elected legislature which would form an internal government with complete autonomy over domestic affairs. This government was formed following the Singapore general election of 1959, but ironically the Labour Front lost as Lim Yew Hock's harsh techniques had alienated large portions of the electorate.

Looking on the Philippines, it has the longest running struggle for the Moro people right to self determination and the cry for merdeka or maradeka had been since 1968 when Datu Udtog Matalam[3] explosively announced the formation of the Mindanao Independence Movement (MIM) and the Muslim fundamentalist Ansar el Islam led by prominent Muslim leaders such as Philippine Muslim Senator Dr. Ahmad Domocao Alonto while leading the Islamic revival movement also supported the formation of the secessionist Moro National Liberation Front (MNLF). The over four decades of Moro struggle asserts freedom from Philippine colonialism as argued by Moro stalwarts Prof. Nur Misuari of MNLF and late Ustadz Salamat Hashims of MILF. Until the present the struggle for freedom and independence still lived on to the younger Moro generation. At the legal front, the Maradeka (literally means freedom) became seen at the forefront of a non-violent political movement enjoying the democratic space afforded to many political groups and activists in the Philippines.

Analytically looking at the history of long peace process since 1975, while East Timor was able to attain full self governance thru a United Nations brokered Determination Vote and Free Aceh Movement acceded to a Norway brokered peace talks, the Moro rebel groups undergone series of protracted peace and a never ending peace process employed only as a counter-insurgency strategy of the Philippine government and not meant sincerely to achieve final solution to the hostilities in the southern part of the Philippines, Mindanao. The double talk policy of the government only exasperated young Moro and students and opting to join extremist group, such as the Abu Sayyaf to mount a violent attacks against the deceptive policy of the Philippine government. The recent debacle in the rejection by the Moro Islamic Liberation Front of the Philippine government's counter-proposal to the former proposal for compromise accession to sub-state formula will put to limbo and further stall the peace negotiations.