The Toyota Dyna is a light truck for commercial use. In the Japanese market, the Dyna is sold alongside its twin called Toyoace. The original Toyoace of 1956 was an improvement over the Toyopet SKB Truck. It was also sold as the Daihatsu Delta[citation needed] and the Hino Dutro (2002 onwards).

The Toyopet Route Truck RK52 was the roots of the Dyna.

Second generation of Toyopet Route Truck, Designed by Kanto Auto Works, Ltd. The frame was shared with the Toyopet RK23 pickup truck and the Toyota Stout.

The Toyopet Route Truck was renamed as the Toyota Dyna in April 1959. 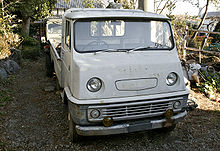 The original semi-cab over Dyna was replaced by the new model K170 Series with leaner design in 1963. The picture shown is the cab over Toyoace, known as the PK series. Australian versions were badged as a Toyota 25. This picture is a PK3# with two single lights, the upgrade added in 1966 was the PK4# series which was fitted with quad lights. There were PK and RK models being powered by the R and P series engines respectively.

The engine for this series is either a 2.0 liter model R gasoline, or a I4 3.0 liter model B and I6 3.6 liter model H diesel. Short and Long Wheelbase Trucks, and Route Vans were available. 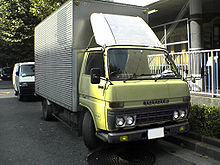 The new smaller Toyoace with Y20 chassis was launched in 1979, while the Dyna was still using the U-platform. In 1984, Toyota introduced the Dyna Rino in Indonesia. The light 4-wheel was built on Y30 platform, and the 6-wheel is named Y40. Early models have round headlights and 3.4-liter 3B and 13B engines. The later models with rectangular headlights, BU are powered by 3.7-liter 14B engines. The Indonesian market Dyna Rino remained in production until 2002. 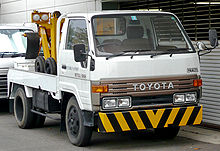 U60 – 90 Series (1984–1994) The first bu series (Dyna 200/300/400, 1984-88) used quad round headlights. 1989 onwards models had quad rectangular headlights and one piece door glass with new interior door trim & other minor interior changes. All wide cab models had a centrally mounted roof vent and had 3 windscreen wipers. 3.4 litre 3B, 3.4 litre (direct injected) 13B and 3.7 litre 14B diesel engines with direct injection were used in the Dyna 200 and Dyna 300 , a 5 speed gearbox was standard. The Dyna 300 was equipped with an exhaust brake. Front, ventilated twin piston disc brakes were optional on the first series wide cab Dyna 300. 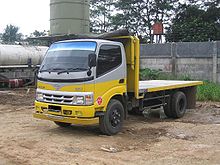 New for this generation is the Hino Dutro, as Toyota owns shares in Hino. In addition to the diesel engine, the Hybrid is also sold in Japan.

These vehicles have emission levels which meet the stringent Euro IV requirements which kicked in in Europe in 2005, in Singapore in October 2006 and which will kick in in Japan in February 2007.