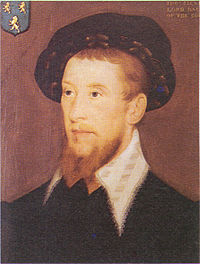 Thomas Fiennes,
9th Baron Dacre of the South. Executed for murder in 1541 when title was forfeit. Armorials of Fiennes Barons Dacre: Azure, 3 lions rampant or[1]

Baron Dacre is a title that has been created three times in the Peerage of England, every time by writ. The first creation came in 1321 when Ralph Dacre was summoned to Parliament as Lord Dacre. He married Margaret, 2nd Baroness Multon of Gilsland, heiress of a large estate in Cumbria centred on Naworth Castle and lands in North Yorkshire around what is now Castle Howard. However, the status of this barony is uncertain after Margaret's death in 1361. Lord Dacre's younger son, the third Baron, was murdered in 1375. He was succeeded by his younger brother, the fourth Baron. The latter's grandson was Thomas Dacre, the sixth Baron. His second son Ralph was summoned to Parliament as Lord Dacre (of Gilsland) in 1459 (see below). However, this new creation became extinct on his death in 1461. Thomas's fifth son, Humphrey, was summoned to Parliament as Lord Dacre of Gilsland in 1482 (for more information on this creation, see below). 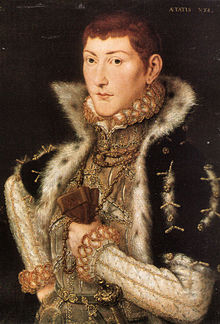 Thomas was succeeded by his granddaughter Joan, the seventh Baroness, the only surviving child of Lord Dacre's eldest son Sir Thomas Dacre (1410–1448)). She was the wife of Sir Richard Fiennes of Herstmonceux Castle, Sussex. In 1459 Richard was summoned to Parliament as Lord Dacre in right of his wife.

While there were two Barons Dacre simultaneously, the Fiennes peers, seated in Sussex, were commonly called Baron Dacre of the South, while their counterparts, seated at Naworth Castle and Gilsland in Cumberland were Baron Dacre of the North. This distinction came to an end in 1569, when the Gilsland title became extinct.

The great-great-grandson of the 7th Baroness, the ninth Baron, is notable for his conviction for murder in 1541, when his title was forfeited. However, his son Gregory was restored to the title in 1558. He was succeeded by his sister Margaret, the eleventh Baroness, the wife of Sampson Lennard. Their great-grandson, the fourteenth Baron, married Elizabeth Bayning, daughter of Paul Bayning, first Viscount Bayning of Sudbury, who in 1674 (after the title had become extinct) was created Viscountess Bayning for life. Their son, Thomas Lennard, 15th Baron Dacre, was created Earl of Sussex in 1674. However, his earldom became extinct on his death in 1715, while the barony of Dacre fell into abeyance between his two daughters the Hon. Barbara and the Hon. Anne. Barbara died childless in 1741 and the abeyance was terminated the same year in favour of Anne, the sixteenth Baroness. She was married three times, firstly to Richard Barrett, secondly to Henry Roper, 8th Baron Teynham, and thirdly to the Hon. Robert Moore, son of Henry Moore, 3rd Earl of Drogheda. She was succeeded by her son from her first marriage, the seventeenth Baron. He died without legitimate issue and was succeeded by his nephew, the eighteenth Baron. He was the son of Hon. Charles Roper, the son of the late Lady Dacre's second marriage to Lord Teynham (the barony of Teynham had been passed on to a son from an earlier marriage of Lord Teynham). On his death the title passed to his sister Gertrude, the nineteenth Baroness. She was the wife of Thomas Brand. 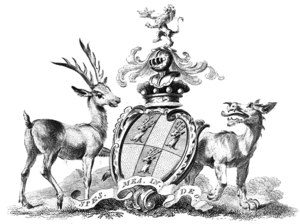 Arms of the Roper family & 18th Baron Dacre: per fesse azure & or, a pale counterchanged & 3 buck's heads erased of the 2nd. Crest: a lion rampant sable holding in the dexter paw a coronet or.[2]

She was succeeded by her son, the twentieth Baron. He notably represented Hertfordshire in the House of Commons. His younger brother, the twenty-first Baron, was a General in the Army. In 1824 he assumed by Royal license the surname of Trevor in lieu of Brand. He was succeeded by his eldest son, the twenty-second Baron. He sat as Member of Parliament for Hertfordshire and also served as Lord Lieutenant of Essex. When he died the title passed to his younger brother, the former Speaker of the House of Commons, Henry Brand, 1st Viscount Hampden, who became the twenty-third Baron Dacre as well.

The barony remained a subsidiary title of the viscountcy until the death of his great-grandson, the fourth Viscount and twenty-sixth Baron, in 1965. The late Viscount was succeeded in the viscountcy by his younger brother while the barony fell into abeyance between his two surviving daughters the Hon. Rachel Leila Douglas-Home and the Hon. Tessa Mary Thompson. The abeyance was terminated in 1970 in favour of the elder daughter, the twenty-seventh and (As of 2010[update]) present holder of the title. She is the widow of the Hon. William Douglas-Home, second son of Charles Cospatrick Archibald Douglas-Home, 13th Earl of Home and younger brother of Prime Minister Sir Alec Douglas-Home.

The noted historian Hugh Trevor-Roper, Baron Dacre of Glanton, was the great-great-great-grandson of Reverend the Hon. Richard Henry Roper, second and youngest son of Anne, 16th Baroness Dacre, from her second marriage to Henry Roper, 8th Baron Teynham. For this reason he chose Dacre of Glanton as the title of the life peerage which he was awarded in 1979 and which he held until it expired upon his death in 2003.