"Michael Joseph" is also an imprint of the Penguin Group of publishers. 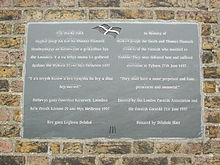 Commemorative plaque in Cornish and English for Michael Joseph the Smith (An Gof) and Thomas Flamank mounted on the north side of Blackheath common, south east London, near the south entrance to Greenwich Park.

Michael Joseph (better known as Michael An Gof, where An Gof is Cornish for "blacksmith"; died 27 June 1497[1]) and Thomas Flamank (a Bodmin landowner's son and London lawyer) were the leaders of the Cornish Rebellion of 1497.

The rebels marched on London to protest at King Henry VII's levying a tax to pay for an invasion of Scotland in retaliation for the Scots' support for the pretender Perkin Warbeck. The Cornish believed that this was a northern affair and had nothing to do with them; they also believed that the tax was the work of the King's corrupt counsellors and marched to London to bring this to the King's attention.

They were hopeful of gaining support from people in Kent – the focus of Jack Cade's rebellion of 1450 – but despite heading to Cade's former rallying site at Blackheath they gained little backing.

As a result, the Cornish rebels were beaten by the King's forces at the Battle of Deptford Bridge on 17 June 1497 on a site adjacent to the River Ravensbourne. An Gof fled to Greenwich after the battle, but was captured and sent to the Tower of London.

As one of the leaders, An Gof was executed with Flamank on 27 June 1497. Deemed to be traitors, they were hanged, drawn and quartered at Tyburn and their heads displayed on pike-staffs on London Bridge. Just before his execution, An Gof is recorded to have said that he would have "a name perpetual and a fame permanent and immortal".

In 1997, the 500th anniversary of the rebellion, a commemorative march ("Keskerdh Kernow 500") was held, retracing the route of the original march from St. Keverne (An Gof's home town in Cornwall) to London. A statue depicting An Gof and Flamank was unveiled in St Keverne and a commemorative plaque was unveiled on Blackheath common.

An Gof's name was later used by a Cornish nationalist extremist organisation.[2]

The Holyer An Gof trophy is an annual award for the best publication on Cornwall,[3] and part of the Cornish Gorsedd (Gorseth Kernow).