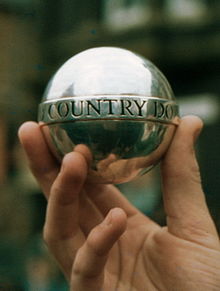 A new Silver Ball with the motto "Town and Country do your best" inscribed on the band. This ball was used at St Columb Major

Cornish Hurling or Hurling the Silver Ball (Cornish: Hyrlîan), is an outdoor team game of Celtic origin played only in Cornwall, United Kingdom. It is played with a small silver ball. The origins may be connected to the Irish game of the same name which allows the use of sticks.

Once played widely in Cornwall, the game has similarities to other traditional football or inter parish 'mob' games, but certain attributes make this version unique to Cornwall. It is considered by many to be Cornwall's national game along with Cornish wrestling. An old saying in the Cornish language goes; "hyrlîan yw gen gwaré nyi" which translated into English means, "Hurling is our sport" [1]

Although the custom attracts fewer spectators, the annual hurling matches at St. Columb Major have the same status in the Cornish calendar as the 'Obby 'Oss festival at Padstow and the Furry Dance at Helston in that all three are unique customs that have survived unchanged and have taken place annually since before records began.

The ball for hurling is made of sterling silver which is hammered into two hemispheres and then bound around a core of applewood which is held together with a band of silver. The band hold screws or nails which hold the ball together. Normally a motto would appear on the band, such as "Town and country - Do your best!". In St Columb the ball was crafted for many years by John Turver, although in the last decade the ball has been made by local craftsman and funeral director Colin Rescorla.[2] The winner of the ball has the right to keep it, but must have a new one made in its place for the next game. The price of a new ball is secret but is said to be around £300. The traditional inscription on the ball was "St Columb Major and Minor / Do your best / In one of your parishes / I must rest."[3]

The ball weighs just over a pound but there is no definitive size or weight, as the ball is hand-made, but generally the weight is about 19 to 21 ounces and is equal in size to a cricket ball.[4]

There are examples of hurling balls on public display at Truro Museum, Lanhydrock House, St Columb Major Post Office and St. Columb Major Town Hall. Many are also held in private hands. One held at Penzance Museum is thought to be very old and bears the following inscription in Kernewek (the Cornish language):

The first two words signify "Men of Paul", i.e., the owners of the ball. The last seven words may be translated literally (retaining the word order of the engraving) into English as "sweet play fair without hate to be called", which may be roughly translated as: "Fair play is good play."[5]

Although the origins of hurling are unknown, one theory is that it derives from the Irish game of hurling and was brought back to Britain after the Norman invasion of Ireland in the 12th century.[6] One instance is recorded of a match between twenty-one Irish players from County Wexford and an equal number of Cornish players which was witnessed by King George I.[7] Hurling is very similar to the game of cnapan; a Celtic form of medieval football played in the southwestern counties of Wales, especially Carmarthenshire, Ceredigion and Pembrokeshire, until the nineteenth century.[8][9]

Another theory suggests that it is linked with a Pagan fertility rite, with a silver ball being cast up in honour of the sun. With the coming of Christianity it is believed this was turned into a game.[10] The game's origins are thus thought to be over 1000 years old. The Orkney 'Ba' Game', which has been played on Christmas Eve and Hogmanay every year since the mid 19th century, has some similarity to Cornish Hurling.[11]

Little is recorded of the sport until about the 16th century when contests were generally between groups of men from two parishes.[12] At this point there were two forms of the game, according to Carew's Survey of Cornwall (1602). "Hurling to goals" was played on a pitch similar to that of modern-day football, and had many strict rules, similar to those of football and rugby; this was common in the east of the county. "Hurling to country", however, was often played over large areas of countryside and despite its name also involved goals; this was common in the west of the county. This had few rules and was more similar to the St Columb game of modern times (see below).[13] Inter-parish matches died out towards the end of the 18th century but matches between different sections of the same township continued. At St Ives those named Tom, Will and John formed a team to play against those with other names on the Monday after Quadragesima. At Truro a team of married men played against a team of bachelors, and at Helston the men of two particular streets played against the men of the others. The field of the St Ives game has been changed twice, first to the beach, and in 1939 to the public park.[14]

The game is known to have originated over 500 years ago. In the last 100 years there have been only two lost balls.

Modern survival of the game

Up until the 19th century the game was still relatively common, with many Cornish towns and villages holding a match on feast and fair days, and games between St Columb Major and Newquay survived into the early 1900s.[15]

The matches at St Columb and St Ives, and the game played as part of the beating the bounds ceremony at Bodmin[16] are the only instances of the sport today.

At St. Columb Major on Shrove Tuesday and on the second Saturday following, a much rougher and traditional version of the game is played. The game involves a physical battle on the streets and in the surrounding countryside, between the "Townsmen" and "Countrymen" of the parish, with the shops in the town barricading their windows and doors to protect from accidental damage, which sometimes occurs.

The game starts with the throw-up at 4:30 p.m, usually followed by a large scrum. The ball is thrown to the crowd at the Market Square and the objective of the game is to control its possession with deliberate passing, throwing, snatching and tackling. Game play in the town normally lasts no longer than one hour. During this period the two teams are irrelevant, i.e. townsmen 'deal' the ball to countrymen and vice versa. Play often stops for spectators to touch the ball for luck or fertility or slows to allow younger players to participate. After about an hour the ball is hurled towards respective goals that are set about two miles (3 km) apart, at either end of the town. Very often, if a route to the goals is impractical, however, players may carry the ball through the roads and fields that surround the town, with the aim of taking the ball across the Parish boundary. In this latter stage of the match the two sides strive for possession, and the actual "Town against Country" hurling takes place.

The 'winner of the ball' (that is, the hurler that goals the ball or carries it over the boundary) is carried on the shoulders of two team-mates back to Market Square, to strains of the "hurling song". Here he calls up the ball, declaring "Town Ball" or "Country Ball", depending on the side to which he belongs.

At 8:00 p.m., the winner returns to Market Square to call up the ball again. This is followed by a visit to each of the public houses of the town, where the ball is immersed in gallon jugs filled with beer. Each gallon will be 'called up' and the 'silver beer' (as it is known), is shared amongst all those present.

The game as played at St. Ives (annually)

The annual St. Ives hurling match happens on Feast Monday each February (the feast is on the Sunday nearest to February 3). The game starts at 10.30am when the silver ball is thrown from the wall of the Parish Church by the Mayor to the crowd below on the beach. The ball is passed from one to another on the beach and then up into the streets of St. Ives. The person in possession of the ball when the clock strikes noon takes it to the Mayor at the Guildhall and receives the traditional reward of five shillings. At one time the game was played by the men of the village. These days it is played by the children.

The game as played at Bodmin (roughly every 5 years)

It is a little known fact that Hurling survives as a traditional as part of Beating the bounds at Bodmin, commencing at the close of the 'Beat'. The game is organised by the Rotary club of Bodmin and was last played in 2010. The game is started by the Mayor of Bodmin by throwing a silver ball into a body of water known as the "Salting Pool". There are no teams and the hurl follows a set route. The aim is to carry the ball from the "Salting Pool" via the old A30, along Callywith Road, then through Castle Street, Church Square and Honey Street to finish at the Turret Clock in Fore Street. The participant carrying the ball when it reaches the turret clock receives a £10 reward from the Mayor.[17] The next occurrence of the Bodmin Hurl will be following the next beating of the bounds, which is unlikely to take place until 2015.

The town of Helston used to hold a hurl following the 'beating of the bounds', but the tradition there died out in the early 20th century.[18]

On Craddock Moor, near Minions, are "The Hurlers". These consist of three separate Bronze Age stone circles with thirteen, seventeen and nine surviving stones. Local tradition maintains that they are men turned to stone for profaning the Lords Day by taking part in a hurling match. The arrangement of the stones led to the name and was recorded as far back as 1584 by John Norden.[19]

The Cornish-men they are stronge, hardye and nymble, so are their exercises violent, two especially, Wrastling and Hurling, sharpe and seuere actiuties; and in neither of theis doth any Countrye exceede or equall them. The firste is violent, but the seconde is daungerous: The firste is acted in two sortes, by Holdster (as they called it) and by the Coller; the seconde likewise two ways, as Hurling to goales, and Hurling to the Countrye.

According to the law, or when the ball to throw;
And drive it to the gole, in squadrons forth they goe;
And to avoid the troupes (their forces that forlay);
Through dykes and rivers make, in the rubustious play; [21]

That the hurler must deal no foreball, or throw it to any partner standing nearer the goal than himself. In dealing the ball, if any of the adverse party can catch it flying ... the property of it is thereby transferred to the catching party; and so assailants become defendants, and defendant assailants.

William Trevarthen buried in the church. A margin note in the churchwardens accounts explains "Being disstroid to a hurling with Redruth men at the high dounes the 10th day of August".