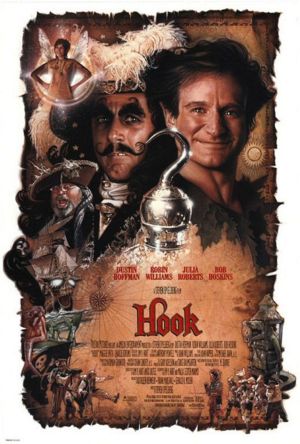 "Hook" is a 1991 family directed by . The film stars , , , , and . "Hook" acts as a sequel to 's adventures, focusing on a grown-up Peter Pan who has forgotten his childhood. Peter Banning is a successful corporate lawyer with a wife and two kids. kidnaps his two children, thus Peter Banning must return to and reclaim his youthful spirit as Peter Pan in order to challenge his old enemy.

Spielberg began developing the film in the early-1980s with Walt Disney and , which would have followed the storyline seen in the 1953 animated film and 1924 silent film. "Peter Pan" entered in 1985, but Spielberg abandoned the project. developed the script with director and before Spielberg decided to direct in 1989. "Hook" was shot entirely on s at in . The film received negative reviews but was a financial success and was nominated multiple times at the .

Years ago, left and married 's granddaughter Moira. As corporate lawyer Peter Banning, he has entirely forgotten his childhood as Peter Pan. He becomes a successful who never has time for his wife Moira and kids, Jack and Maggie. The family travels to to visit Wendy, now very old and being honored for her work caring for orphans. Jack and Maggie are kidnapped by , who survived his run-in with the crocodile. Wendy tries to tell Peter of his past, but he does not believe her.

visits Peter that night, taking him to Neverland. He wakes up among the pirates; then, observing Hook boasting of kidnapping Peter's children to use as bait, Peter reveals himself. Hook is disgusted at his nemesis' ineffectual condition. Hook's Smee concludes that being away from Neverland for so long has wiped his memory clean of the past. Hook is ready to have Peter and his children killed, but Tinker Bell talks him into giving Peter three days to train for a duel. She takes Peter to the Lost Boys, led by Rufio, who initially don't believe he's Peter Pan. Tinker Bell convinces them that he is Pan, and they re-train him. Peter is hampered by his inability to remember being a boy or how to fly. At the same time Hook decides to "teach" Peter's children to love him as a means of demoralizing Peter when the day comes. Although Maggie does not fall for the ploy, the often-overlooked Jack listens, and with Hook cheering him on at a pirate baseball game (as his father had failed to do), he comes to accept the pirate as a .

With the help of Tinker Bell becoming human-sized and kissing him, Peter manages to find his flight-enabling "happy thought": his love for Moira and becoming a father, the reasons he left Neverland. Peter leads the Lost Boys into battle with the pirates. Rufio takes on Hook while Peter rescues his son and daughter. Rufio dies, his last words telling Peter that he wishes he had a father like him. Jack is finally convinced that his father cares for him, and pleads to go home. Realizing that Hook will not stop and that he will return to threaten his family time and again, he resumes the duel. It ends when the giant crocodile comes back to life and swallows Hook. Peter passes on his sword and leadership to the biggest of the Lost Boys, Thud Butt, and flies back to London with his children. He awakens in his regular clothes at the famous statue of Peter Pan in , and sees Tinker Bell one last time. He assures her that he still believes in fairies, and she leaves. He returns to his family, finally remembering who he is, and appreciating them all as he should.

* as Peter Banning / : He has forgotten his childhood in Neverland, and becomes a successful with a wife and two kids. Captain Hook kidnaps his two children, thus Peter Banning must reclaim his youthful spirit as Peter Pan in order to challenge Hook.
* as : A villainous pirate who has had a long enemy-relationship with Peter Pan. Hook's motives over the years after escaping from his death include revenge against Peter, by kidnapping his two children.
* as : A who helps Peter gain memory of his childhood and "happy thoughts". She is in love with Peter, but understands why he must continue his relationship with his family.
* as Jack Banning: Peter's son who begins to rebel against his father by looking towards Captain Hook as a .
* as Maggie Banning: Peter's daughter and Jack's younger sister who, after the kidnapping, does not fall under Hook's ploy of "why parents hate their children".
* as Smee: Hook's who creates the plan of trying to convince Peter's children to "love" Hook. Hoskins also portrays a garbage sweeper in .
* as Moira Banning: Wendy's granddaughter with whom Peter falls in love.
* as : After her adventures with Peter Pan, she becomes well-known for helping orphans. appears as young Wendy Darling in s.
* as Rufio: Leader of the Lost Boys after Peter's departure. Rufio is intimidated by his presence at first but soon wishes he had a father like Peter. He is killed by Captain Hook during a duel.
* as Tootles: A senile old man living with Wendy. A former Lost Boy, Tootles is also Wendy's "first orphan". Peter helps giving him the ability to fly by finding his lost marbles, which he left in Neverland.

makes a as Peter Pan's mother, while and portray Lost Boys.

considered writing a story in which Peter Pan grew up; his 1920 notes for the latest stage revival of "Peter Pan" included possible titles for another play: "The Man Who Couldn't Grow Up" or "The Old Age of Peter Pan". [cite book | author = | title = J.M. Barrie and the Lost Boys | publisher = | date =2003 | location = | pages = | id = ISBN 978-0300098228] The genesis of "Hook" started when director Steven Spielberg's mother often read him "" as . Spielberg explained in 1985, "When I was eleven years old I actually directed the story during a school production. I have always felt like Peter Pan. I still feel like Peter Pan. It has been very hard for me to grow up, I'm a victim of the . [McBride, p.42&mdash;43]

Spielberg began to develop the film with in the early-1980s, which would have closely followed the storyline of the 1953 animated film and 1924 silent film.

Meanwhile, Paramount and Hart moved forward on production with as director. Hart began to work on a new storyline when his son, Jake, showed his family a drawing. "We asked Jake what it was and he said it was a crocodile eating Captain hook, but that the crocodile really didn't eat him, he got away," Hart reflected. "As it happens, I had been trying to crack "Peter Pan" for years, but I didn't just want to do a remake. So I went, 'Wow. Hook is not dead. The crocodile is. We've all been fooled'. In 1986 our family was having dinner and Jake said, 'Daddy, did Peter Pan ever grow up?' My immediate response was, 'No, of course not'. And Jake said, 'But what if he did?' I realized that Peter did grow up, just like all of us baby boomers who are now in our forties. I patterned him after several of my friends on , where the pirates wear three-piece suits and ride in limos."

By 1989, Hart and Castle changed the title of "Peter Pan" to "Hook", and took it from Paramount to , ran by , who was Spielberg's first . signed on, but Williams and Hoffman had creative differences with Castle. Medavoy saw "Hook" as a vehicle for Spielberg, and Castle was fired, but paid with a $500,000 settlement.

Spielberg found close personal connection to the film. The troubled relationship between Peter and his son echoed Spielberg's relationship with his father. Previous films of Spielberg that explored a diminishing father-son relationship included "" and "". Peter Banning's "quest for success" paralleled Spielberg starting out as a and transforming into a Hollywood . This led to Spielberg's divorce with , which would possibly lead to Banning's relationship with his family. [McBride, p.413] "I think a a lot of people today are losing their imagination because they are work-driven. They are so self-involved with work and success and arriving at the next plateau that children and family almost become incidental. I have even experienced it myself when I have been on a very tough shoot and I've not seen my kids except on weekends. They ask for my time and I can't give it to them because I'm working."

Spielberg, Williams and Hoffman did not take salaries for the film. Their deal called for the trio to split 40% of TriStar Pictures' gross revenues . They were to receive $20 million from the first $50 million in gross theatrical film rentals, with TriStar keeping the next $70 million in rentals before the three resumed receiving their percentage.