Empire of the Sun (film)

Empire of the Sun (film) 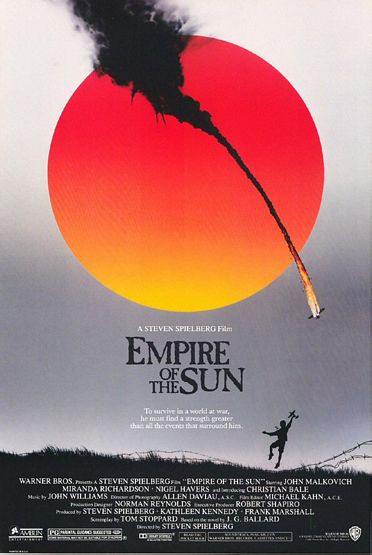 "Empire of the Sun" is a fy|1987 epic based on 's semi-autobiographical novel of the same name. directed the film, which stars , , and . "Empire of the Sun" tells the story of Jamie "Jim" Graham, who goes through a from living in a wealthy British family in , to becoming a in , a Japanese , during .

and were originally to direct before Spielberg came on board. Spielberg was attracted to directing "Empire of the Sun" because of a personal connection to Lean's films and World War II topics. He considers "Empire of the Sun" to be his most profound work on "the loss of innocence". While Ballard's novel had heroism as a theme, Spielberg once again created a film that dealt with children being separated from their parents. However, although the film was critically acclaimed, it was not a box office success.

The had occupied China since 1937 before declaring war on the United States, Great Britain and Holland. As a result of the conflict, Jamie Graham, a British schoolboy living in , is separated from his parents. He spends months living in his deserted house and eating remnants of food. He ventures into Shanghai and finds it bustling with Japanese troops. Jamie is captured with an American named Basie, who renames him "Jim". They are taken to . By 1945, a few months before the end of the , Jim has established a good living, despite the poor conditions of the camp. He has an extensive trading network, even involving the camp's commanding officer, Sergeant Nagata, from whom he casually steals a bar of soap.

Dr. Rawlins, the camp's British director, becomes a father figure to Jim. Through the barbwire fencing, Jim befriends a Japanese teenager, who shares Jim's dream of becoming a pilot. Jim still idolizes Basie and visits him in the American soldiers' barracks. He is attracted to the Americans, whose laid-back differs from the dull British counterparts. Basie charges Jim to set snare traps outside the wire of the camp. Jim succeeds, thanks to the help of the Japanese teenager from the other side of the barbed wire. As a reward, Basie allows him to move into the American barracks with him. Basie then plots to escape. His reason to send Jim in the marsh was to test the area for mines, and not to catch s.

Nagata visits Basie's barracks, and finds soap that Jim had stolen earlier. Thinking that Basie stole the soap, Nagata has him severely beaten. After spending several days in the infirmary, the other men steal Basie's possessions. One morning at dawn, Jim witnesses a ritual of three Japanese pilots at the air base. Overcome with emotion at the solemnity of the ceremony he begins to sing the same Welsh hymn. As the pilots take off on their suicide mission, the base is suddenly attacked by a small number of s, prompting the Japanese to evacuate the camp. Basie eventually escapes. Meanwhile, the last remaining Zero fails to start and take off, the improvised pilot being the friendly Japanese teenager, who breaks down in tears, ashamed. The camp's population marches through the wilderness, where many die. Jim also witnesses a flash from the atomic bombing of Nagasaki hundreds of miles away.

He goes back to Suzhou, barely able to live through . He finds the same Japanese boy he knew angrily slashing at the plants in the marsh with his . The boy calms down and offers Jim a , but is shot dead by one of Basie's companions, who have arrived to loot containers. Jim is furious and throws the man who shot his friend into the marsh and begins to beat him. Basie drags him off and promises to take him back to Shanghai to find his parents, but Jim refuses the offer and stays behind. He is found by a unit of American soldiers and put in an orphanage in Shanghai with other children who lost their parents. Jim, scarred with his experiences from the war, does not recognize his parents. His mother finds him in the crowd, with Jim collapsing into his mother's arms.

* as James "Jamie" Graham: Jamie goes through a from living in a wealthy British family in , to becoming a in during . felt Bale had a physical resemblance to himself at the same age.

* as Basie: An American soldier stranded in Shanghai during Japanese occupation. Basie forms a friendship with Jamie, giving him the nickname of "Jim".

* as Mrs. Victor: A British woman who was Jim's "neighbor" at Suzhou. She dies in the wilderness, where Jim sees a bright light in the sky to the East. He believes it to be her floating to but finds out later it was the flash from one of the Atomic bombing of Nagasaki, hundreds of miles away.

;Cast notes:
*Small roles in the film by notable actors include and as American soldiers, with and as Japanese soldiers. Ballard makes a at the scene.

purchased the , intending to direct and Robert Shapiro to produce.

"Empire of the Sun" was filmed at in the United Kingdom, and on location in and . The filmmakers searched across in an attempt to find locations that resembled 1941 . They entered negotiations with s and in 1985.

In his first starring role, Bale received a special citation for Best Performance by a Juvenile Actor from the , an award specially created for his performance in "Empire of the Sun". [cite web | url = http://www.variety.com/profiles/people/AwardsByYear/National%20Board%20of%20Review%20Special%20Citation/1987/29311/Christian+Bale.html?dataSet=1 | title = National Board of Review Special Citation: 1987 Awards | work = Variety | accessdate = 2008-09-16] At the , "Empire of the Sun" was nominated for Art Direction, Cinematography, Editing, Original Music Score, Costume Design and Sound. It did not convert any of the nominations into awards. [cite web | title = 60th Academy Awards | url = http://www.imdb.com/Sections/Awards/Academy_Awards_USA/1988 | work = | accessdate = 2008-09-16] , who was nominated as cinematographer, publicly complained, "I can't second-guess the Academy, but I feel very sorry that I get nominations and Steven doesn't. It's his vision that makes it all come together, and if Steven wasn't making these films, none of us would be here."

Flying symbolizes Jim's possibility and danger to escape from the prison camp. His growing alienation from his prewar self and society is reflected in his hero-worship of the Japanese aviators based at the airfield adjoining the camp. "I think it's true that the Japanese were pretty brutal with the Chinese, so I don't have any particularly sentimental view of them," recalled. "But small boys tend to find their heroes where they can. One thing there was no doubt about, and that was that the Japanese were extremely brave. One had very complicated views about patriotism [and] loyalty to one's own nation. Jim is constantly identifying himself, first with the Japanese, then when the Americans start flying over in their Mustangs and B-29s, he's very drawn to the Americans."

The apocalyptic wartime setting and the climatic moment when Jim sees the distant white flash of the atomic bombing of Nagasaki gave Spielberg powerful visual metaphors "to draw a parallel story between the death of this boy's innocence and the death of the innocence of the entire world." [McBride, p.393] Spielberg reflected he "was attracted to the idea that this was a death of innocence, not an of childhood, which by my own admission and everybody's impression of me is what my life has been. This was the opposite of . This was a boy who had grown up too quickly."

The opening of the movie noted that "In 1941, China and Japan had been in undeclared war for four years". The had commenced the with the in July 1937, although the Shōwa regime's propaganda refer to the invasion as "Holy War" ("seisen"); the official name given to the conflict by the regime was China Incident ( _ja. 支那事変, "Shina Jihen").