Don Bosco Technical College (DBTC or simply Don Bosco Mandaluyong) is a private Catholic educational institution owned and operated by the Salesians of Don Bosco. DBTC is deemed as the "Motherhouse of all Salesian Works in the Philippines," making it the premier Salesian institution for higher-learning in the country. [1] Its campus is located at 736 General Kalentong Street in Mandaluyong City, Metro Manila, Philippines.

It is part of the IUS or the Istituzioni Universitarie Salesiane (Salesian University Institutions), the Don Bosco Educational Apostolate of the Philippines and the Don Bosco Philippines North Province (DB-FIN). Don Bosco Mandaluyong was awarded with the ISO 9001:2000 certification (Certificate No. 6720) by Moody International Certification (Malaysia) Sdn. Bhd. and United Kingdom Accreditation Service.

Don Bosco Mandaluyong is envisaged as one of the 'big three' schools in Mandaluyong City, together with La Salle Green Hills and Lourdes School of Mandaluyong, which also offer all-boys elementary education and all-boys secondary education. These three are well-renowned educational institutions, synonymous to the city's moniker. [2]

The seal is bordered on top by the school's motto: Ascende Superius, which means "come up to a higher place".

At the center of the seal is a cross symbolizing the primacy of Christian Catholic education and formation of the institution. The cross rests on a salakot-a traditional Filipino hat-to signify the distinct Filipino character.

Between the horizontal section of the cross and the salakot is the founding year of the school, 1953; appearing atop three lines. The lines represent the three elements of Don Bosco's Preventive System of Education, namely: Reason (principle-driven life), Religion (spirituality) and Loving Kindness (connectedness and mutuality). The lines which resemble waves or daluyong in the local language, recall the legendary origin of the community of Mandaluyong. Tradition has it, that the name of the city where the school is located originated from the abundance of the waves or "mga daluyong".

The half-gear on the left and the laurel leaves on the right that surround the central design are emblematic respectively of technical and academic education.

Don Bosco Technical College stands on historic and hallowed grounds. The 18th century Spanish building (1716) at the heart of the campus is a testimony to events that led to the 1896 uprising of the countrys patriots, the Katipuneros, against the Spanish colonizers.

The building later became the Asilo de Mandaloya, an orphanage where the saintly Mother Consuelo Barcelo y Pages stayed for 16 years (1883–1899). She co-founded the Augustinian Sisters of Our Lady of Consolation. Her cause for canonization has been introduced.

Early in the 20th century, the building became the San Carlos Seminary, home for the formation of the local clergy. One of them was Rufino Cardinal Santos, the first Filipino cardinal of the Church.

Don Bosco Mandaluyong opened as a school aptly named Don Bosco Technical Institute-Mandaluyong on 2 June 1953 with 47 first year high school students. More and more students heard of this different school, with an innovative dual academic and technical curriculum. By its first graduation in 1957, the enrollment for the elementary and high school levels increased tremendously, representing a cross section and a happy blend of the poor and the affluent.

From its crude beginning, the Salesian work in Mandaluyong immediately gained efficiency and prominence. By January 1954, feast of the Epiphany, Fr. Mario Acquistapace, SDB (Provincial Superior), declared Don Bosco Mandaluyong the motherhouse of the Salesian works in the Philippines.

The College Department made history in 2004 with the acceptance of 28 first year females. By going co-ed, Don Bosco Mandaluyong is giving a statement to a world where women are devalued and degraded that men must relate with women as equal in dignity.

This evolution of the character of the college department from an exclusively male school to a co-educational institution is in preparation for the strategic plan of the department to achieve university status in the few years ahead. Along with this are new courses being introduced every year besides the engineering courses that Don Bosco Technical College has become well respected for.

The primary grades have been revived in the Mandaluyong campus in school year 2005-2006. In 1989, seven sections each of grades 1 to 4 were moved to the Salesian Sisters school in Sta. Mesa, Manila. Because of the dwindling number of boys enrolling in the primary levels in Don Bosco School Manila, the Mandaluyong campus has re-opened the primary levels for consistency in character formation and curriculum development, specifically information literacy, as well as for earlier intervention in family life.

The Don Bosco Technical College-High School is a Catholic secondary school for boys with a population of approximately 1000 students. It takes off from the Grade School to prepare young people for higher education and for life. Its current Principal is Fr. Onofre G. Inocencio, SDB, while the current Spiritual Moderator is Fr. Bernard Nolasco, SDB.

The program that the High School offers ideally prepares its students for any academic course that they wish to pursue in College. Its Technical Program, however, gives an edge to graduates who wish to pursue engineering or a technical course. The human, spiritual, emotional, and moral formation they get makes them ready to face the challenges of the world out there, in a spirit of service and love for others, especially the marginalized members of society.

Its entire department is located within two edifices (Blessed Philip Rinaldi Bldg. and the Doña Cecilia Bldg.) connected with each other, together with the Savio Quadrangle. Classrooms are located along the 2nd Floor corridor of the Doña Cecilia Bldg. and the 2nd & 3rd Floor corridors of the Bl. Philip Rinaldi Bldg. The Rinaldi Bldg. also houses the offices for the Assistant Principals for Academic and Technical Affairs, the Student Council, the publications team, the PAASCU, Academic, Technical, Pastoral, and Physical Education/Music faculties, science laboratories, mechanical workshops, drafting laboratory, electro-electrical laboratories, music room, creative room, and the St. Dominic Savio Auditorium; while the Doña Cecilia Bldg. houses the offices of the Principal, and the Assistant Principals for Student and Pastoral Affairs.

Don Bosco Mandaluyong has always been known since its foundation in 1953 for its dual academic-technical curriculum. Students undergo development and growth in all the academic courses as prescribed by the Department of Education (DepEd) --- Mathematics, Science, English, Filipino, Social Studies, Christian Living, PE, Arts, and Music. At the same time, they are the beneficiaries of a Technical Program that inculcates the knowledge, skills, attitudes, and habits of a technical man.

Besides the specialized subjects in electronics, industrial drafting, industrial electricity, computer technology, and mechanics, every year level includes information technology and each student is oriented towards entrepreneurship.

Beginning school year 2008-2009, the high school department opens its science track. The first and second year levels follow the standardized curriculum set by the Office of the Development of the Educational Apostolate of Don Bosco Schools and Training Centers in the Don Bosco Philippines-North Province. In the third and fourth year levels, students get to choose one specialization from the technical courses, as well as the science track.

An ad campaign for the revival of the DBTC Grade School

The Don Bosco Technical College-Grade School is a Catholic elementary school for boys, offering a preparatory level until grade 6. Classrooms and playgrounds for the primary levels (Prep to Grade 3) are located at the ground floor of the Doña Cecilia Building while the classrooms of the intermediate levels (Grade 4 to 6) are located at the 2nd and 3rd floors of the Grade School/ITC Building.

The Grade School Department advocates Information Literacy as its approach to the basic curriculum required by the Department of Education.

Government recognition for the complete primary grades of Don Bosco Mandaluyong was granted on June 9, 1959. Four sections of Preparatory and Grade One started classes at the ground floor of the Old Building, and two sections each of the Grades Two to Four held classes in the newly constructed Doña Cecilia Building.

The Salesians whose pastoral service is directed to boys and young men made a difficult choice when DBTC was chosen to house a Technology Center - a joint project of the Philippine and Italian governments consisting of the transfer of new technologies in the Mechanical, Electronics & Communications, Computer and Instrumentation fields through new laboratory equipment for both the Technician and Engineering courses.

Space and facilities were needed so the Salesians of Mandaluyong had to make a challenging option: to keep the adolescents and young adults in their care, and transfer the tots and the pre-adolescents to the Salesian Sisters, who at the time were constructing their school in Sta. Mesa, Manila.

In the summer of 1989, the equipment of the Technology Center arrived. In June of that year, the boys of the Preparatory classes and Grades One to Four moved to their new classrooms in Don Bosco School-Manila.

Today, DBTC is reviving the primary levels. As Christian educators, they believed that education in the faith begins in the child's earliest years. Boys educated in the faith through strong spiritual formation will grow to be men of character reasonable, mature in judgment and balanced in choices.

The MSTC was established in 1971 primarily to assist the youth of various communities by offering technical training as a means of acquiring manpower skills.

Don Bosco Mandaluyong is a member school of the National Collegiate Athletic Association (Philippines) South, which consists of schools from the CALABARZON Region (south of Metro Manila) and most central and southern parts of the National Capital Region. Distinguished from the NCAA Philippines-Main, NCAA-South's founding members were mostly sister schools of the NCAA-Main member schools. Don Bosco Technical College played host to the 2007-2008 9th NCAA Philippines-South Season.

International affiliations are the Istituzioni Universitarie Salesiane (IUS) corresponding to the international recognition of being a Salesian institution, the Moody International Certification (International Organization for Standardization), and the United Kingdom Accreditation Service (UKAS). 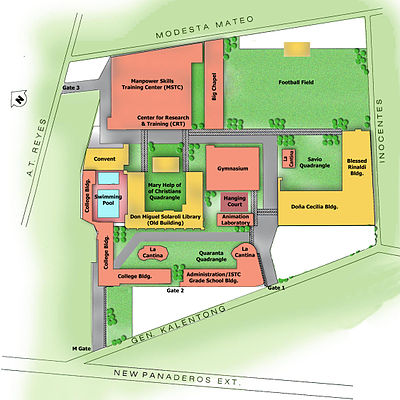 These are young men of character. The uniqueness and richness of their character are made visible in their stories. Unlike sensational stories about youth in media today, these stories are extraordinary because they are the stuff of heroes and saints. Goodness has a star, rather than a stigma. And God placed at the center of life makes life honorable rather than haunted. Every year, the Natatanging Bosconian award is conferred during the graduation rites to alumni who are men of service as well as they are men of influence in their chosen careers. These are men awarded by the school the Pro Deo et Patria medal because of their acknowledged competence and significant achievements as professionals and because of their practical day-to-day testimony of their Christian faith and patriotism. These are: