The House of Wangchuck (Tibetan: དབང་ཕྱུག་རྒྱལ་བརྒྱུད་, Wylie: Dbang-phyug Rgyal-brgyud) has ruled Bhutan since it was reunified in 1907. Prior to reunification, the Wangchuck family had governed the district of Trongsa as descendants of Dungkar Choji. They eventually overpowered other regional lords and earned the favour of the British Empire. After consolidating power, Penlop of Trongsa Sir Ugyen Wangchuck was elected hereditary King of Bhutan, or Druk Gyalpo ("Dragon King"), thus founding the royal house.

The Wangchuck dynasty centralized government power in Bhutan and established relations with the British Empire and India under its first two monarchs. The third, fourth, and fifth (current) monarchs have put the kingdom on its path toward democratization, decentralization, and development.

There have been five Wangchuck kings of Bhutan, namely:

The ascendency of the House of Wangchuck is deepy rooted in the historical politics of Bhutan. Between 1616 and 1907, varying administrative, religious, and regional powers vied for control within Bhutan. During this period, factions were influenced and supported by Tibet and the British Empire. Ultimately, the hereditary Penlop of Trongsa, Ugyen Wangchuck, was elected the first Druk Gyalpo by an assembly of his subjects in 1907, marking the ascendency of the House of Wangchuck.

Further information: History of Bhutan and Dual system of government

Under Bhutan's early theocratic dual system of government, decreasingly effective central government control resulted in the de facto disintegration of the office of Shabdrung after the death of Shabdrung Ngawang Namgyal in 1651. Under this system, the Shabdrung reigned over the temporal Druk Desi and religious Je Khenpo. Two successor Shabdrungs – the son (1651) and stepbrother (1680) of Ngawang Namgyal – were effectively controled by the Druk Desi and Je Khenpo until power was further splintered through the innovation of multiple Shabdrung incarnations, reflecting speech, mind, and body. Increasingly secular regional lords (penlops and dzongpons) competed for power amid a backdrop of civil war over the Shabdrung and invasions from Tibet, and the Mongol Empire.[1] The penlops of Trongsa and Paro, and the dzongpons of Punakha, Thimphu, and Wangdue Phodrang were particularly notable figures in the competition for regional dominance.[1][2]

Chogyal Minjur Tenpa (1613–1680; r. 1667–1680) was the first Penlop of Trongsa (Tongsab), appointed by Shabdrung Ngawang Namgyal. He was born Damchho Lhundrub in Min-Chhud, Tibet, and led a monastic life from childhood. Before his appointment as Tongsab, he held the appointed post of Umzey (Chant Master). A trusted follower of the Shabdrung, Minjur Tenpa was sent to subdue kings of Bumthang, Lhuntse, Trashigang, Zhemgang, and other lords from Trongsa Dzong. After doing so, the Tongsab divided his control in the east among eight regions (Shachho Khorlo Tsegay), overseen by Dungpas and Kutshabs (civil servants). He went on to build Jakar, Lhuentse, Trashigang, and Zhemgang Dzongs.[3]:106

Within this political landscape, the Wangchuck family originated in the Bumthang region of central Bhutan.[4] The family belongs to the Nyö clan, and is descended from Pema Lingpa, a Bhutanese Nyingmapa saint. The Nyö clan emerged as a local aristocracy, supplanting many older aristocratic families of Tibetan origin that sided with Tibet during invasions of Bhutan. In doing so, the clan came to occupy the hereditary position of Penlop of Trongsa, as well as significant national and local government positions.[5]

Although Bhutan generally enjoyed favorable relations with both Tibet and British India through the 19th century, extension of British power at Bhutan's borders as well as Tibetan incursions in British Sikkim defined politically opposed pro-Tibet and pro-Britain forces.[6] This period of intense rivalry between and within western and central Bhutan, coupled with external forces from Tibet and especially the British Empire, provided the conditions for the ascendancy of the Penlop of Trongsa.[5]

After the Duar War with Britain (1864–65) as well as substantial territorial losses (Cooch Behar 1835; Assam Duars 1841), armed conflict turned inward. In 1870, amid the continuing civil wars, Penlop Jigme Namgyal of Trongsa ascended to the office of Druk Desi. In 1879, he appointed his 17-year-old son Ugyen Wangchuck as Penlop of Paro. Jigme Namgyal reigned through his death 1881, punctuated by periods of retirement during which he retained effective control of the country.[7]

The pro-Britain Penlop Ugyen Wangchuck ultimately prevailed against the pro-Tibet and anti-Britain Penlop of Paro after a series of civil wars and rebellions between 1882 and 1885. After his father's death in 1881, Ugyen Wangchuck entered a feud over the post of Penlop of Trongsa. In 1882, at the age of 20, he marched on Bumthang and Trongsa, winning the post of Penlop of Trongsa in addition to Paro. In 1885, Ugyen Wangchuck intervened in a conflict between the Dzongpens of Punakha and Thimphu, sacking both sides and seizing Simtokha Dzong. From this time forward, the office of Desi became purely ceremonial.[7]

Trongsa Penlop Ugyen Wangchuck, firmly in power and advised by Kazi Ugyen Dorji, accompanied the British expedition to Tibet as an invaluable intermediary, earning his first British knighthood. Penlop Ugyen Wangchuck further garnered knighthood in the KCIE in 1904. Meanwhile, the last officially recognized Shabdrung and Druk Desi had died in 1903 and 1904, respectively. As a result, a power vacuum formed within the already dysfunctional dual system of government. Civil adminstration had fallen to the hands of Penlop Ugyen Wangchuck, and in November 1907 he was unanimously elected hereditary monarch by an assembly of the leading members of the clergy, officials, and aristocratic families. His ascendency to the throne ended the traditional dual system of government in place for nearly 300 years.[6][8] The title Penlop of Trongsa – or Penlop of Chötse, another name for Trongsa – continued to be held by crown princes.[9]

The reign of the Second King Jigme Wangchuck (1926–1952) was characterized by an increasingly powerful central government and the beginnings of infrastructure development. Bhutan also established its first diplomatic relations with India under the bilateral Treaty of Friendship, largely patterned after the prior Treaty of Punakha.[10]

The Third King Jigme Dorji Wangchuck (r. 1952–1972) ascended the throne at the age of 16, having been educated in England and India. During the reign of the Third King, Bhutan began further political and legal reforms and started to open to the outside world.[7] Notably, the Third King was responsible for establishing a unicameral National Assembly in 1953 and establishing relations with Indian Prime Minister Jawaharlal Nehru in 1958. Under Jigme Dorji Wangchuck, Bhutan also modernized its legal codes.[11]

Relations with the Dorji family 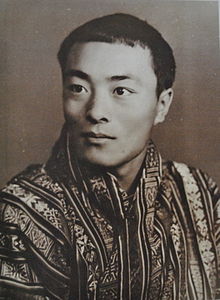 The powerful Dorji family, unlike the Wangchucks, do not have independent roots in legendary monks or historical figures. In fact, the Dorji family was not among the elite families, but became prominent through their ties to the Wangchuck family and to the British.[12] Kazi Dorji had advised the future First King to mediate between the British and Tibet,[13]:35 and it was Kazi Dorji who was later responsible for the large-scale induction of Nepalis into Bhutan.[12] During the early years of the Dorji family's prominence, members of the family served as gongzim (chief chamberlain, the top government post),[10] and their official residence was at the palatial Bhutan House at Kalimpong. From Bhutan house, Raja Sonam Topgay Dorji ("Topgay Raja") held the post of Trade Agent to the Government of Bhtan, however he functioned to a large extent as prime minister, foreign minister, and ambassador to India. Through this position as a trade intermediary, the Dorji family amassed wealth reputedly greater than that of the royal family.[14] Topgay Raja himself married a Sikkimese princess.[14][15]

After two generations of growing influence, the sister of Prime Minister Jigme Dorji – the daughter of Topgay Raja – married the Third King, creating a new bond so prominent as to cause discontent among other Bhutanese families.[14][16] The public was divided between pro-modernist and pro-monarchist camps.[10]

In the early 1960s, the Third King fell ill and went to Switzerland for treatment. As the king was unavailable, Prime Minister Jigme Dorji sought to fill a leadership role, however this led to tensions with the military and monarchist factions.[13]:85 Namely, Dorji conflicted with the Royal Bhutan Army over the use of military vehicles, forced the retirement of some 50 military officers, and sought to limit the power of state-supported religious institutions such as the Dratshang Lhentshog and Je Khenpo.[10] On April 5, 1964, reformist Prime Minister Jigme Dorji was assassinated in Phuentsholing by monarchist cadres as the king lay ill in Switzerland. The Dorji family was subsequently put under close watch.[17]

The King's Tibetan mistress Yangki and her father, who had been implicated in the assassination, suspected that Jigme Dorji's son Lhendup would use the king's absence to exact revenge.[13]:36 They attempted to flee into India, but were detained at Gelephu. They eventually fled the country.[16] The King's own uncle and head of the Royal Bhutan Army, Namgyal Bahadur, was among those executed for their role in the attempted coup.[18]

The post of Prime Minister (Lonchen) was vacant, and the King identified Jigme Dorji's son Lhendup as the successor. Lhendup's mother, then head of the Dorji family, advised the King against giving any title to Lhendup because it would have made the situation more explosive. In 1964, however, the King announced his intention to appoint Lhendup as Lonchen. Lhendup fled to Nepal in 1965 due to political pressure, and was effectively exiled by the National Assembly.[13]:118 Today, remaining members of the Dorji family remain prominent in Bhutanese politics.[12]

The Third King died in 1972, and the Raven Crown passed to the 16-year-old Jigme Singye Wangchuck. The Fourth King was, like his father, educated in England and India, and had also attended Ugyen Wangchuck Academy in Paro. Reigning until 2008, the Fourth King was responsible for the development of the tourism industry, Gross National Happiness as a concept, and strides in democratization including the draft Constitution of Bhutan. The later years of his reign, however, also marked the departure of Bhutanese refugees in the 1990s amid the government's driglam namzha policy and citizenship laws that were overzealously enforced by some district officials. To the astonishment of the Bhutanese public, the Fourth King announced his abdication in 2005 and retired in 2008, handing the crown to his son Jigme Khesar Namgyel Wangchuck.[7]

Jigme Khesar Namgyel Wangchuck assumed the throne as the Fifth King in 2008 as the kingdom adopted its first democratic Constitution.

Below is an extended patrilineal genealogy of the House of Wangchuck through the present monarch.[19]