The Royal Bhutan Army (Dzongkha: བསྟན་སྲུང་དམག་སྡེ་; Wylie: bstan-srung dmag-sde),[1] or RBA, is a branch of the armed forces of the Kingdom of Bhutan responsible for maintaining the country's territorial integrity and sovereignty against security threats.[2] The King of Bhutan is the Supreme Commander in Chief of the RBA.[2] The Chief Operations Officer is Goonglon Wogma (Major General) Batoo Tshering.[3][4]

The RBA includes the Royal Body Guards (RBG), an elite branch of the armed forces responsible for the security of the King, the Royal Family, and other VIPs.[5][6]

It is customary, but not obligatory, for one son from each Bhutanese family to serve. In addition, militia may be recruited during emergencies. It may, from time to time, be called on to assist the Royal Bhutan Police (RBP) in maintaining law and order. 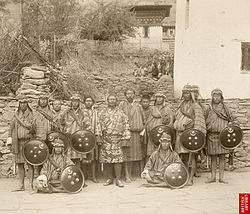 The RBA was formed in the 1950s in response to the Chinese take over and subsequent People's Liberation Army actions in Tibet with intense pressure by India. In 1958, the royal government introduced a conscription system and plans for a standing army of 2,500 soldiers.[6] The Indian government had also repeatedly urged and pressured Bhutan to end its neutrality or isolationist policy and accept Indian economic and military assistance. This was because India considered Bhutan its most vulnerable sector in its strategic defense system in regards to China.[7] When Bhutan accepted the Indian offer, the Indian Army became responsible for the training and equipping of the RBA. By 1968, the RBA consisted of 4,850 soldiers, with a recruiting goal of 600 additional soldiers a year. By 1990, the RBA was a force of 6,000 soldiers.[6]

Relationship with the Indian Armed Forces

Project DANTAK of the Border Roads Organisation, a sub-division of the Indian Army Corps of Engineers, has been operating in Bhutan since May 1961. Since then Project DANTAK has been responsible for the construction and maintenance of over 1,500 km of roads and bridges, Paro Airport and a disused airfield at Yangphula, heliports, and other infrastructure.[10] While these serve India's strategic defence needs, it is also an obvious economic benefit for the people of Bhutan.

The Royal Bhutan Army relies on Eastern Air Command of the Indian Air Force for air assistance. In recent years India has helped Bhutan start to develop its military in all areas through military donations and training.[11] Indian Air Force helicopters evacuated RBA casualties to India for treatment during Operation All Clear in 2003.[12]

During the early 90s, the Indian Separatist groups, United Liberation Front of Asom (ULFA), National Democratic Front of Bodoland (NDFB), and Kamtapur Liberation Organization (KLO) had begun to clandestinely set up camps in Bhutan's dense southern jungles. These camps were used to train cadres, store equipment, and launch attacks on targets in India.[13] The Bhutanese government became aware of their presence in 1996 and from 1997, the issue was regularly discussed in the National Assembly.[13][14] The Government of India began exerting diplomatic pressure on the Royal Government to remove the militant presence and offered conducting joint military operations against the militants. The Royal Government preferring a peaceful solution, declined the offer and instead initiated dialogue with the militant groups in 1998.[15] By December 2003, negotiations failed to produce any agreement and the Royal Government unable to tolerate their presence any longer issued a 48-hour ultimatum on 13 December. On 15 December the RBA commenced military operations against the militant groups.[13]

A combined RBA and RBG force of 6,000, operating out of 20 camps established during the six years of negotiations, attacked an estimated 3,000 militants spread across 30 militant camps.[16][17] By 27 December 2003, all 30 militant camps had been captured. Additionally, the RBA seized "more than 500 AK 47/56 assault rifles and 328 other assorted weapons including rocket launchers and mortars, along with more than 100,000 rounds of ammunition. An anti-aircraft gun was also found at the site of the GHQ of the ULFA."[18]

By 3 January 2004, all 30 militant camps (ULFA-14, NDFB-11, KLO-5) with an additional 35 observation posts, were destroyed and the militants dislodged.[19] A total of 485 ULFA, NDFB, and KLO militants were killed, while those captured along with seized weapons and ammunition were handed over to the Government of India. Captured non-combatants were handed over to Assamese civil authorities. The RBA suffered 11 soldiers KIA, and 35 WIA.[12]

As of 16 June 2007, the RBA stood at 9,021 active duty personnel. By 2008, this number is expected to be reduced to 8,000 active duty personnel. This is in line with an initiative introduced in 2005 by the Royal Government of Bhutan to reduce the strength of the RBA while increasing militia training of the Bhutanese population.[20]

The Army Welfare Project (AWP) is a commercial enterprise of the RBA set up in 1974 to provide benefits for retired RBA and RBG personnel in the form of employment, pensions, and loans.[6][21] The AWP manufactures alcoholic beverages in three distilleries located in Sarpang, Samdrup Jongkhar and Samtse.[21] As of 2001, the AWP was annually producing 8 million litres of alcoholic beverages of which 60 percent was consumed by the local market and the rest exported to India.[22] Its most popular brand is the Black Mountain Whisky.[21]

The RBA is a mobile infantry force lightly armed with weapons largely supplied by India.

In 1991, the following were the ranks within the Bhutanese Army:[24]