Founded on June 28, 1979, the park was originally named "Parque Nacional Huanchaca." Less than a decade later, in 1988, the park was renamed "Parque Nacional Noel Kempff Mercado" in honor of the late pioneering biologist and Bolivian conservationist Prof. Noel Kempff Mercado, both for his research and discoveries in the Park and in memory of his tragic death in the area; Mercado was murdered in the park by drug traffickers when he inadvertently stumbled across a secret cocaine laboratory high on the Huanchaca plateau. [1]

Noel Kempff Mercado National Park occupies 15,234 km² (5,880 mi²) in the northeastern corner of the Bolivian department of Santa Cruz de la Sierra. The Park is dominated by a large tableland of 7000 sq km, the Bolivian side of which is Serrania Huanchaca, and the Brazilian side is Sererania Ricardo Franco. The intervening Rio Verde marks the national boundary. The tableland is bounded by precipitous cliffs, 200 to 700 metres in height. The area was explored in 1908 by Col. Percy Harrison Fawcett on a frontier survey for the Bolivian government. In London, he showed photographs to Arthur Conan Doyle, which fired Doyle's imagination for him to write the novel The Lost World. One of the most biologically diverse areas in the world, Bolivia is known for its diversity in climate, fauna and flora. Weather in the general area is very hot and humid throughout the year, with abundant rainfall reaching roughly 1500 mm. The five driest months are May to September inclusive, during which rainfall is about 20 per cent of the annual figure.

The rocks of the tableland comprise Proterozoic sandstones, deposited around 1000 million years ago, intruded by a tholeiitic sill/dyke complex. These overlie an older basement of granites and metamorphic rocks which crop out over the Amazonic plain. The surface of the tableland is overlain by Cretaceous sandstones, and there are laterites and siliceous duricrusts which mark stages of Tertiary uplift and peneplanation[2]. 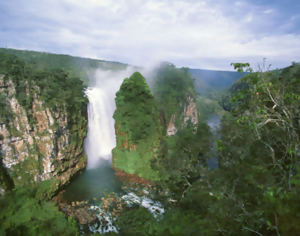 It is estimated that the park is home to approximately 4.000 species of vascular plants, including bromelias, passifloras, heliconias, aráceas and palm trees. There are also important woods like the "Mara" (mahogany). The area encompasses five important ecosystems ranging from Amazonian rain forest, gallery forest and semi-deciduous tropical forest to flooded savanna and dry cerrado.

The park is also home to more than 130 species of mammals (rare river otters, river dolphins, tapirs, spider and howler monkeys, the giant armadillo, giant anteaters and endangered jaguars, including a population of black jaguars), 620 species of birds (nine species of macaw, possibly the highest number of species in any one protected area), and more than 70 species of reptiles, including the black caiman (Melanosuchus niger).

In this area there are more than 617 species of birds — 20% of the all bird species in South America. Recent studies indicate that these numbers will increase once migratory birds are included.

In this park there exist nearly 74 species of reptiles including the black caiman, snakes, and other rare species. 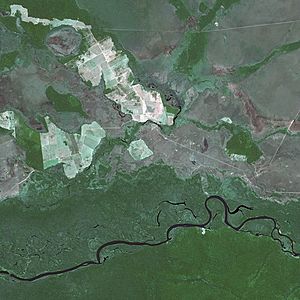 The park has 347 species of insect, among them the rarest in the world. They are unfortunately not studied yet.