Shimmer Women Athletes (stylized as SHIMMER Women Athletes and often referred to simply as SHIMMER) is an American, Chicago based female independent professional wrestling promotion which held its first event on November 6, 2005.[1][2] Established by Dave Prazak and run by both him and Allison Danger, the promotion was created with a mission to give North American as well as international female wrestling talent a serious platform on which to display their skills.[3] The company takes a unique approach when it comes to holding events: they run one large show an average of every three months at the Eagles Club in Berwyn, Illinois. Two DVDs worth of material are taped at these shows and are sold as single volumes initially through Ring of Honor's online store before being nationally distributed through retail outlets. Due to Prazak's work with Ring of Honor, the two companies are closely affiliated with ROH promoting the Shimmer product by semi-regularly featuring the women in competition on their pre as well as main show cards. In September 2008 the company announced that it would start its own wrestling school for female athletes.

Ring of Honor recognizes the Shimmer Championship as well as the Shimmer Tag Team Titles, and both are defended at ROH events.[4] Its former sister promotion Full Impact Pro also recognized the titles and had defenses of them at its events. Shimmer also has an agreement with Total Nonstop Action Wrestling (TNA) that allows TNA contracted talent to appear at Shimmer events.[5] 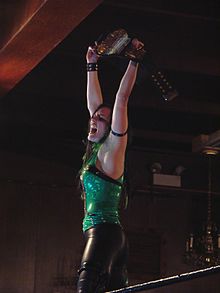