President of the Church

President of the Church

In the Latter Day Saint movement, the President of the Church is generally considered to be the highest office of the church. It was the office held by Joseph Smith, Jr., founder of the movement, and the office assumed by many of Smith's claimed successors, such as Brigham Young, Joseph Smith III, Sidney Rigdon, and James Strang. Several other titles have been associated with this office, including First Elder of the church, Presiding High Priest, President of the High Priesthood, Trustee-in-Trust for the church, Prophet, Seer, Revelator, Translator, and Ruler (in Israel). The movement's founder, Joseph Smith, Jr., the first president of the church, was known by all of these titles in his lifetime (although not necessarily with consistency). 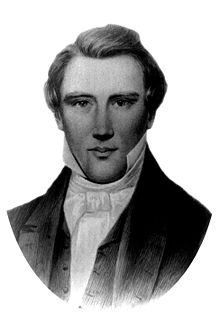 Joseph Smith, Jr., the founder of the Latter-day Saint movement

The concept that the Church of Christ would have a single presiding officer arose in late 1831. Initially, after the church's formation on April 6, 1830, Joseph Smith referred to himself as merely "an apostle of Jesus Christ, and elder of the church."[1] However, there was one other apostle—Oliver Cowdery—and several other elders of the church, making the formal hierarchy of the church unclear.

In September 1830, after Hiram Page claimed to have received revelations for the church, a revelation to Smith stated that "no one shall be appointed to receive commandments and revelations in this church excepting my servant Joseph Smith, Jun., for he receiveth them even as Moses."[2] Thus, Smith assumed the position as the only apostle or elder with the gift of revelation for the entire church.

In early June[3] 1831, Joseph Smith was ordained to the "high priesthood", along with twenty-two other men (including prominent figures in the Latter Day Saint movement such as Hyrum Smith, Parley P. Pratt, and Martin Harris).[4][5] As "high priests", these men were higher in the priesthood hierarchy than the elders of the church. However, it was still unclear whether Smith and Cowdery's calling as apostles gave them more authority than the other high priests.

In 1835, Smith revised the Articles and Covenants of the Church of Christ, changing the phrase "an ... elder of the church" to "the first elder of this Church."[9] Thus, subsequent to 1835, Smith was sometimes referred to as the First Elder of the church. The 1835 revision also added a verse referring to the office of "president of the high priesthood (or presiding elder)",[10] which had since been added to the church hierarchy.

President of The Church of Jesus Christ of Latter-day Saints

See also: List of presidents of The Church of Jesus Christ of Latter-day Saints 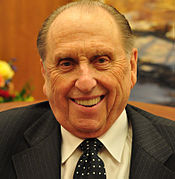 Thomas S. Monson, President of The Church of Jesus Christ of Latter-day Saints

Latter-day Saints consider the president of the church to be God's spokesman to the entire world. He is considered to be the highest priesthood authority on earth, with the exclusive right to receive revelations from God on behalf of the entire church or the entire world. Modern presidents, however, have not generally continued Joseph Smith's practice of publishing written doctrinal revelations and visions, although most have stated that they have received them.[citation needed]

According to the LDS Church's Doctrine and Covenants, the President of the Church is the only man empowered to receive revelation for the entire church and to clarify doctrine.[11] The Church teaches its members "we can always trust the living prophets" and that one's "greatest safety lies in strictly following the word of the Lord given through His prophets, particularly the current President of the Church."[12] In the Church, he is "authorized to counsel and dictate in the greatest and what might be deemed the most trifling matters, to instruct, direct and guide this Saints."[13] Members are taught to rely on the Holy Ghost to judge,[14] and if a revelation is in harmony with the revealed word of God, it should be accepted.[15]

Not everything the prophet says is considered to be doctrine. Joseph Smith, Jr. taught "a prophet is a prophet only when he was acting as such."[16] When he declares new doctrine, "he will declare it as revelation from God, and it will be so accepted by the Council of the Twelve and sustained by the body of the Church."[17] If the doctrine is not accepted by the Church as the word of God, members are not bound by the doctrine,[18] even if it comes from the President of the Church.[19]

Presidents of the Church have taught that God will never allow the President to lead the Latter-day Saints astray and that God will "remove" any man who stands at the head of the Church who intends to mislead its members.[20] This is not a statement of belief that they are "infallible",[21] but that their errors will not result in "the permanent injury of the work."[22] Bruce R. McConkie said:

With all their inspiration and greatness, prophets are yet mortal men with imperfections common to mankind in general. They have their opinions and prejudices and are left to work out their own problems without inspiration in many instances.[23]

Revelations from God . . . are not constant. We believe in continuing revelation, not continuous revelation. We are often left to work out problems without the dictation or specific direction of the Spirit."[24]

Thus the current prophet can clarify, correct or change any previous teachings.[25]

Counselors to the President

Succession to the presidency

Seniority in the Quorum of the Twelve Apostles

Seniority in the Quorum of the Twelve Apostles is important, as the senior apostle presides over the quorum and, historically, becomes the president of the church upon the current president's passing. Specific rules have applied to special situations that have come up over time.

In another instance, Ezra Taft Benson left active status in the quorum for a time when he was serving as the United States Secretary of Agriculture in the Eisenhower administration. In this case, however, Benson did not lose seniority in the quorum and he became the president of the church upon the passing of Spencer W. Kimball.

Though there has never been a popular movement in the church to have a President removed or punished, he could theoretically be removed from his position or otherwise disciplined by the Common Council of the Church.[39] The only president of the church brought before the Common Council was Joseph Smith, Jr., who was tried for charges made against him by Sylvester Smith after the return of Zion's Camp in 1834.[40] The Council determined that Joseph Smith had "acted in every respect in an honorable and proper manner with all monies and properties entrusted to his charge."[41]

President of the Community of Christ

See also: List of Prophet–Presidents of the Community of Christ

Succession to the Presidency

Generally, the Prophet–President will name or ordain a successor prior to his death. The office was traditionally referred to as President of the High Priesthood. Prior to 1995 these successors have been chosen consistent with lineal succession, even though it was not a church rule. Accordingly, the first six Prophet–Presidents following movement founder Joseph Smith, Jr. were his direct descendants.

In 1995, Wallace B. Smith broke with the precedent of lineal succession by naming W. Grant McMurray as his successor. In November 2004, McMurray resigned from the office of Prophet–President without naming a successor, citing medical and personal issues. The First Presidency, composed of McMurray's two counselors, continued to function as the church's chief executive council. A Joint Council of church leaders led by the Council of Twelve Apostles announced in March 2005 that Stephen M. Veazey would be Prophet–President designate. Veazey had been serving as president of the Council of Twelve. Delegates elected to a special World Conference of the church approved Veazey and he was ordained as the Prophet–President on June 3, 2005.

President of The Church of Jesus Christ (Bickertonite)

See also: List of presidents of The Church of Jesus Christ (Bickertonite)

Paul Palmieri, President of The Church of Jesus Christ (Bickertonite)

Similar to other denominations in the Latter-day Saint movement, in The Church of Jesus Christ (Bickertonite), the President of the General Church is also a member of the Quorum of Twelve Apostles.