Street in the Renaissance town center of Ferrara. 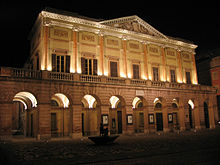 The Teatro Alessandro Bonci in Cesena.

The Music of Emilia-Romagna has the reputation of being one of the richest in Europe; there are six music conservatories alone in the region, and the sheer number of other musical venues and activities is astounding. The region, as the name implies, combines the traditions of two different, contiguous areas—Emilia and Romagna—and it is perhaps this blend that contributes to the wealth of musical culture.