Sardinia is probably the most culturally distinct of all the regions in Italy and, musically, is best known for the tenore polyphonic chant, sacred songs called gozos, and launeddas, an ancient instrument that consist in a set of three single-reed pipes, all three mouth-blown simultaneously using circular breathing, with two chanters and one drone. 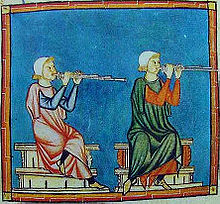 Launeddas in a Medieval painting

Launeddas is an ancient instrument, dating back to at least the 8th century BC, they are played using circular breathing. Launeddas are used to play a complex style of music that has achieved some international attention, and they are still played during religious ceremonies and dances (su ballu). Some of the most famous player were Efisio Melis, Antonio Lara, Dionigi Burranca and Luigi Lai. Many of the launeddas musicians are from de south of the island from villages like Villaputzu, San Vito and Muravera in the subregion named Sarrabus, or from Samatzai but even from Cabras near Oristano and Ovodda near Nuoro. Distinctively, they are played using extensive variations on a few melodic phrases and, because of the technique of circular breathing, a single song can last over an hour.

Traditional singing accompanied by guitar cantu a chiterra is also found in Sardinia, represented by performers like Luiginu Cossu, Maria Carta, and nowadays Franco Denanni; this genre is especially well known in the northwest region of Logudoro near the city of Sassari and in the northeast region of Gallura.

Rural polyphonic chanting known as cantu a tenore is sung with four vocal parts. They are bassu (bass), mesa boghe (middle), contra (counter) and boghe (leader and soloist). The most popular group is Tenores di Bitti, and others include Tenores de Oniferi. In November 2005 The A Tenore vocal style of the Sardinian pastoral culture was proclaimed a Masterpiece of the Oral and Intangible Heritage of Humanity by UNESCO.

Other traditional singing, dance and music

The modern Teatro Comunale of Cagliari is home to the permanent Choir and Orchestra of the Opera and Concert Association of Cagliari and seat of the Cagliari Opera Foundation. As well, there is a Roman amphitheater in Cagliari that is used for outdoor summer concerts and festivals. The city is the site of Palestrina music conservatory.

The town of Tadasuni is the site of one of the interesting Giovanni Dore museum, a collection of 400 traditional Sardinian folk instruments. The Ente Musicale di Nuoro was founded in 1987 and, among other activities, sponsors the annual Nuoro Jazz Festival directed by trumpeter Paolo Fresu. Sassari is the site of the Luigi Canepa music conservatory, the Teatro Politeama Verdi, built in 1884 and the Civic Theatre (1827).

S'hymnu sardu nationale was the anthem of the Savoyard Kingdom of Sardinia (later become Kingdom of Italy); it was written in Sardinian language by Vittorio Angius in 1842. It was substituted by the Marcia Reale (Royal March of Ordinance) in 1861.

Dimonios (Demons) is the official hymn of Sassari Mechanized Brigade, written in Logudorese Sardinian, in 1915.