The lateral geniculate nucleus (LGN) is the primary relay center for visual information received from the retina of the eye. The LGN is found inside the thalamus of the brain.

The LGN receives information directly from the ascending retinal ganglion cells via the optic tract and from the reticular activating system. Neurons of the LGN send their axons through the optic radiation, a pathway directly to the primary visual cortex. In addition, the LGN receives many strong feedback connections from the primary visual cortex. In mammals and humans the two strongest pathways linking the eye to the brain are those projecting to the LGNd (dorsal part of the LGN in the thalamus), and to the Superior Colliculus (SC)[1]

Both the left and right hemisphere of the brain have a lateral geniculate nucleus, named so for its resemblance to a bent knee (genu is Latin for "knee"). In many primates, including humans and macaques, it has layers of cell bodies with layers of neuropil in between, in an arrangement something like a club sandwich or layer cake, with cell bodies of LGN neurons as the "cake" and neuropil as the "icing". In humans and macaques the LGN is normally described as having six distinctive layers. The inner two layers, 1 and 2, are called the magnocellular layers, while the outer four layers, 3, 4, 5, and 6, are called parvocellular layers. An additional set of neurons, known as the koniocellular sublayers, are found ventral to each of the magnocellular and parvocellular layers.[2] It must be noted, this layering is variable between primate species, and extra leafleting is variable within species. 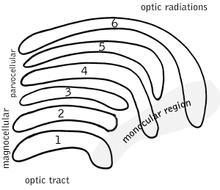 Schematic diagram of the primate LGN. Layers 1 and 2 are more ventrally located, and are next to the incoming optic tract fibers.

The magnocellular, parvocellular, and koniocellular layers of the LGN correspond with the similarly named types of ganglion cells.

Koniocellular cells are functionally and neurochemically distinct from M and P cells and provide a third channel to the visual cortex. They project their axons between the layers of the lateral geniculate nucleus where M and P cells project. Their role in visual perception is presently unclear; however, the koniocellular system has been linked with the integration of somatosensory system-proprioceptive information with visual perception, and it may also be involved in color perception.[citation needed]

The parvo- and magnocellular fibers were previously thought to dominate the Ungerleider-Mishkin ventral stream and dorsal stream, respectively. However, new evidence has accumulated showing that the two streams appear to feed on a more even mixture of different types of nerve fibers.[3]

The other major retino-cortical visual pathway is the retinotectal pathway, routing primarily through the superior colliculus and thalamic pulvinar nucleus onto posterior parietal cortex and visual area MT.

Another way of remembering this is 2+3=5, which is correct, so ipsilateral side, and 1+4 doesn't equal 6, so contralateral.

This description applies to the LGN of many primates, but not all. The sequence of layers receiving information from the ipsilateral and contralateral (opposite side of the head) eyes is different in the tarsier.[5] Some neuroscientists suggested that "this apparent difference distinguishes tarsiers from all other primates, reinforcing the view that they arose in an early, independent line of primate evolution".[6]

In the LGN, the corresponding information from the right and left eyes is "stacked" so that a toothpick driven through the club sandwich of layers 1 through 6 would hit the same point in visual space six different times.

The LGN receives input from many sources, including the cortex and then sends its output to the cortex.

At least in some species, the LGN also receives some inputs from the optic tectum (also known as the superior colliculus).[7]

Information leaving the LGN travels out on the optic radiations, which form part of the retrolenticular limb of the internal capsule.

Studies involving blindsight have suggested that projections from the LGN not only travel to the primary visual cortex but also to higher cortical areas V2 and V3. Patients with blindsight are phenomenally blind in certain areas of the visual field corresponding to a contralateral lesion in primary visual cortex; however, these patients are able to perform certain motor tasks accurately in their blind field, such as grasping. This suggests that neurons travel from the LGN to both the visual cortex and higher cortex regions.[8]

Like other areas of the thalamus, particularly other relay nuclei, the LGN likely helps the visual system focus its attention on the most important information. That is, if you hear a sound slightly to your left, the auditory system likely "tells" the visual system, through the LGN, to direct visual attention to that part of space.

The LGN is also a station that refines certain receptive fields.

Recent experiments using fMRI in humans have found that both spatial attention and saccadic eye movements can modulate activity in the LGN.