Mount Robson Provincial Park is a large provincial park in the Canadian Rockies with an area of 2,249 km². The park is located entirely within British Columbia, bordering Jasper National Park in Alberta. The B.C. legislature created the park in 1913, the same year as the first ascent of Mount Robson by a party led by Conrad Kain. The park is named for Mount Robson, which has the highest point in the Canadian Rockies and is located entirely within the park. 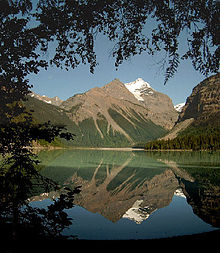 Reflections of mountains in Kinney Lake 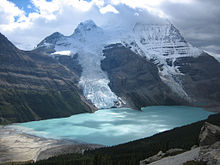 Mt. Robson & one of its glaciers calving into Berg Lake

The first recreational trail was built in 1913 by Jasper outfitter Donald "Curly" Phillips along the Robson River to Berg Lake.

From May to September, a visitor centre is open just south of the Mt. Robson Viewpoint on the Yellowhead Highway. The only services within the park are at a combination coffee-shop gas station complex at the Viewpoint.

To reach the park, follow the Yellowhead Highway 390 kilometres west of Edmonton or 290 kilometres east of Prince George.

Mount Robson Park was declared a UNESCO World Heritage Site in 1984, together with the other national and provincial parks that form the Canadian Rocky Mountain Parks, for the mountain landscapes containing mountain peaks, glaciers, lakes, waterfalls, canyons and limestone caves as well as fossils found here.