City Road is a disused London Underground station in Islington. It was one of the stations built when the City & South London Railway (C&SLR) (now part of the Northern line) opened its extension from Moorgate to Angel on 17 November 1901. It is located between Old Street and Angel.

From the start, City Road station was little used, and discussions of its closure took place as early as 1908.[1] However, the station remained open until 8 August 1922 when the C&SLR's northern section between Euston and Moorgate was closed to enable the diameter of the tunnels to be increased from 3.2 m (10 ft 6 in) to the Underground's standard diameter of 3.56 m (11 ft 8¼ in), so that larger and longer Standard Stock trains could be operated.

The low number of passengers using the station meant that the extension of the platform tunnels could not be justified on financial grounds, and the station remained closed when the line was reopened in 1924. The platforms were removed and the lift shaft was converted for use as a ventilation shaft. City Road was the only twin tunnel station of the C&SLR not to be reconstructed. During World War II, the station was converted for use as an air-raid shelter.[1] 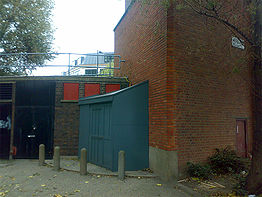 The rear entrance to the remains of City Road tube station.

The station building remained until the 1960s, when all but the structure immediately around the original lift shaft was demolished.[1] Today little remains to indicate the site of the former station. At track level the short station tunnels remain visible from trains passing through.