Mill Hill (The Hale) railway station was a station in Mill Hill, London NW7 on the now-removed railway between Mill Hill East station and Edgware railway station. It was located near the junction of Bunns Lane and Lyndhurst Avenue.

The railway line was built by the Edgware, Highgate and London Railway and was opened on 22 August 1867 by the Great Northern Railway (GNR) (which had taken over the EH&LR) in what was then rural Middlesex. The station, then named The Hale Halt, was not opened until 1906, on the single track from Finchley Central to Edgware.[1] The whole line ran from Finsbury Park to Edgware via Highgate with branches to Alexandra Palace and High Barnet.

After the 1921 Railways Act created the Big Four railway companies, the line was, from 1923, part of the London & North Eastern Railway (LNER). The station was named Mill Hill (The Hale) in 1928.

In 1935 London Underground devised a "New Works Programme" of improvements, and planned to take over the line from the LNER in its "Northern Heights" plan. The line was to be modernised for use by electric trains on double track, and amalgamated with the Northern Line. 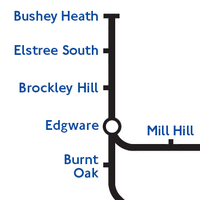 Works began in the late 1930s and were at an advanced stage when they were interrupted by the Second World War. The section of line between Finchley Central station and Edgware was closed to passenger services on 10 September 1939. On the Edgware branch of the line, only the works on the section from Finchley Central to Mill Hill East were completed, to allow access to and from the nearby army barracks. That section reopened with Underground services in 1941 as a one-station spur.

After the war a shortage of funds led to the cancellation of the Northern Heights work in the early 1950s. Mill Hill (The Hale) was the only station between Edgware and Mill Hill East and, as Edgware was already served by the Underground from its own station in the town and Mill Hill was served by the nearby London Midland and Scottish Railway (LMS) Mill Hill Broadway station, there was little need for the completion of the track modernisation works and the reopening of the line for passenger services. The line continued to be used for goods until 29 February 1964 when it was completely closed.[2] 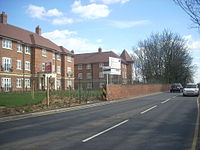 Left:Flats built over the station site, Right: The Bridge

Until the early 1970s it was possible to buy an Underground ticket to "Mill Hill The Hale" even though no such station had existed for years. This enabled passengers to keep their tickets upon alighting at Mill Hill East and to travel onward by 240A bus anywhere between Mill Hill and Edgware.

Today the track has been removed and the platforms and station buildings have been demolished. The site of Mill Hill (The Hale) station was covered by material excavated for the construction of slip roads to the nearby section of the M1 motorway.

In 2007 work began to build flats on the site of the former station, but the bridge over the former tracks remains.