The Kegworth Air Disaster occurred on 8 January 1989, when British Midland Flight 92, a Boeing 737–400, crashed onto the embankment of the M1 motorway near Kegworth, Leicestershire, in England. The aircraft was attempting to conduct an emergency landing at East Midlands Airport. Of the 126 people aboard, 47 died and 74, including seven members of the flight crew, sustained serious injuries.

The aircraft was a British Midland 737-400, aircraft registration G-OBME, on a scheduled flight from London Heathrow Airport to Belfast, Northern Ireland, having already flown from Heathrow to Belfast and back that day. After taking off from Heathrow at 7:52 pm, Flight 092 was climbing through 28,300 feet to reach its cruising altitude of 35,000 feet when a blade detached from the fan of the port engine. While the pilots did not know the source of the problem, a pounding noise was suddenly heard, accompanied by severe vibrations. In addition, smoke poured into the cabin through the ventilation system and a smell of burning entered the plane. Several passengers sitting near the rear of the plane noticed smoke and sparks coming from the left engine.

The flight was diverted to nearby East Midlands Airport at the suggestion of British Midland Airways Operations.

After the initial blade fracture, Captain Kevin Hunt had disengaged the plane's autopilot. When Hunt asked First Officer David McClelland which engine was malfunctioning, McClelland replied: 'It's the left one. No, the right one'. In previous versions of the 737, the left air conditioning pack, fed with compressor bleed air from the left (number 1) engine, supplied air to the flight deck, while the right air conditioning pack, fed from the right (number 2) engine supplied air to the cabin. On the 737-400 this division of air is blurred; the left pack feeds the flight deck but also feeds the aft cabin zone, while the right feeds the forward cabin. The pilots had been used to the older version of the aircraft and did not realise that this aircraft (which had only been flown by British Midland for 520 hours over a two-month period) was different. The smoke in the cabin led them to assume the fault was in the right engine; this led them to shut down the working right engine instead of the malfunctioning left engine. They had no way of visually checking the engines from the cockpit, and the cabin crew did not inform them that smoke and flames had been seen from the left engine.

When the pilots shut down the right engine, they could no longer smell the smoke, which led them to believe that they had correctly dealt with the problem. As it turned out, this was simply a coincidence: when the autothrottle was disengaged to shut down the right engine, the fuel flow to the left engine was reduced, and the excess fuel which had been igniting in the jet exhaust disappeared; therefore, the ongoing damage was reduced, the smoke smell ceased, and the vibration reduced, although it would still have been visible on cockpit instruments. The pilots, however, did not consult the vibration detectors because these instruments, on previous planes they had flown, were notoriously unreliable.

During the final approach to the East Midlands Airport, more fuel was pumped into the damaged engine to maintain speed, which caused it to cease operating entirely and burst into flames. The flight crew attempted to restart the right engine by windmilling, using the air flowing through the engine to rotate the turbine blades and start the engine, but the aircraft was by now flying only at 185 km/h, too slow for this. Just before crossing the M1 motorway, the tail slammed onto the ground and the aircraft bounced back into the air and over the motorway, knocking down trees and a lamp-post before crashing on the opposite embankment and breaking into three sections approximately 475m (1/4 mile) short from the active runway's paved surface and approximately 630m (1/3 mile) from its threshold.

Of the 118 passengers on board, thirty-nine were killed in the crash and eight died later, for a total of forty-seven fatalities. All eight members of the flight crew survived the accident. Of the 79 survivors, 74 suffered serious injuries and five suffered minor injuries. No-one on the motorway was injured, and all vehicles in the vicinity of the disaster were undamaged. The first person to arrive at the scene to render aid was a motorist who subsequently received damages for post-traumatic stress disorder.[1] Four members of the British Army serving in Northern Ireland were among those killed in the crash.[2]

Shutting down the wrong engine

The Captain, Kevin Hunt, believed the right engine was malfunctioning due to the smell of smoke in the cabin because in previous Boeing 737 variants bleed air for cabin air conditioning was taken from the right engine. However, starting with the Boeing 737–400 variant, Boeing redesigned the system to use bleed air from both engines. Several cabin staff and passengers noticed that the left engine had a stream of unburnt fuel igniting in the jet exhaust, but this information was not passed to the pilots because cabin staff assumed the pilots were aware that the left engine was malfunctioning.

After disabling the autothrottle, the left engine flames stopped as they weren't being pumped fuel.

It was a coincidence that the smell of smoke disappeared when the autothrottle was disengaged and the right engine shut down. In the event of a malfunction pilots are trained to check all meters and review all decisions, and Captain Kevin Hunt proceeded to do so. Whilst he was conducting the review, he was interrupted by a transmission from East Midlands Airport informing him he could descend further to 12,000 feet (3,700 m) in preparation for the diverted landing. He did not resume the review after the transmission ended, and instead commenced descent. The vibration indicators were smaller than on the previous versions of the 737 in which the pilots had the majority of their experience.

The dial on the two vibration gauges (one for each engine) were no bigger than a 50 pence piece and the LED needle went around the outside of the dial as opposed to the inside of the dial as in the previous 737 series aircraft. The pilots had received no simulator training on the new model as no simulator for the 737-400 existed in the UK at that time. At the time vibration indicators were known for being unreliable (and in fact normally ignored by pilots) but unknown to the pilots this was one of the first aircraft at the time to have a very accurate vibration readout.

Analysis of the engine from the crash determined that the fan blades (LP Stage 1 compressor) of the uprated CFM56 engine used on the 737-400 were subject to abnormal amounts of vibration when operating at high power settings above 25,000 feet (7,600 m). As it was an upgrade to an existing engine, in-flight testing was not mandatory, and the engine had only been tested in the laboratory. Upon this discovery all 99 Boeing 737-400s (since G-OBME had crashed) were grounded and the engines modified. Following the crash, it is now mandatory to test all newly designed and significantly redesigned turbofan engines under representative flight conditions.

This unnoticed vibration created excessive metal fatigue in the fan blades, and on G-OBME this caused one of the fan blades to break off. This damaged the engine terminally and also upset its delicate balance, causing a reduction in power and an increase in vibration. The autothrottle attempted to compensate for this by increasing the fuel flow to the engine, however the damaged engine was unable to burn all the additional fuel, with much of it igniting in the exhaust flow, creating a large trail of flame behind the engine. 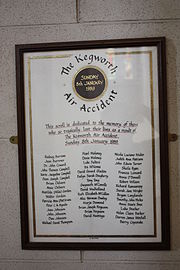 The official report into the disaster made 31 safety recommendations.

Evaluation of the injuries sustained led to considerable improvements in aircraft safety and emergency instructions for passengers. These were derived from a research programme funded by the CAA and carried out by teams from the University of Nottingham and Hawtal Whiting Structures (a consultancy company). The study between medical staff and engineers used analytical "occupant kinematics" techniques to assess the effectiveness of the brace position. A new notice to operators revising the brace position was issued in October 1993.

There is a memorial to "those who died, those who were injured and those who took part in the rescue operation", in the village cemetery in nearby Kegworth, together with a garden made using soil from the crash site.

Captain Hunt and First Officer McClelland were seriously injured in the crash, and were later dismissed following the criticisms of their actions in the AAIB report.[3]

British Midland Flight 092 was featured in an episode of Seconds From Disaster, called "Motorway Plane Crash".

It was also featured in the 2011 Discovery Channel documentary 'Aircrash Confidential'.[4]