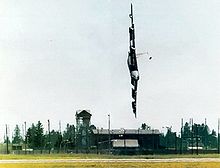 1994 Fairchild Air Force Base B-52 crash, caused by flying the aircraft beyond its operational limits. This history is now used in military and civilian aviation environments as a case study in teaching crew resource management

Pilot error (sometimes called cockpit error) is a term used to describe the cause of an accident involving an airworthy aircraft where the pilot is considered to be principally or partially responsible. Pilot error can be defined as a mistake, oversight, lapse in judgement, or failure to exercise due diligence by an aircraft operator during the performance of his/her duties.

Usually in an accident deemed due to "pilot error", the pilot in command (Captain) made the error unintentionally. However, an intentional disregard for a standard operating procedure (or warning) is still considered pilot error, even if the pilot's actions justified criminal charges.

The pilot may be declared to be in error even during adverse weather conditions if the investigating body deems that the pilot did not exercise due diligence. The responsibility for the accident in such a case would depend upon whether the pilot could reasonably know of the danger and whether he or she took reasonable steps to avoid the weather problem. Flying into a hurricane (for other than legitimate research purposes) would be considered pilot error; flying into a microburst would not be considered pilot error if it was not detectable by the pilot, or in the time before this hazard was understood. Some weather phenomena (such as clear-air turbulence or mountain waves) are difficult to avoid, especially if the aircraft involved is the first aircraft to encounter the phenomenon in a certain area at a certain time.

One of the most famous incidents of an aircraft disaster attributed to pilot error was the night time crash of Eastern Air Lines Flight 401 near Miami, Florida on December 29, 1972. The pilot, co-pilot, and Flight Engineer had become fixated on a faulty landing gear light and had failed to realize that the autopilot buttons had been bumped by one of the crew altering the settings from level flight to a slow descent. Told by ATC to hold over a sparsely populated area away from the airport (with, as a result, very few lights on the ground visible to act as an external reference) while they dealt with the problem, the distracted flight crew did not notice the plane losing height and the aircraft eventually struck the ground in the Everglades, killing 101 out of 176 passengers and crew.

The subsequent National Transportation Safety Board (NTSB) report on the incident blamed the flight crew for failing to monitor the aircraft's instruments properly. Details of the incident are now frequently used as a case study in training exercises by aircrews and air traffic controllers.

Placing pilot error as a cause of an aviation accident is often controversial. For example, the NTSB ruled that the crash of American Airlines Flight 587 was due to the failure of the rudder which was caused by "unnecessary and excessive rudder pedal inputs" on the part of the co-pilot who was operating the aircraft at the time. Attorneys for the co-pilot, who was killed in the crash, argue that American Airlines' pilots had never been properly trained concerning extreme rudder inputs. The attorneys also claimed that the rudder failure was actually caused by a flaw in the design of the Airbus A300 aircraft and that the co-pilot's rudder inputs should not have caused the catastrophic rudder failure that led to the accident that killed 265 people.