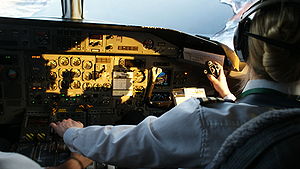 Control of the aircraft is normally shared equally between the first officer and the captain, with one pilot normally designated the "Pilot Flying" (PF) and the other the "Pilot Not Flying" (PNF), or "Pilot Monitoring" (PM), for each flight. Even when the first officer is the flying pilot, however, the captain remains ultimately responsible for the aircraft, its passengers, and the crew. In typical day-to-day operations, the essential job tasks remain fairly equal.

Many airlines promote by seniority only within their own company, the first officer may at times have more flight experience than the captain, by virtue of having experience from other airlines or the military. Traditionally, the first officer sits on the right-hand side of a fixed-wing aircraft and the left-hand side of a helicopter (the reason for this difference is related to the fact that in many cases the pilot flying is unable to release his right side from the cyclic control to operate the instruments, thus he sits on the right hand and does that with his left hand).

In the rank of Senior First Officer the pilot will also sit in the right hand seat. Often the Senior First Officer position is used within airlines to mean someone who has passed all the requirements for Captain, but there are no Captains positions within the company as yet, and therefore they are "on hold" until a position as captain becomes available when they will receive their Command Line Check.