Bracing or crash position is an instruction that can be given to prepare for a crash, such as on an aircraft, the instruction to brace for impact is often given if the aircraft must make an emergency landing over land or water. 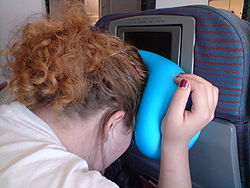 A demonstration of the brace position

There are many different ways to adopt the brace position, with many countries adopting their own version based on research performed by their own aviation authority or that of other countries. There is commonality among all brace positions despite these variations. For a forward seated passenger wearing only a lap belt, common recommendations for the brace position include:

In the United Kingdom, following the Kegworth air disaster in 1989, the UK Civil Aviation Authority contracted an engineering consultancy, Hawtal Whiting Structures, to perform computer based analytical investigation to optimise the brace for impact position for forward-facing passengers. This was supported by medical information from the University of Nottingham and testing at the Institute of Aviation Medicine.

The brace position as set out to airlines in the UK for passengers in forward-facing seats is based on extensive analytical work arising from Kegworth. It is subtly different from that in the United States and some other countries. Passengers should place their feet and knees together with their feet firmly on the floor (either flat or on the balls of their feet) and tucked behind the knees to prevent shins and legs being broken against the base of the seat in front. They should bend as far forward as possible, resting their head against the seat in front if it is within reach and place their hands on the back of their head, with the hands one on top of another (rather than interlocked). Their elbows should then be brought in. This prevents both flailing of the arms in the crash sequence and protects the head from flying debris. The head should be as far below the top of the seats as possible to prevent injury from any collapsing overhead compartments.

The brace procedure for the forward-facing seat in the United States is similar to that of the UK, but rather than placing the hands on the back of the head, passengers are advised to place them on the top of the seat in front, one hand holding the other wrist and resting the head in the space between the arms. If the seat in front is not within reach then passengers are advised to either grab their ankles or place their hands under their legs and grab the opposite forearm.

Most experts will say that maximum protection for a forward-facing seat is when the passenger is able to pre-position their head on the surface they are likely to impact (e.g., seat back or bulkhead), as the risk of head trauma is significantly reduced during the crash. Reducing head trauma may also help the passenger stay conscious, which is also essential for rapid evacuation after the crash.

In rear-facing seats, the attendant should be sitting with their back and head firmly against the back of the jumpseat, their knees and feet together and slightly in front of or behind the knee (depending on the individual airlines procedures) - commonly referred to as "toes to tail". In European carriers, the hands can be placed behind the head and hands one on top of the other and the elbows brought in to meet, taking care that the forearm does not cover the ear and restrict hearing. This position provides the flight attendant protection to the face from any flying debris (as it will impact their elbows) yet still provides them with the ability to view the cabin and not muffle their commands. In the United States, the Federal Aviation Administration (FAA) does not recommend placing the hands behind the neck as their research suggests such actions can cause unnecessary loading on the neck and spine during an impact.[1] Instead, US flight attendants are typically taught to sit on their hands, palms facing the ceiling, underneath their upper legs. Other variations include clasping the hands on the knees or using one arm to "hug" the opposing arm.

For forward-facing jumpseats, the position is exactly the same but with the feet behind the knees, with some airlines requiring flight attendants to tuck their chin in to their chest ("bow to the captain") to reduce the likelihood of whiplash injuries.

There is also a third brace position for flight attendants, and that is the "normal" brace position. This is adopted by the attendant for every take off and landing and provides them with protection from any sudden emergencies and allows them to adopt the full brace position quickly should they need to. The only difference between the normal brace and the full brace position is that the attendants will either fold their arms across their stomach or immobilize them by placing their hands under their thighs with the palms up. This position forms part of every flight attendant's "sixty second review" - a technique being adopted by airlines whereby the attendant will go over various factors in their head during the take-off and landing sequence. Things such as "how do I open my door?", "where is the next nearest exit?", "am I over land or water?" and "what commands will I shout" are just a few of the questions an attendant will ask themselves. The belief is that this mental review focuses the attendant on the safety-critical role they have during take-off and landing and will result in faster decision making and adaptation to the scenario.

Newer brace positions are being adopted by many U.S. airlines in which the flight attendants do not sit on their hands. Instead, they place their hands flat on top of their thighs. This new position is being adopted because in the event of a crash, sitting on hands can cause injury and/or crushing.

If carrying an infant on a lap, it is generally recommended that above positions should be adopted as best as possible, cradling the child with one arm and using this to also protect the child's head. In the UK, lap children are instructed to wear an infant safety belt which is a separate seat belt with a loop that connects to the parent's belt; however, in the United States such belts are not permitted by FAA regulations. The FAA believes that such baby belts significantly increases the risk of injury to the child.[2][3] In the early era of commercial aviation, the recommended brace position for children was on the floor against a bulkhead; this has since been amended due to the position's lack of protection. The safest position for an infant is in an aviation certified child safety seat.

There have been myths surrounding the use of the brace procedure [4] namely that adopting the brace procedure is only useful for preserving dental integrity for identification after a crash. Another myth is that the position is designed to increase the chance of death to reduce insurance-paid medical cost. Instances where the brace procedure has been adopted have been shown to save lives. In one accident, passengers were asleep on an aircraft that was about to collide with trees. One passenger awoke and adopted the procedure, and he was the only survivor.[5] All passengers aboard Scandinavian Airlines Flight 751, which crashed, survived: an outcome which it has been suggested was largely thanks to the passengers' universal adoption of the brace position.[6]

During the "Miracle on the Hudson" flight on January 15, 2009, there were fewer than three minutes to land U.S. Airways Flight 1549 into the Hudson River[7] and the only words the passengers heard from the pilot were "Brace for Impact". Flight attendants chanted, "Brace! Brace! Heads down! Stay down!" [8] and all 155 people on board survived with no life-threatening injuries. Several books were written about this rare feat of successful water landing[9] by a commercial aircraft, including a book titled Brace for Impact written by crash survivors that was released on the first anniversary of the crash.[10]

Many government aviation administrations or regulatory bodies mandate the depiction of how to adopt the brace position on aircraft safety cards and in-flight safety demonstrations, such as a 1993 ruling by the United Kingdom Civil Aviation Authority (issued in a Notice to Air Operator Certificate Holders 1993)[11] or, for example, in CAO 020.11 (section 14.1.3),[12] issued by the Civil Aviation Safety Authority of Australia.

The depiction of how to adopt the brace position is not a basic standard set forth by the International Civil Aviation Organization. While many regulatory bodies have adopted this addition on their own (as noted above), the FAA has not required it on flights to, from, or within the United States.

In an unexpected emergency on a passenger aircraft where an impact may be possible, cabin crew are trained to recognize such situations (e.g., flight attendants sense that the take-off is not going as usual) and shout commands to passengers, such as "Bend over! Stay down!", "Brace for impact! Heads down! Stay down!" or "Brace! Brace! Heads down! Grab your ankles!". In a developing emergency, the cabin crew can first give a briefing to passengers on how to properly adopt the brace position. Before the emergency landing, the flight deck usually gives a pre-arranged signal (such as the command, "Brace for impact." over the public announcement system or flashing the fasten seat-belt sign several times), whereupon the cabin crew will shout commands to passengers to adopt the brace position, such as "Brace, Brace! Stay down!" or "Get your heads down, stay down!", Which the cabin crew is required to chant repeatedly in a loud voice until the aircraft comes to a complete stop or they receive an "evacuate" command. Every airline has their own command when commanding passengers to take the brace position.

In the 1989 Boeing 737-400 Kegworth air disaster crash, the pilot was able to announce "Prepare for crash landing" 10 seconds before impact; the resulting injuries—from both those who did and did not adopt the brace position—would later be studied to provide further research on this topic. A CAA-funded engineering–medical joint research team was established, led by Nigel Rock of Hawtal Whiting (HW) Engineering Consultants and Prof Angus Wallace of the Nottingham University Hospital. The team was aided by Wg Cdr David Anton of the Royal Air Force Institute of Aviation Medicine. The work used mathematical modelling derived from the automobile industry to analyse the human body under crash conditions. (See "Further reading" below.)