The wrasses are a family, Labridae, of marine fish, many of which are brightly colored. The family is large and diverse, with over 600 species in 82 genera, which are divided into nine subgroups or tribes.[1] They are typically small fish, most of them less than 20 centimetres (7.9 in) long, although the largest, the Humphead wrasse, can measure up to 2.5 metres (8.2 ft). They are efficient carnivores, feeding on a wide range of small invertebrates. Many smaller wrasses follow the feeding trails of larger fish, picking up invertebrates disturbed by their passing.[2]

The word "wrasse" comes via Cornish from the Welsh word gwrach meaning an old woman or hag.[3]

Wrasses inhabit the Atlantic, Indian, and Pacific Oceans, usually in shallow water habitats such as coral reefs and rocky shores where they live close to the substrate.

Wrasses have protractile mouths, usually with separate jaw teeth that jut outwards.[4] Many species can be readily recognized by their thick lips, the inside of which is sometimes curiously folded, a peculiarity which gave rise the German name of "lip-fishes" (Lippfische.)[5] The dorsal fin has 8–21 spines and 6–21 soft rays, usually running most of the length of the back. Wrasse are sexually dimorphic. Many species are capable of changing sex. Juveniles are a mix of males and females (known as Initial Phase or IP individuals) but the largest adults become territory-holding (Terminal Phase or TP) males.[4]

The wrasses have become a primary study species in fish-feeding biomechanics due to their jaw structure. The nasal and mandibular bones are connected at their posterior ends to the rigid neurocranium, and the superior and inferior articulations of the maxilla are joined to the anterior tips of these two bones, respectively, creating a loop of 4 rigid bones connected by moving joints. This "four-bar linkage" has the property of allowing numerous arrangements to achieve a given mechanical result (fast jaw protrusion or a forceful bite), thus decoupling morphology from function. The actual morphology of wrasses reflects this, with many lineages displaying different jaw morphology that results in the same functional output in a similar or identical ecological niche.[4] 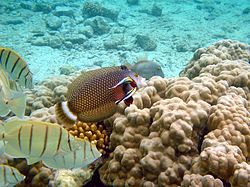 Some wrasses are the known as Cleaner wrasse, the best-known of the cleaner fish. They are symbiotic, or more specifically, mutualistic fish, performing grooming functions for other species of fish, and benefiting themselves by feeding on what they remove. In this behaviour they are reminiscent of the Egyptian plover, which is said to remove parasites from crocodiles.

The "client" fishes will congregate at wrasse cleaning stations and wait for wrasses to swim into their open mouths and gill cavities to remove gnathiid parasites.

Cleaner wrasses are best known for feeding on dead tissue and scales and ectoparasites, although they are also known to 'cheat', consuming healthy tissue and mucus, which is energetically costly for the client fish to produce. The bluestreak cleaner wrasse, Labroides dimidiatus is one of the commonest cleaners found on tropical reefs. Few cleaner wrasses have been observed being eaten by predators, possibly because parasite removal is more important for predator survival than the short-term gain of eating the cleaner.[11]

Other wrasse species, rather than inhabiting fixed locations, make "house calls" — that is, their "clientele" are too territorial or shy to go to a cleaning station.

Humans eat wrasse in many places. In the western Atlantic, the most common food species is the tautog.[5][dubious – discuss]

Wrasse are common in both public and home aquaria. Some species are small enough to be considered reef safe.

Wrasse may be employed as cleaner fish to combat sea-lice infestation in salmon farms.[12]