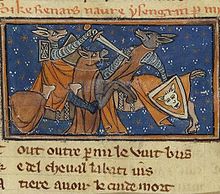 Illumination from a manuscript of the Roman de Renart, end of the 13th century

This article is about the anthropomorphic red fox. For the car manufacturer, see Reynard Motorsport. For the ships of the Royal Navy, see HMS Reynard.

Etymology of the name

Theories about the origin of the name Reynard are:

The traditional French word for "fox" was goupil from Latin vulpecula. However, mentioning the fox was considered bad luck among farmers. Because of the popularity of the Reynard stories, renard was often used as a euphemism, so that today renard is the standard French word for "fox" and goupil is now dialectal or archaic.

In medieval European folklore and literature 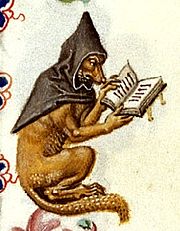 The figure of Reynard is thought to have originated in Alsace-Lorraine folklore from where it spread to France, the Low Countries, and Germany.[1] An extensive treatment of the character is the Old French Le Roman de Renart written by Pierre de Saint-Cloud around 1170, which sets the typical setting. Reynard has been summoned to the court of king Noble, or Leo, the Lion, to answer charges brought against him by Isengrim the Wolf. Other anthropomorphic animals, including Bruin the Bear, Baldwin the Ass, Tibert (Tybalt) the Cat, all attempt one stratagem or another. The stories typically involve satire whose usual butts are the aristocracy and the clergy, making Reynard a peasant-hero character.[1] The story of the preaching fox found in the Reynard literature was used in church art by the Catholic Church as propaganda against the Lollards.[2] Reynard's principal castle, Maupertuis, is available to him whenever he needs to hide away from his enemies. Some of the tales feature Reynard's funeral, where his enemies gather to deliver maudlin elegies full of insincere piety, and which feature Reynard's posthumous revenge. Reynard's wife Hermeline appears in the stories, but plays little active role, although in some versions she remarries when Reynard is thought dead, thereby becoming one of the people he plans revenge upon. Isengrim (Alternate French spelling : Ysengrin) is Reynard's most frequent antagonist and foil, and generally ends up outwitted, though he occasionally gets revenge.

Reynard appears first in the medieval Latin poem Ysengrimus, a long Latin mock-epic written ca. 1148-1153 by the poet Nivardus in Ghent, that collects a great store of Reynard's adventures. He also puts in an early appearance in a number of Latin sequences by the preacher Odo of Cheriton. Both of these early sources seem to draw on a pre-existing store of popular culture featuring the character. In 1174, the first branch or chapter of the Roman de Renart appears, written by Pierre de St. Cloud (though in all French editions it is designated as Branch II). Pierre wrote a sequel in 1179 (called Branch I) but between that date and after many French authors composed their own adventures for Renart li goupil (the fox). There is also the text Reinhard Fuchs by Heinrich der Glïchezäre.

Pierre de St. Cloud opens his work on the fox by situating it within the larger tradition of epic poetry, the fabliaux and Arthurian romance:

A 13th-century Middle Dutch version of the story (Van den vos Reynaerde, About Reynard the Fox), is also made up of rhymed verses (the same AA BB scheme). Like Pierre, very little is known of the author, Willem, other than the description by the copyist in the first sentences:

"Madoc" is probably another one of Willem's works, but is lost. 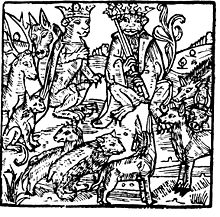 Geoffrey Chaucer used Reynard material in the Canterbury Tales; in "The Nun's Priest's Tale", Reynard appears as "Rossel" and an ass as "Brunel". In 1481 William Caxton printed The Historie of Reynart the Foxe, which was translated from a Middle Dutch version of the fables.[1] Also in the 1480s, the Scottish poet Robert Henryson devised a highly sophisticated development of Reynardian material as part of his Morall Fabillis in the sections known as The Talking of the Tod. Hans van Ghetelen, a printer of Incunabula in Lübeck printed an early German version called Reinke de Vos in 1498. It was translated to Latin and other languages, which made the tale popular across Europe. Reynard is also referenced in the Middle English poem Sir Gawain and the Green Knight during the third hunt.

Rénert the Fox was published in 1872 by Michel Rodange, a Luxembourgish author. An epic satirical work, an adaptation of the traditional Dutch fox epic to a setting in Luxembourg, it is known for its insightful analysis of the unique characteristics of the people of Luxembourg, using regional and sub-regional dialects to depict the fox and his companions. 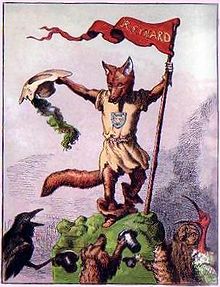 Van den vos Reynaerde, (About Reynard the Fox) was an anti-semitic children's story, written by the Dutch-Belgian Robert van Genechten, and named after the mediaeval Dutch poem. It was first published in 1937 in Nieuw-Nederland, a monthly of the Dutch national socialist movement NSB. In 1941 it was published as a book.

The story features rhinoceroses, neushoorn in Dutch (literally : "nose horn"), referring to the perceived typical Jewish nose. One of them is called Jodocus, which refers to the Dutch word for Jew: jood, pronounced somewhat like the "Iod-" in Iodocus. The story also features a donkey, Boudewijn, occupying the throne. "Boudewijn" happened to be the Dutch name of the contemporary Belgian crown prince. This is a reference to the Belgian Nazi leader Léon Degrelle, leader of the Rex-movement ("Rex" is Latin for "King"). In the story, Reynard rounds up and kills most of the rhinoceroses, including Jodocus.[3]

Van den vos Reynaerde was also released as a cartoon film by Nederlandfilm in 1943.[4] The film was mostly paid with German money. While lavishly-budgeted, it was never presented publicly, possibly because most Dutch Jews had already been transported to the concentration camps and the film came too late to be useful as a propaganda piece, possibly also because the Dutch collaborationist Department of People's Information, Service and Arts objected to the fact that the fox, an animal traditionally seen as "villainous", should be used as a hero.[5] In 1991, parts of the film were found again in the German Bundesarchiv. In 2005, more pieces were found, and the film has been restored. The reconstructed film was shown during the 2006 Holland Animation Film Festival in Utrecht and during the KLIK! Amsterdam Animation Festival in 2008, in the Netherlands.[6]

Other adaptations, versions and references

In movies and television series 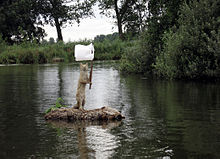 The surrender of Reynard the Fox, by Leonard van Munster.

A one-act chamber opera-ballet by Igor Stravinsky, written in 1916, with text by the composer based on Russian folk tales from the collection by Alexander Afanasyev.