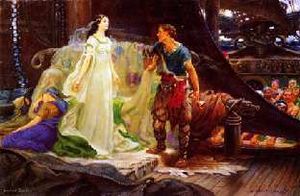 Tristan /ˈtrɪstən/ (Latin/Brythonic: Drustanus; Welsh: Drystan, Trystan; also known as Tristran, Tristram /ˈtrɪstrəm/, etc.) is one of the main characters of the Tristan and Iseult story, a Cornish hero and one of the Knights of the Round Table featuring in the Matter of Britain. He is the son of Blancheflor and Rivalen (in later versions Isabelle and Meliodas), and the nephew of King Mark of Cornwall, sent to fetch Iseult back from Ireland to wed the king. However, he and Iseult accidentally consume a love potion while en route and fall helplessly in love. The pair undergo numerous trials that test their secret affair.

Tristan makes his first medieval appearance in the early twelfth century in Celtic folklore circulating in the north of France. Although the oldest stories concerning Tristan are lost, some of the derivatives still exist. Most early versions fall into one of two branches, the "courtly" branch represented in the retellings of the Anglo-Norman poet Thomas of Britain and his German successor Gottfried von Strassburg, and the "common" branch, including the works of the French poet Béroul and the German poet Eilhart von Oberge.

Arthurian romancier Chrétien de Troyes mentions in his poem Cligès that he composed his own account of the story; however, there are no surviving copies or records of any such text. In the thirteenth century, during the great period of prose romances, Tristan en prose or Prose Tristan appeared and was one of the most popular romances of its time. This long, sprawling, and often lyrical work (the modern edition takes up thirteen volumes) follows Tristan from the traditional legend into the realm of King Arthur where Tristan participates in the Quest for the Holy Grail. In the fifteenth century, Sir Thomas Malory shortened this French version into his own take, The Book of Sir Tristram de Lyones, found in his Le Morte D'Arthur.

There are strange aspects to Tristan, such as his Pictish name. Drust is a very common name of Pictish kings, and Drustanus is merely Drust rendered into Latin. It may have originated from an ancient legend regarding a Pictish king who slew a giant in the distant past, which had spread throughout the isles. The name may also come from a sixth-century Pictish saint who bore another form of the name. In addition, there was a Tristan who bore witness to a legal document at the Swabian Abbey of Saint Gall in 807AD.

Another strange aspect is his kingdom, Lyonesse, for whose existence there is no evidence. However, there were two places called Leonais: one in Brittany, the other the Old French transcription of Lothian. However, the Isles of Scilly have also been proposed to be this place, since they were possibly one island until Roman times and several islands are interconnected at low tide. Regardless, Tristan being a prince of Lothian would make his name more sensible, Lothian being on the borderlands of the Pictish High-Kingship (and once was a part of Pictish territory; Tristan may in fact have been a Pictish prince under a British King). One other suggestion is that he could have been adopted into the family of Mark of Cornwall, an historical a practice attested in Roman law.

Possible evidence for his Cornish roots is the 5th century inscribed Tristan Stone, set beside the road leading to Fowey in Cornwall. It measures some 7 feet in height and has been set in a modern concrete base. Until the 1980s it was in its original position some yards from the coastal road in a field near the turn down to the small harbour of Polkerris. It was then closer to Castle Dore and may have been the origin of the association of this site with the story of the tragic love of Tristan and Iseult. There is a Tau cross on one side and a Latin inscription on the other side, now much worn, reading:[1]

It has been suggested, and is confidently asserted on the plaque by the stone, that the characters referred to are Tristan, of which Drustan is a variant, and Cynvawr Latinized to Cunomorus. Cynvawr, in turn, is said by the ninth-century author Nennius, who compiled an early pseudo-historical account of King Arthur, to be identified with King Mark.

The writer Sigmund Eisner concluded that the name Tristan comes from Drust, son of Talorc, but that the legend of Tristan as we know it, was gathered together by an Irish monk living in North Britain around the early eighth century.[2] Eisner explains that Irish monks of this time would have been familiar with the Greek and Roman narratives that the legend borrows from such as Pyramus and Thisbe; they would also have been familiar with the Celtic elements of the story such as The Pursuit of Diarmuid and Gráinne. Eisner concludes that “the author of the Tristan story used the names and some of the local traditions of his own recent past. To these figures he attached adventures which had been handed down from Roman and Greek mythology. He lived in the north of Britain, was associated with a monastery, and started the first rendition of the Tristan story on its travels to wherever it has been found.”[3]

From 1857 to 1859, Richard Wagner composed the opera Tristan and Isolde, now considered one of the most influential pieces of music of the 19th century. In his work, Tristan is portrayed as a doomed romantic figure.

Algernon Charles Swinburne wrote an epic poem Tristram of Lyonesse. The story has also been adapted into film many times. [1]

The legend of Tristan has also been represented through the song of the same name by English singer-songwriter Patrick Wolf, and was the lead single from his 2005 album, 'Wind in the Wires'.

Tristan plays a prominent role in the comic book series Camelot 3000, in which he is reincarnated in A.D. 3000, as a woman and subsequently struggles to come to terms with his new body, sexuality and identity, reconciling them in turn with his previous notions of gender roles.

In 1983, Russian composer Nikita Koshkin wrote a classical guitar solo entitled Tristan Playing the Lute, evoking the spirit of Tristan from the legend of "Tristan and Isolde", initially set in a playful adaptation of traditional English lute music. According to Koshkin:

"Tristan was written as a musical joke. It was a period when I was fond of all the stories about King Arthur and his Knights of the Round Table. Tristan was not only a great fighter, but he also played many musical instruments and had a beautiful singing voice. This is why I thought he could be the subject of a piece to suggest the process of improvising in a characteristic early style that then begins to change to futuristic musical ideas. The first section of the piece is clearly ancient in style; the second is more modern; then the third introduces elements of Eastern music as well as some rock riffs. The idea is that Tristan, during his improvising, is building musical bridges to the future."

The story has also been adapted into film many times. [2] In the 2004 film, King Arthur, based on the Sarmatian connection theory of origin for the Arthurian legends, Tristan (Mads Mikkelsen) is a prominent member of the knights, who are Sarmatians serving under a half-Roman Arthur in the 5th century. Tristan is a cavalry archer, able to make amazing shots with his bow, a Mongol/Eurasian style reflex composite bow. This bow has much greater range and accuracy than the Northern Longbow. In addition, its smaller size, easier handling and maneuverability, provide the ability to shoot from horseback without sacrificing its symmetrical shape. He uses a Chinese Beile Dao sword and holds true to the style, armour and weapons, of a Sarmatian mounted archer - who were much like Parthians, Mongols and other mounted warriors from the area surrounding and including the Eurasian Steppe. After many injuries, he dies an heroic death at the hand of the Saxon King Cerdic in single combat at the Battle of Badon Hill.

The 2006 film Tristan & Isolde starred James Franco as Tristan, Thomas Sangster as the child Tristan and Sophia Myles as Isolde. The film was produced by Tony and Ridley Scott, written by Dean Georgaris and directed by Kevin Reynolds.