Garfield Avenue is a station on the Hudson-Bergen Light Rail (HBLR)[1] located at Union Street CR 610[2] in the Claremont Section of Jersey City, New Jersey.[3] The station opened on April 22, 2000. It is at the eastern end of railroad original cut originally excavated in Bergen Hill in 1869 for the Central Railroad of New Jersey Newark and New York Railroad Branch. Garfield Avenue, presumably named for assassinated president James A. Garfield, was once part of Bergen Point Plank Road, which itself had once been a major colonial post road. A decorative theme for the station is two dimensional "cut-outs" of adults ad children, some of whom are playing.[4]

Direct northbound service from the station is available to Tonnelle Avenue in North Bergen. Northbound service to Hoboken Terminal requires a transfer at stations between Liberty State Park and Pavonia-Newport. Southbound service is available towards West Side Avenue in Jersey City. Connection to PATH trains to Midtown Manhattan and to New Jersey Transit commuter train service are available at Hoboken Terminal. Transfers to PATH trains to Newark, Harrison, and Downtown Manhattan are available at Exchange Place. The Liberty State Park station is the transfer point for those traveling between stations on the West Side, Jersey City and Bayonne) branches. 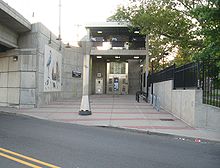