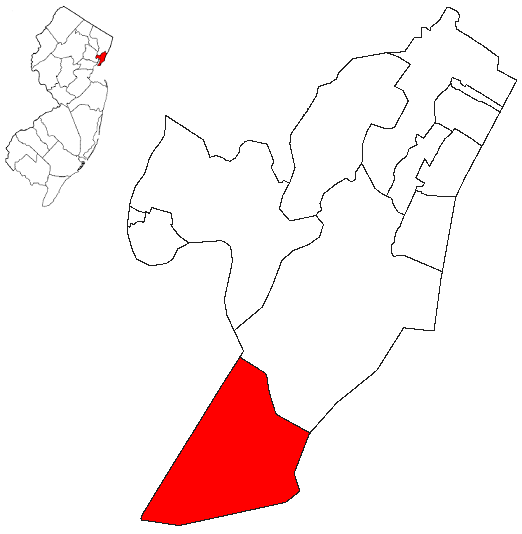 Bayonne was originally formed as a township on , , from portions of Bergen Township. Bayonne was reincorporated as a city by an Act of the on , , replacing Bayonne Township, subject to the results of a referendum held nine days later.

Bayonne was first home to the Lenni Lenape Native Americans before the arrival of Henry Hudson. Henry Hudson first sailed through the into in 1609, where it is said he dropped anchor at Birds' Point, now Constable Hook. Hudson claimed the area for the . Then in 1646, gave , chief gunner or konstapel at , a grant of land later known as Constable Hook. Further expansion of the territory came in 1654 when Dutch Director-General gave out numerous land grants in the upper part of the peninsula (modern-day 30th street) which, was named Pamrapo. In 1661, the Bergen Township was formed by the Dutch which, stretched southward to Bergen Point. The area then came under British rule in 1664 after they defeated the Dutch for the area. In 1714, the Township of Bergen became one of three townships in the new County of Bergen. In 1776, during the , British and patriot forces clashed at Fort Delancy in what is now Bayonne. [ [http://www.bayonnenj.org/historical/timeline.htm Timeline for the Founding and History of the City of Bayonne] , Bayonne Historical Society. Accessed , .]

In 1836, the which ran from Phillipsburg to Newark during the time, was extended to Bergen Neck to . On , the approved unification of Bergen Point, Centerville, Salterville, and Constable Hook into the Township of Bayonne. The City of Bayonne was approved by the New Jersey Legislature in 1869. Industrial growth came to in 1872 when bought land there. Later, in 1875 Prentice Oil Company also established at Constable Hook. It would later be sold to a subsidiary of the called Empire Transportation Company, a competitor of . Even more expansion came to Bayonne when Tide Water Oil Company, previously located in Pennsylvania, relocated.

Bayonne is located south of on a peninsula surrounded by New York Bay to the east, Newark Bay to the west, and the to the south.

Bayonne, like New York City has a climate according to the . The climate in Bayonne is moderated by the nearby ocean and surrounding waters.

The City of Bayonne is governed under the system of municipal government by a mayor and a five-member city council. The council has three members from wards and two elected at large, all of whom serve four-terms in office, elected concurrently in non-partisan elections. ["2005 New Jersey Legislative District Data Book", , April 2005, p. 139.]

The current of Bayonne is Terrence Malloy, who was selected by the City Council in October 2007 to serve as mayor on an interim basis, after the resignation of former mayor on , to serve as Commissioner of the . [Sullivan, Al. [http://www.hudsonreporter.com/site/news.cfm?newsid=18960366&BRD=1291&PAG=461&dept_id=532622&rfi=6 "Malloy's the one: Acting mayor named in divided council vote"] , "", , . Accessed , . "In casting the deciding vote in favor of making city Business Administrator Terrence Malloy the mayor for the next 14 months, City Council President and Acting Mayor Vincent Lo Re said that his need to spend time with his family discouraged him from seeking the post for himself."] Malloy will serve as interim mayor until a November 2008 special election. [ [http://www.bayonnenj.org/mayor.htm Office of the Mayor] , City of Bayonne. Accessed , .]

Private high schools in Bayonne include and Marist High School.

Bayonne is connected to , by the . The Bayonne Bridge is lit in patriotic colors (red, white & blue) in the evenings, as a 9/11 memorial initiated by a then 8-year-old girl in the summer of 2002, Veronica Marie Granite, with the assistance of then-Municipal Councilmember-at-Large Maria Karczewski.

Route 440 runs along the east side of Bayonne, and the west side of Jersey City, following the old route. Although it has traffic lights it is usually the quickest way to go north-south within Bayonne. It connects to the Bayonne Bridge, I-78, and to Route 185 to .

Bus transportation is provided on three main north-south streets of the city: Broadway, Kennedy Boulevard, and Avenue C, both by the state-operated and several private bus lines. The Broadway line runs solely inside Bayonne city limits, while bus lines on Avenue C and Kennedy Boulevard run to various end points in Jersey City. One Kennedy Boulevard service (the 99S) runs to the in midtown , , and rush hours peak direction the NJ Transit 120 runs between Avenue C in Bayonne and Battery Park in , while the 81 provides service to New Jersey. [ [http://www.njtransit.com/sf_tp_rc_hudson.shtml Hudson County Bus/rail Connections] , . Accessed , .]

The , which was completed in the year 2000 currently has stops throughout Bayonne, Jersey City, Hoboken, Weehawken, Union City and North Bergen.

A fourth station, 8th Street, which will be located at Avenue C, is under construction. Incidentally, all of these stations were the original train stations for the old railway system.

Service within Bayonne is available between these three stations. Northbound service from Bayonne runs through Jersey City, mostly near the waterfront, to . Other parts of the system can be accessed via transfers. The Tonnelle Avenue (in North Bergen) and other stations north of Hoboken Terminal can also be reached by transferring at stations between Liberty State Park and Pavonia-Newport for the West Side Avenue-Tonnelle Avenue route, or at Hoboken Terminal for the Tonelle Avenue-Hoboken route. The Liberty State Park station is a transfer point for those traveling between Bayonne and stations on the West Side Avenue (Jersey City) line. Connection to PATH trains to midtown and to commuter train service are available at Hoboken Terminal, and connections to PATH trains to midtown Manhattan are available at the Hoboken Terminal and Pavonia-Newport stations. Transfers to PATH trains to Newark, Harrison, and downtown Manhattan are available at Exchange Place.

Portions of Bayonne are part of an . In addition to other benefits to encourage employment within the Zone, shoppers can take advantage of a reduced 3½% rate (versus the 7% rate charged statewide). [ [http://www.state.nj.us/njbusiness/financing/tax/geographic.shtml#2 Geographic & Urban Redevelopment Tax Credit Programs: Urban Enterprise Zone Employee Tax Credit] , State of . Accessed , .]

Currently, the city of Bayonne is working on building projects on the former (MOTBY). Plans for the site include new housing and businesses.

Bayonne Golf Club, a private Irish/Scottish-links style golf course is planned to be constructed on the site of the former city dump. A flagpole, displaying a large American flag that is visible from Manhattan and surrounding communities, has been erected at the site where the clubhouse will be built in 2007.

Proposed projects include construction of the September 11th memorial park for the monument, and completing Bayonne's section of the 18-mile , stretching from Newark Bay in Bayonne to Bellman's Creek in North Bergen.

The RiverWalk section in Bayonne, if fully completed, would run from the southwest corner of the town in an area where the Kill Van Kull meets the Newark Bay, to the northwestern point of the area. That is according to Joseph Ryan, spokesperson for Bayonne Mayor Joseph Doria.

The ribbon was cut and the plaque unveiled on , , for the new Richard A. Rutkowski Park in Bayonne, a wetlands preserve on the northwestern end of Bayonne, which will be part of the future RiverWalk. Also known as the Waterfront Park and Environmental Walkway, it is located immediately north of the Stephen R. Gregg Hudson County Park.

joined a contingent of state and federal officials to announce on , . that funding was in place to extend the system to Eighth Street in Bayonne. With the engineering work nearly complete, work on the rail line and the station is expected to start by 2008 and should be complete by 2009. [ [http://www.nj.com/news/jjournal/index.ssf?/base/news-1/1146734419222510.xml&coll=3 Funds to stretch light rail to 8th St. in Bayonne] , "", , .]

The long-planned Bayonne Crossing, a power center to be located on Route 440, has finally gotten the green light to begin construction, according to a statement made by Michael O'Connor, executive director of the Bayonne Economic Development Corp. Cameron Group, the conditional developer for the site, will soon begin construction. [ [http://www.cameronllc.com/PropertyDisplay.aspx?id=1010 Bayonne Crossing] ] Announced tenants include anchor stores , Home Improvement, and , as well as Coffee, , and Sleepys. [ [http://www.cameronllc.com/FileDownload.aspx?type=f1&id=1010 Bayonne Crossing Marketing Summary] ]

*, a comic by cartoonist Bud Grace, takes place in Bayonne.
*The inspiration for the film "", , hails from Bayonne. The "Bayonne Bleeder" went fifteen rounds against .
*The 19th Century town of Saltersville, New Jersey (a Civil War training area) is now a part of Bayonne. A notable regiment stationed there was the who were encamped and mustered in on and , at Newark Bay House, a resort hotel on the western shore of the Bayonne peninsula.
*The main street in Bayonne is known as Broadway, and was named after the avenue in . It was originally named Avenue D, since it is bounded on either side by Avenues C and E.

The , which connects Bayonne to Staten Island, was completed in November, 1931. At the time, it was the longest ever constructed. Today, it is the third-longest such bridge, with the in , and the in being first- and second-longest respectively.
* began its initial operations in Bayonne when bought a kerosene works on the eastern shore. It eventually encompassed all of the Constable Hook section of Bayonne; Avenues J and East 22nd Street are all that remain.
*Many (for "Patrol Torpedo"), small, fast vessel used by the in to attack larger s were built between 1942 and 1945 by Elco (Electric Launch Corporation) at Bayonne. Elco later merged with its sister company, , in 1948, to form .
*Bayonne was a bedroom community and shore resort for the wealthy and elite as early as 1889. The La Tourette Hotel on the southern shore along was its centerpiece.
*The (formerly the ), located on the Eastern Side of Bayonne is now home to television and movie studios for shows such as HBO's "Oz" (1997-2003), "A Beautiful Mind" (2001) and "" (2004).
*Films such as "" (2002), "" (1991), "" (2002), and "War of the Worlds" were all shot on location in Bayonne.
*The Bayonne Bridge and some of the downtown streets were filmed for the making of Spielberg's "War of the Worlds". The bridge and major portions of Bayonne were destroyed by aliens in the film.
*Some scenes from the Nickelodeon television show "" were shot in Bayonne. Scenes that took place in Wellsville High School were shot in and .
*The 1996 TV show "" starring , with Williams portraying a fictional high school teacher, was filmed almost entirely in Bayonne, with scenes shot at Bayonne High School.
*The music videos "Someday" by and "Popular" by were filmed on location at Bayonne High School, as were the classroom scenes of 's "Jeremy" video.
*The film version of "" filmed scenes taking place at Flatpoint High inside Bayonne High School.
*The movie "Crooks", starring comedian Jim Norton and directed by Paul Battista was filmed on location in Bayonne.
*'s famed guitarist was born and raised here.
*After the collapse of the there were proposals for the construction of a 2,000-foot TV tower at Bayonne. These plans seemed to be cancelled. [ [http://www.cpanj.com/capitalreportpages/politicaltrack/may2003/BAYONNE%20TV%20TOWER%20PROPOSAL%20IN%20QUESTION.htm BAYONNE TV TOWER PROPOSAL IN QUESTION] , "New Jersey Capital Report", , .]
*When "" was broadcast from during the 1960s, host liked to make jokes about various New Jersey cities. He claimed on several occasions that his personal tailor was "Raul of Bayonne".
*Bayonne police officers were the first to have police radios in their police cars. They also were one of the first to use the police .
*In the 1997 film "Men in Black", starring and , they mention that Bayonne has been taken over by aliens.
*The Bayonne Bridge is the sister bridge of the located in , .
*Bayonne is often used as the butt of jokes on television shows such as "The Odd Couple" (Frosty the maid was hailed as the "Beast from Bayonne") another episode Oscar says about his loyal poker buddies "Guys I got my hand stamped together at Bayonne High" , "", (episode with Mickey Rooney Season 3) and "", among many others.
*Bayonne is also mentioned in the movie "How to Lose a Guy in Ten Days" when actor Matthew McConaughey says "Whenever someone flushes a toilet in Bayonne, you are going to get scolded."
* starring and takes place in Bayonne, the character played by De Niro also mentions Bayonne during a welcome.
*Bayonne is also mentioned several times in the original 39 episodes of the 1950s TV Classic, "".
*Harrington's Auto Body was recreated and destroyed in the movie starring .