/ˈmaɪmə/) is a term used for low, flattened, circular to oval, domelike, natural mounds found in the northwestern United States, Idaho, Oregon, and Washington, that are composed of loose, unstratified, often gravelly sediment that is an overthickened A Horizon. These mounds range in diameter from 3 to more than 50 m; in height 30 cm to greater than 2 m; and in density from several to greater than 50 mounds per hectare. Within the northwestern United States, they are typically part of what is commonly known as hog-wallow landscape. This type of landscape typically has a shallow basement layer such as bedrock, hardpan, claypan, or densely bedded gravel. In the northwestern United States, Mima mounds also occur within landscapes where a permanent water table impedes drainage, creating waterlogged soil conditions for prolonged periods. Mima mounds are named after the Mima Prairie in Thurston County, Washington.[1][2][3][4]

Mima mounds occur outside the northwestern United States in three major regions west of the Mississippi River as illustrated by Cox.[1] and Washburn[4] First, they are found in a strip consisting of northwest Baja California, western and northcentral California, and southcentral Oregon where they are typically known as "hogwallow mounds". Within this strip and the area of San Diego, they are often an integral part of the local vernal pool landscape.[2] Second, they are found in a roughly north-south strip of the Great Plains containing parts of northcentral New Mexico, and central Colorado, and central Wyoming where they are typically called "prairie mounds". Third, they are found in an area containing parts of East Texas, western Louisiana, southeast Oklahoma, and southern Missouri where they are commonly known as either "pimple mounds" or "prairie mounds". Finally, isolated patches of Mima mounds also are found in Iowa, eastern North Dakota, and northwest Minnesota.[1][4]

Within Louisiana, Missouri, Oklahoma, and Texas, pimple mounds, also called locally "prairie mounds" and "natural mounds", consist of low, flattened, circular to oval, domelike, mounds composed of loose, sandy loam or loamy sand. Typically, these mounds consist entirely of a thickened loamy and sandy A and E horizons lying either on a more or less flat or slightly, but noticeably depressed, clayey B horizon. Pimple mounds range in diameter from 6 m to more than 45 m; in height 30 cm to greater than 1.2 m; and in density from several to greater than 425 mounds per hectare. Unlike the Mima mounds of Oregon and Washington, pimple mounds are not limited to the relatively flat and poorly drained surfaces, i.e. late Pleistocene coastal and fluvial terraces. They also occur in abundance of the slopes, summits and crests of hills created by the deep erosion and dissection of unconsolidated and unlithified early Pleistocene and middle Pleistocene, Pliocene, and older coastal plain sediments. Rarely, pimple mounds that occur on these hillslopes are elongated in an upslope-downslope direction.[5][6][7][8]

Excavations made into the Washington mounds show that underneath a blanket of prairie grass lies a mixture of loose sand, fine gravel, and decayed plants. Not all mima mound features have the same structure though. One mound in Washington had a very complex soil profile: A horizon is a black sandy loam (due to charcoal content from aboriginal burning on the prairies), B horizon is a gravelly sandy loam, C horizon is an extremely gravelly sand.[9] Bernard Hallet, a geologist at the University of Washington[citation needed] explains that this is unusual, as most land surfaces have a top layer of organic material, dead plants and animals, no more than half a meter (1.6 ft) thick, while Mima mounds are made of organic-rich soil more than 2 meters thick.[citation needed] 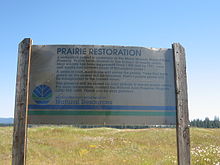 One major theory concerning the origin of Mima mounds argues that they were created by pocket gophers—small, burrowing rodents with fur-lined "pockets," or pouches, in their cheeks. The theory is that gophers tunneling into loose soil run into a gravel layer below. Unable to burrow any farther, the gophers start building upward and outward. The theory's author, George Cox, a retired zoologist at San Diego State University, says that a gopher family often can move up to 5 tons of earth a year.[citation needed] That's one-twentieth of the soil in an average Mima mound.[citation needed] Cox also asserts, most North American mounds are in gopher territory, and many gophers actually live in mounds. However, the only pocket gophers ever spotted on Mima Prairie built their burrows between the mounds, not in them[citation needed]. It is unclear whether gophers created the mounds or migrated to them because the mounds provided handy home sites.

Another major theory concerning the origin of pimple and prairie mounds argues that they are either coppice dunes or nebkhas formed by the accumulation of wind-blown sediments around clumps of vegetation. For example, based on grain-size data of and optically stimulated luminescence ages obtained from pimple mounds in the south-central United States, Seifert and others[10] concluded that these mounds consisted of wind blown sediments that accumulated during prolonged late Holocene droughts. They suggest that although they superficially resemble the mima mounds of the northwestern United States, the pimple mounds of south-central United States have a greatly different origin from them.

Andrew Berg, a geologist with the U.S. Bureau of Mines in Spokane, proposed that Mima and pimple mounds were the result of very intense ground shaking resulting from major earthquakes.[11] He formulated this hypothesis while building a dog house.[12] As he hammered together sheets of plywood coated with volcanic ash, he noticed that the hammering vibrations caused the ash to heap into small mounds that looked a lot like miniature Mima mounds. From that observation, Berg hypothesized that vibrations from violent earthquakes could have formed the Mima mounds. According to Berg, the soil on the Mima Prairie is like volcanic ash, and the layer of rock below that is like a plank of wood. When seismic waves move through the hard ground and bump into faults, or large fractures in the ground, the waves bounce backward. Those ricocheted waves collide with other seismic waves from the quake, and between the collision points, the soil rises and forms mounds. Berg claims that Mima mounds occur only in seismically active areas—areas where the ground is unstable and many earthquakes occur. The area where the Washington Mima mounds are found experienced a major earthquake about 1,000 years ago.

A 2009 study using lidar data and published by researchers at Washington Department of Natural Resources showed that the retreat of the ice-age glaciers could account for the mima mounds' formation. A feature of this theory is that meltwater from the glaciers carried gravel to sun cups, where it was deposited and formed mounds after glaciers had fully retreated.[13]

Vernal Pools are shallow depressions that fill with water during winter rains.[14] Water accumulates below the soil surface and above a layer of hardpan or impermeable substance, creating a seasonally perched water table. Water is prevented from percolating underground, leaving evaporation as the only means of escape.[15] The mima mounds located in the California Floristic Province (west of the Sierra Nevada and Cascade ranges from Southern Oregon to Baja California.[16] Coincidentally, mima mounds are located in Washington and Oregon State, west of the Cascade Range, and likewise throughout California west of the Sierra Nevada Range.

Shrinking and Swelling of Silts

When clay is exposed to large amounts of water, the water collects between the clay minerals (which are flat planes). Due to the shape of the minerals, the water travels in between the compacted layer, thus "swelling" the clay-bed into mound-like features. Silts are also capable of this type of geomorphologic feature; however, silt is coarser-grained sediment so the minerals do not "hold" water in the same way. Silt is more penetrable than clay is, but since the area around the base of the mima mounds are a loamy soil[17], the composition allows water to swell and shrink in a similar fashion to clay, but on a smaller scale.

Mima mounds have been featured in the writings of Laird Barron, in which they have been alluded to as the source or symptom of various supernatural or unexplained events. The climax of his story "Proboscis" takes place at mima mounds located in Washington. An extensive reference list pertaining to the geology of silt mounds can be found here[19], and geoarchaeology of silt mounds here.[20]