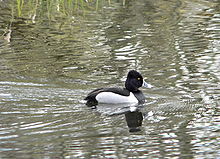 Ring-necked Duck near the visitors center

The Nisqually National Wildlife Refuge is a wildlife preserve operated by the United States Fish and Wildlife Service on the Nisqually River Delta near Puget Sound in northeastern Thurston County, Washington and northwestern Pierce County, Washington. The refuge is located just off Interstate 5, between the cities of Tacoma and Olympia.

The 12.6 km2 refuge was created in 1974 to provide habitat and nesting areas for waterfowl and other migratory birds. It includes a protected estuary, salt marshes and open mudflats, freshwater marshes, open grassland, and riparian woodland and brush. An additional 3.2 km2 (15.4 km2 planned) is protected by the disjoint Black River Unit on a tributary of the Chehalis River.

The wildlife refuge is home to the Nisqually River Delta, which has the unique status as Washington’s largest, relatively undisturbed estuary. The confluence of the freshwater Nisqually River and the saltwater south Puget Sound has created a variety of unique environments, each rich in nutrients and natural resources for the local wildlife. A five-mile dike separates the freshwater from the saltwater, providing habitats for more than 300 different species of fish and wildlife.[1]

Sea life features 24 species of fish located in one of three habitats: riverine, estuarine or the Nisqually Reach nearshore. Large populations of Fall Chinook Salmon, Starry flounder and Shiner Perch offer a sampling of the fish that are abundantly available. Water mammals range in size from small porpoises to whales.[2]

The saltmarshes and mudflats are located outside of the dikes. Rich in nutrients, they are the home to clams, crabs, shrimp and worms, which in turn feed ducks, gulls and herons.

Over 20,000 birds, made up of 275 different migrating species, use the freshwater marshes and grasslands for breeding, resting or wintering. The most abundant bird types include raptors, shorebirds and songbirds. Larger animals such as hawks and coyotes feast in the grassland due to the presence of mice and voles.

The riparian woodland and brush habitats contain many amphibians, mammals and reptiles.