Lanzarote
This article deals with the Canary Island. For other meanings, see Lanzarote (disambiguation).

Lanzarote (pronounced: [lanθaˈɾote] or [lansaˈɾote]), a Spanish island, is the easternmost of the autonomous Canary Islands, in the Atlantic Ocean, approximately 125 km off the coast of Africa and 1,000 km from the Iberian Peninsula. Covering 845.9 km2, it stands as the fourth largest of the islands. The first recorded name for the island, given by Angelino Dulcert, was Insula de Lanzarotus Marocelus, after the Genoese navigator Lancelotto Malocello, from which the modern name is derived. The island's name in the native language was Titerro(y)gatra, which may mean "the red mountains".

Lanzarote is situated at 29°00' north, 13°40' west. It is located 11km north-east of Fuerteventura and just over 1km from Graciosa. The dimensions of the island are 60 km from north to south and 25 km from west to east. Lanzarote has 213 km of coastline, of which 10 km are sand, 16.5 km are beach, and the remainder is rocky. Its dramatic landscape includes the mountain ranges of Famara (671 m)[1] in the north and Ajaches (608 m) to the south. South of the Famara massif is the El Jable desert which separates Famara and Montañas del Fuego. The highest peak is Peñas del Chache rising to 670 m above sea level. The "Tunnel of Atlantis" is the largest submerged volcanic tunnel in the world. 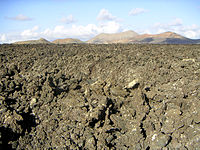 View over a lava field towards the Montañas del Fuego.

Lanzarote is the easternmost island of the Canary Islands and has a volcanic origin. It was born through fiery eruptions and has solidified lava streams as well as extravagant rock formations. The island emerged about 15 million years ago as product of the Canary hotspot. Alfred Wegener's study of the island whilst visiting in 1912 showed how it fitted in with his theory of continental drift. The island, along with others, emerged after the breakup of the African and the American continental plates. The greatest recorded eruptions occurred between 1730 and 1736 in the area now designated Timanfaya National Park. 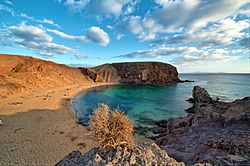 The island has an international airport, Arrecife Airport, through which 5,438,178 passengers travelled in 2008.[5] Tourism has been the mainstay of the island's economy for the past forty years, the only other industry being agriculture. The emblem of Lanzarote is a demon because people had never seen a volcano erupt before so they thought it was the devil.

Lanzarote is part of the province of Las Palmas, and is divided into seven municipalities: 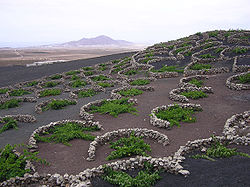 Vines growing in volcanic lapilli in the La Geria region of Lanzarote. The low, curved walls are traditionally used to protect the vines from the constant wind.

There are five hundred different kinds of plants and lichen on the island of which 17 species are endemic and there are 180 different lichen. Lichens survive in the suitable areas like the rock and promote weathering. These plants have adapted to the relative scarcity of water, the same as succulents. Plants include the Canary Island Date Palm (Phoenix canariensis), which is found in damper areas of the north, Canary Island Pine (Pinus canariensis), ferns, and wild olive trees (Olea europaea). Laurisilva trees which once covered the highest parts of Risco de Famara are rarely found today. After winter rainfall, the vegetation comes to a colourful bloom between February and March. The fauna of Lanzarote is less varied than the plant life, except for bats and other types of mammals which accompanied humans to the island, including the dromedary which was used for agriculture and is now a tourist attraction. Lanzarote has thirty-five types of animal life, including birds (such as falcons), and reptiles. Some interesting endemic creatures are the Gallotia lizards, and the blind Munidopsis polymorpha crabs found in the Jameos del Agua lagoon, which was formed by a volcanic eruption. It is home to one of two surviving populations of the threatened Canarian Egyptian Vulture.

The vineyards of La Gería (a sub-zone of the Lanzarote Denominación de Origen wine region), with their traditional methods of cultivation, are a protected area. Single vines are planted in pits 4-5 m wide and 2-3 m deep, with small stone walls around each pit. This agricultural technique is designed to harvest rainfall and overnight dew and to protect the plants from the winds. The vineyards are part of the World Heritage Site as well as other sites on the island.

Lanzarote was probably the first Canary Island to be settled. The Phoenicians settled there around 1100 BC. The Greek writers and philosophers Herodotus, Plato and Plutarch described the garden of Hesperids, the land of fertility where fruits and flowers smell in the part of the Atlantic.

The first known record came from Pliny the Elder in the encyclopedia Naturalis Historia on an expedition to the Canary Islands. The names of five islands (then called Insulae Fortunatae) were recorded as Canaria (Gran Canaria), Ninguaria (Tenerife), Junonia Major (La Palma), Plivalia (El Hierro) and Capraria (La Gomera). Lanzarote and Fuerteventura, the two easternmost Canary Islands, were only mentioned as the archipelago of the "purple islands". The Roman poet Lucan and the Egyptian astronomer and geographer Ptolemy gave their precise locations.[6] After the fall of the Roman Empire, the Canary islands were ignored until 999 AD when the Arabs arrived at the island which they dubbed al-Djezir al-Khalida and other names.

In 1336, a ship arrived from Lisbon under the guidance of Lanzarote da Framqua, alias Lancelotto Malocello. A fort was later built in the area of Montaña de Guanapay near today's Teguise.

Jean de Béthencourt arrived in 1402 on a private expedition to the Canary Islands and brought slavery to the island as well as raw materials. Bethencourt first visited the south of Lanzarote at Playas de Papagayo. In 1404, the Castilians with the support of the King of Castile came and fought against a rebellion among the local Guanches. The islands of Fuerteventura and El Hierro were later conquered.

From 1730 to 1736 (for 2,053 days), the island was hit by a series of volcanic eruptions, producing 32 new volcanoes in a stretch of 18 km. The minister of Yaiza Don Andrés Lorenzo Curbelo documented the eruption in detail until 1731. Lava covered a quarter of the island's surface, including the most fertile soil and eleven villages. One hundred smaller volcanoes were located in the area called Montañas del Fuego.

In 1768, drought affected the island and winter rains did not fall. Much of the population was forced to emigrate to Cuba and the Americas. Another volcanic eruption occurred within the range of Tiagua in 1824 which was less violent than the major eruption between 1730 and 1736.

In 1927, Lanzarote, along with Fuerteventura, became part of the province of Las Palmas.

In 2007, a team from the Universidad de Las Palmas de Gran Canaria and a team from the Universidad de Zaragoza, Spain uncovered the prehistoric settlement of El Bebedero yielding about 100 Roman potsherds, nine pieces of metal, and one piece of glass. The artifacts were found in strata dated between the first and fourth centuries AD. The finds show that Romans did trade with the Canaries, though there is no evidence of settlements.[6]

The island has a UNESCO Biosphere Reserve protected site status. According to a report in the Financial Times, this status was endangered by a local corruption scandal. Since May 2009, police have arrested the former president of Lanzarote, the former mayor of Arrecife and more than 20 politicians and businessmen in connection with illegal building permits along the Lanzarote's coastline. UNESCO has threatened to revoke Lanzarote's Biosphere Reserve status, "(i)f the developments are not respecting local needs and are impacting on the environment".[7][8]

The President of the Cabildo of Lanzarote denied "any threat to Lanzarote's UNESCO status".[9][10]

Among the notables who have lived on the island are César Manrique, an artist; José Saramago, a Portuguese Nobel Prize for Literature winner who died there, and Princess Alexia of Greece and Denmark and her husband, Carlos Morales Quintana.

Hacha Grande, in the south of the island, viewed from the road to Papagayo beach.

Salinas de Janubio, in the west of the island.