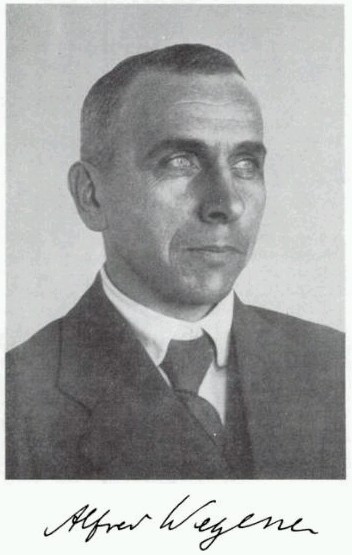 Alfred Lothar Wegener (, – or 3, 1930) was a German and . He was born in . He is most notable for his theory of ("Kontinentalverschiebung"), proposed in 1915, which hypothesized that the s were slowly drifting around the Earth. However, at the time he was unable to demonstrate a mechanism for this movement; this combined with a lack of solid evidence meant that his hypothesis was not accepted until the 1950s, when numerous discoveries provided evidence of continental drift.

Wegener had early training in (Ph.D., , 1904). He became very interested in the new discipline of (he married the daughter of famous meteorologist and climatologist ) and as a record-holding balloonist himself, pioneered the use of s to track air masses. His lectures became a standard textbook in meteorology, "The Thermodynamics of the Atmosphere". Wegener was part of several expeditions to to study polar air circulation, when the existence of a itself was highly controversial. On his last expedition, in Greenland, Alfred Wegener and his companion Rasmus Villumsen went missing in November 1930. Wegener's body was found on . His suspected cause of death was through overexertion.

Browsing the library at the , where he was teaching in 1911, Wegener was struck by the occurrence of identical in geological strata that are now separated by s. The accepted explanations or theories at the time posited s to explain the fossil anomalies; animals and plants could have migrated between fixed separate continents by crossing the land bridges. But Wegener was increasingly convinced that the continents themselves had shifted away from a primal single massive , which drifted apart about 180 , to judge from the fossil evidence. [ http://www.ucmp.berkeley.edu/history/wegener.html "Alfred Wegener (1880-1930)"] Wegener used land features, fossils, and climate as evidence to support his hypothesis of continental drift. Examples of land features such as mountain ranges in Africa and South America lined up; also coal fields on Europe matched up with coal fields in North America. Wegener noticed that fossils from reptiles such as Mesosaurus and Lystrosaurus were found in places that are now separated by oceans. Since neither reptile could have swum great distances, Wegener inferred that these reptiles had once lived on a single landmass that split apart.

From 1912 he publicly advocated the theory of "", arguing that all the continents were once joined together in a single landmass and have drifted apart.

In 1915, in "" ("Die Entstehung der Kontinente und Ozeane"), Wegener published the theory that there had once been a giant supercontinent, which, in later editions, he named "" (meaning "All-Lands" or "All-Earth") and drew together evidence from various fields. Expanded editions during the 1920s presented the accumulating evidence. The last edition, just before his untimely death, revealed the significant observation that shallower oceans were geologically younger.

In his work, Wegener presented a large amount of circumstantial evidence in support of continental drift, but he was unable to come up with a convincing mechanism. Thus, while his ideas attracted a few early supporters such as from South Africa and in , the hypothesis was generally met with skepticism. The one American edition of Wegener's work, published in 1924, was received so poorly that the organized a symposium specifically in opposition to the continental drift hypothesis. Also its opponents could, as did the er geologist , argue that the oceanic crust was too firm for the continents to "simply plow through". By the 1930s, Wegener's geological work was almost universally dismissed by the scientific community and remained obscure for some thirty years.

In the 1950s and 1960s, several developments in geology, notably the discoveries of and s, led to the rapid resurrection of the continental drift hypothesis and its direct descendant, the theory of . Alfred Wegener was quickly recognized as a founding father of one of the major scientific revolutions of the 20th century.

*- (Translated from the fourth revised German edition by John Biram)

*- (Translated from the fourth German edition by John Biram with an introduction by B.C. King)

*- (Translated from the seventh German edition by Winifred M. Deans)

*- (Wegener's "Thermodynamics of the Atmosphere")

Persondata
NAME=Wegener, Alfred Lothar
ALTERNATIVE NAMES=
SHORT DESCRIPTION=Interdisciplinary scientist and creator of the theory of
DATE OF BIRTH=,
PLACE OF BIRTH=,
DATE OF DEATH= or 3, 1930
PLACE OF DEATH=