The dromedary (pronounced /ˈdrɒmədɛəri/ or /ˈdrɒmədri/) or Arabian camel (Camelus dromedarius) is a large, even-toed ungulate with one hump on its back. Its native range is unclear, but it was probably the Arabian Peninsula. The domesticated form occurs widely in North Africa and the Middle East.[1] The world's only population of dromedaries exhibiting wild behaviour is an introduced feral population in Australia. 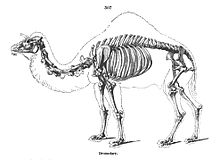 The skeleton structure of a dromedary 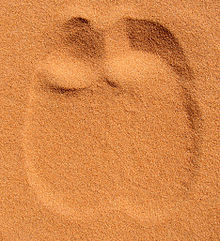 Male dromedaries have a soft palate, which they inflate to produce a deep pink sack, which is often mistaken for a tongue, called a doula in Arabic, hanging out of the sides of their mouths to attract females during the mating season.

Dromedaries are also noted for their thick eyelashes and small, hairy ears.

Dromedaries were first domesticated in central or southern Arabia. Some experts believe it happened around 4000 BC, others as recently as 1400 BC.

Today there are almost 13 million domesticated dromedaries, found mainly in the area from Western India via Pakistan through Iran to northern Africa. No dromedaries survive in the wild in their original range, although the escaped population of Australian feral camels is estimated to number at least 300,000[3] and possibly over 1 million.[4]

Around the second millennium BC, the dromedary was introduced to Egypt and North Africa. In recent times the dromedaries were introduced as domestic animals to the Canary Islands.

Although there are several other camelids, the only other surviving species of true wild camel today is the Bactrian camel. The Bactrian camel was domesticated sometime before 2500 BC in Asia, well after the earliest estimates for the dromedary. The dromedary is taller and faster than Bactrian camels. With a rider, they can maintain 8-9 mph (13-14.5 km/h) for hours at a time.

Dromedaries are used as beasts of burden in most of their domesticated range. Unlike horses, they kneel for the loading of passengers and cargo. Dromedaries have a reputation for being bad-tempered and obstinate creatures that spit and kick. A camel will show displeasure by stamping its feet and running.

Their hair is also used as a source material for woven goods, ranging from Bedouin tents to garments. They also have significant culinary uses. Dromedary meat is widely consumed in the Arabian Peninsula, Somalia, Sudan, and, to a lesser extent, Egypt, among other places. Dromedary milk is also consumed by people.[5] Border guards in many remote desert locations in Egypt use camels for patrols. Such mounted border guards are called هجان haggan (pl. هجانة hagganah). 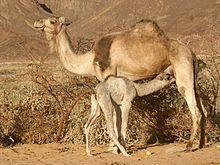 Camel milk is a staple food of desert nomad tribes, and is richer in fat and protein than cow milk. It is said to have many health-conserving properties. It is used as a medicinal product in India[citation needed] and as an aphrodisiac in Ethiopia. Bedouins believe the curative powers of camel milk are enhanced if the camel's diet consists of certain plants. The milk can readily be made into yogurt, but is difficult to make into butter or cheese. Butter or yogurt made from camel milk can have a faint greenish tinge.

Camel milk cannot be made into butter by the traditional churning method. It can be made if it is soured first, churned, and a clarifying agent added, or if it is churned at 24–25 °C (75–77 °F), but times vary greatly in achieving results. Until recently, camel milk could not be made into cheese because rennet was unable to coagulate the milk proteins to allow the collection of curds. Under the commission of the FAO, Professor J.P. Ramet of the École Nationale Supérieure d'Agronomie et des Industries Alimentaires was able to produce curdling by the addition of calcium phosphate and vegetable rennet.[6] The cheese produced from this process has low levels of cholesterol and lactose, but sales are limited owing to the low yield of cheese from milk and the uncertainty of pasteurization levels for camel milk, which makes adherence to dairy import regulations difficult.

A camel carcass can provide a substantial amount of meat. The male dromedary carcass can weigh 400 kg (900 lb) or more. The carcass of a female camel weighs less than the male, ranging between 250 and 350 kg (550 and 770 lb). The brisket, ribs and loin are among the preferred parts, but the hump is considered a delicacy and is most favored.[citation needed] It is reported[by whom?] that camel meat tastes like coarse beef, but older camels can prove to be very tough and less flavorful.

Camel meat is low in fat, and can thus taste dry. The Abu Dhabi Officers' Club serves a camel burger, as this allows the meat to be mixed with beef or lamb fat, improving both the texture and taste. In Karachi, Pakistan, the exclusive Nihari restaurants prepare this dish from camel meat, while the general restaurants prepare it with either beef or meat from the water buffalo.

Camel meat has been eaten for centuries. It has been recorded by ancient Greek writers as an available dish in ancient Persia at banquets, usually roasted whole. The ancient Roman emperor Heliogabalus enjoyed camel's heel. Camel meat is still eaten in certain regions, including Somalia, where it is called hilib geel, Saudi Arabia, Egypt, Libya, Sudan, Kazakhstan and other arid regions where alternative forms of protein may be limited or where camel meat has had a long cultural history.

In the Middle East, camel meat is the rarest and most prized source of pastırma.[citation needed] In addition to the meat, the blood can also be consumed. In northern Kenya camel blood is an important source of iron, vitamin D, salts and minerals. Camel meat is also occasionally found in Australian cuisine, including a camel lasagne served in Alice Springs restaurants.

A 2005 report, issued jointly by the Saudi Ministry of Health and the United States Centers for Disease Control and Prevention, details cases of human bubonic plague resulting from the ingestion of raw camel liver.[7]

According to Jewish tradition, camel meat and milk are not kosher. Camels possess only one of the two kosher criteria; although they chew their cuds, they do not possess cloven hooves. (See: Taboo food and drink) 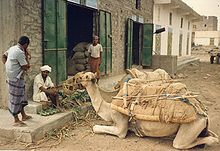 Dromedaries in the Negev, Israel

Around the second millennium BC, camels had become established in the Sahara region, but they disappeared again from around 900 BC. The Persian invasion of Egypt under Cambyses in 525 BC introduced domesticated camels to the area. Domesticated camels were used through much of North Africa, and the Romans maintained a corps of camel warriors to patrol the edge of the desert. The Persian camels, however, were not particularly suited to trading or travel over the Sahara; rare journeys made across the desert were made on chariots pulled by horses.

Stronger and more durable breeds of dromedaries first arrived in Africa in the fourth century. These camels became common after the Islamic conquest of North Africa. While the invasion was accomplished largely on horseback, the new links to the Middle East allowed camels to be imported en masse. These camels were well-suited to long desert journeys and could carry a great deal of cargo, allowing substantial trade over the Sahara for the first time. 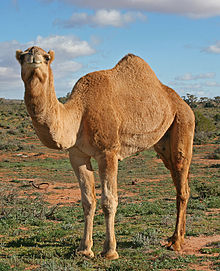 Dromedary on a farm in Australia

In 1840, six camels were shipped from Tenerife to Adelaide, but only one survived the trip, arriving on October 12, 1840. The explorer John Horrocks was among the first to use camels to explore the arid interior of Australia during the 1840s. About a million feral camels are estimated to live in Australia,[citation needed] descendants of domesticated camels that were released or ran away on their own.

The dromedary is the provincial animal (unofficial) of Pakistan's Balochistan provincial region.[8]