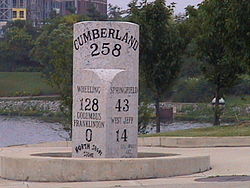 A mile marker on the U.S. National Road giving distances from many places 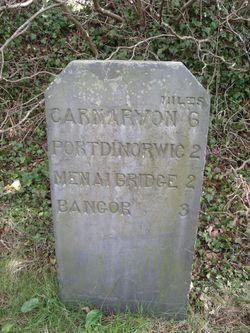 A milestone is one of a series of numbered markers placed along a road or boundary at intervals of one mile or occasionally, parts of a mile. They are typically located at the side of the road or in a median. They are alternatively known as mile markers, mileposts or mile posts (sometimes abbreviated MPs). Mileage is the distance along the road from a fixed commencement point.

Milestones are constructed to provide reference points along the road. This can be used to reassure travellers that the proper path is being followed, and to indicate either distance travelled or the remaining distance to a destination. Such references are also used to by maintenance engineers and emergency services to direct them to specific points where their presence is required. This term is sometimes used to denote a location on a road even if no physical sign is present. This is useful for accident reporting and other record keeping (e.g., "an accident occurred at the 13 mile mark" even if the road is only marked with a stone once every 10 miles). 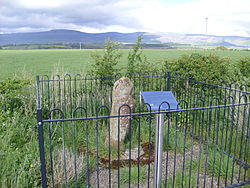 Milestones were originally stone obelisks – made from granite, marble, or whatever local stone was available – and later concrete posts. They were widely used by Roman Empire road builders and were an important part of any Roman road network: the distance travelled per day was only a few miles in some cases.[citation needed] Many Roman milestones only record the name of the reigning emperor without giving any placenames or distances.[1] The first Roman milestones appeared on the Appian way. At the centre of Rome, the "Golden Milestone" was erected to mark the presumed centre of the empire: this milestone has since been lost. The Golden Milestone inspired the Zero Milestone in Washington, D.C., intended as the point from which all road distances in the United States should be reckoned.

A fragment of the Milion re-erected as a pillar.

A mile-marker monument, the Milion, was erected in the early 4th century AD in Constantinople. It served as the starting point for measurement of distances for all the roads leading to the cities of the Byzantine Empire, and had the same function as the Milliarium Aureum of Ancient Rome. The Milion survived intact until at least the late 15th century. Its fragments were discovered again in the late 1960s. A fragment is re-erected as a pillar.

In Europe, the distance measured typically starts at specified point within a city or town, as many roads were named for the towns at either end. For example in London, United Kingdom, a plaque near the Eleanor cross at Charing Cross is the reference point from which distances from London to other towns and cities are measured. In the UK, milestones are especially associated with former Turnpike roads. 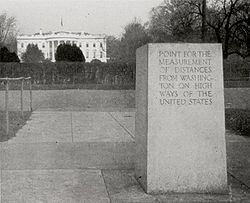 The historical term milestone is still used today, even though the "stones" are typically metal[citation needed] signs and in most countries are based on metric rather than imperial units of measure. Also found today are more closely spaced signs containing fractional numbers, and signs along railways, beaches and canals.

In the U.S. Interstate Highway System, the numbers usually measure the distance to the southern or western state line, while other highways use the county line as the benchmark.[citation needed] Often, the exits are numbered according to the nearest milepost, known as the mile-log system. Some historic and scenic routes – such as along the Blue Ridge Parkway in North Carolina and Virginia and the Overseas Highway of the Florida Keys – use mileposts to mark points of interest.

Milestones on Indian highways typically have white backgrounds with yellow tops (on national highways) or green tops (on state highways). The names of cities and distances are painted in black. The names of the nearest towns and cities are written along with distance in kilometres. On undivided highways, both sides of the milestones are used, telling the distance to the nearest cities in each direction. The highway number is written on the head of the milestone. The sum of the distances of two nearest cities in each direction from the milestone is listed on the side.

Milestones in Zimbabwe are still actual stones placed on roadsides and painted white with black markings highlighting the particular distance (in kilometres)[2] |of the landmark from the closest city hall. Given the small size of the country, there is no distinction between state and national road-sign markings.

Metrication in Australia caused the former mile markers to be gradually replaced with 10 km markers on highways and country roads, and even these have been removed from most major highways with distances to several towns ahead being shown on signboards. Some mile markers are retained as curiosities (see gallery).

Although British road signs give distances in miles,British motorways have been marked out in kilometers since the 1980s.[3] Plastic marker posts are installed at 100 m (approximately 5 chain) intervals. Since the advent of the mobile phone, much larger driver location signs have been erected to assist drivers when calling the emergency services. 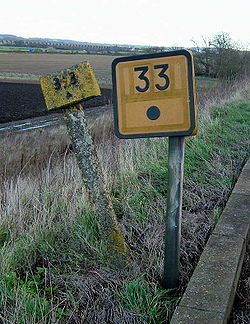 Old and new railway mileposts in the UK, indicating a distance of 33¼ miles from the zero point

In 1845, the Railways Clauses Consolidation Act[4] was passed, compelling UK railway companies to provide their passengers with a means of determining the distance traveled (fares were set by distance at this time). Section 94 states:

"The company shall cause the length of the railway to be measured, and milestones, posts, or other conspicuous objects to be set up and maintained along the whole line thereof, at the distance of one quarter of a mile from each other, with numbers or marks inscribed thereon denoting such distances."[5]

Similar laws were passed in other countries. On the modern railway, these historical markers are still used as infrastructure reference points. At many points, the distances shown on the markers are based upon points no longer on the network – for example, distances measured via a closed line or from a junction which has subsequently been moved. Whole mileposts are usually supplemented by half and quarter posts. Structure signs often include the mileage to a fair degree of precision; in the UK, a chain is the usual accuracy. In the U.S. and Canada, miles are "decimalized", so that, for example, there may be a "milepost 4.83" to mark a junction or crossing.

In metricated areas, the equivalent is the "point kilométrique".

Surveyors place milestones to mark the boundaries between the jurisdictions separated by borders. A series of such boundary markers exists at one mile (1.6 km) intervals along the borders of the District of Columbia in the United States.