Some central reservations function secondarily as green areas and green belts to beautify roadways. Jurisdictions can: plant lawn grasses with regular mowing; hydroseed or scatter wildflower seeds to germinate, bloom, and re-seed themselves annually; or create extensive landscape plantings of trees, shrubs, herbaceous perennials and ornamental grasses. Where space is at a premium, dense hedges of shrubs filter the headlights of oncoming traffic and provide a resilient barrier.

A California arterial road median with rocks set in it.

In contrast to the central reservation of a major road, those in urban areas often take the form of central traffic islands that rise above the roadway. These are frequently found on urban arterial roads. In their simplest form, these are just raised concrete curbs, but can also be landscaped with grass or trees or decorated with bricks or stones. Such central reservations are also sometimes found on more minor or residential streets, where they serve primarily as a traffic-calming or landscaping element rather than a safety enhancement to restrict turns and separate opposite directions of high-volume traffic flow.

In some areas, such as California, highway medians are sometimes no more than a reserved central section of the paved roadway, indicated by a space between two sets of double-yellow lines. Similar to an island median, vehicles are only permitted to cross at designated locations. This arrangement has been used to reduce costs, including narrower medians than are feasible with a planted strip, but research indicates that such narrow medians may have minimal safety benefit compared to no median at all.[2] 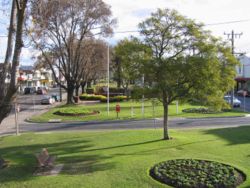 The wide median strip in Main St, Bairnsdale, Victoria, Australia has been made into a garden feature of the town.

The central reservation in the United Kingdom and other densely populated European countries is usually no wider than a single lane of traffic. In some cases, however, it is extended. For instance, if the road is running through hilly terrain, the carriageways may have to be built on different levels of the slope. Two examples of this on the UK road network are on a section of the M6 between Shap and Tebay, where the carriageways are several hundred yards apart, which allows a local road to run between them, and on the M62 where the highest section through the Pennines famously splits wide enough for a farm in the central reservation.[3] The other major exception is the A38(M) Aston Expressway, which is a single carriageway of seven lanes, where the median lane moves to account for traffic flow (a system known as tidal flow).

In North America, and some other countries with large sparsely populated areas, opposing lanes of traffic may be separated by several hundred meters of fields or forests outside of heavily populated areas (an extreme example being the Trans-Canada Highway near Ernfold, Saskatchewan, Canada, where eastbound and westbound lanes go as far as 5km apart from each other), but converge to a lane's width in suburban areas and cities. In urban areas, concrete barriers (such as Jersey barriers) and guard rails (or guide rails) are used. 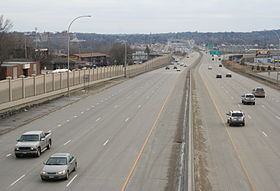 The raised concrete median can be seen dividing U.S. Route 52 in Rochester, Minnesota.

One median of note is the inverted median of the Golden State Freeway (I-5) in the Tehachapi Mountains between Los Angeles, California and the San Joaquin Valley. For several miles, the median is inverted—northbound traffic is on the western roadway and southbound traffic on the eastern road. A similar example exists in western Montreal, on the Autoroute 20, between the Route 138 and the Turcot Interchange, where the two directions, on opposite sides of a railway, are reversed (and one enters or exits via the left side). Similarly, I-85, in central North Carolina, features an inverted median so that an in-median, right-exit rest area can feature a historic bridge. 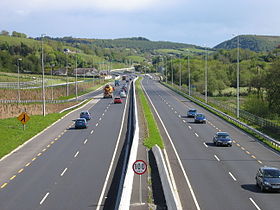 Concrete median barrier on the N11 road near Dublin, Ireland.

An August 1993 study by the U.S. Federal Highway Administration quantified the correlation between median width and the reduction of both head-on accidents and severe injuries. The study found that medians without barriers should be constructed more than 30 feet (9.1 m) in order to have any effect on safety, and that safety benefits of medians increase to a width of 60 to 80 feet (18.3 to 24.4 m). A consequence of this finding is that decreasing the size of a median to 20 feet (6.1 m) from 30 feet (9.1 m) to add lanes to a highway may result in a less safe highway. Statistics regarding medians with barriers were not calculated in this study.[2]