The Society of Mary (Marists), is a Roman Catholic religious congregation or order, founded by (later) Father Jean-Claude Colin and a group of other seminarians in France in 1816. Jean-Claude Courveille (1787–1866) had the original insight for the congregation but it was brought to fruition by Colin.

By the beginning of the 19th century Christian churches were well established in the Americas, Europe, and Australia. Christian evangelization efforts turned to Africa, Asia and Oceania. The Holy See, keen to get the Catholic faith established in this area entrusted its evangelization efforts of Oceania to two religious congregations. The Vicariate Apostolic of Eastern Oceania (including Tahiti, the Marquesas and Hawaii) was assigned to the Congregation of the Sacred Hearts of Jesus and Mary (Picpus Fathers). Similarly, the Vicariate Apostolic of Western Oceania (including Micronesia, Melanesia, Fiji, New Zealand, Samoa, and Tonga), was assigned to the Society of Mary (Marists). The Society's members include two canonized saints, Saint Peter Chanel, S.M., martyred on the island of Futuna and Saint Marcellin Champagnat, S.M., founder of the Marist Brothers. The society's name derives from the Blessed Virgin Mary whom the members attempt to imitate in their spirituality and daily work.

The first idea of a "Society of Mary" originated in 1816 in Lyon, France, with a group of seminarians, who saw in the 1815 restoration of the Bourbon Dynasty an opportunity for evangelisation, but the real founder was Jean-Claude Colin, the most retiring of the group. Later at Cerdon, where he was pastor, he began drafting a tentative rule and founding the Sisters of the Holy Name of Mary; Saint Marcellin Champagnat, another of the group, established at Lavalla-en-Gier the Little Brothers of Mary. Because of the cool reception they received from the ecclesiastical authorities in Lyon, the foundation of the missionary priests' branch could not be made until Cerdon, Colin's parish, passed from the jurisdiction of Lyon Diocese to that of Belley. In 1823, Bishop Devie of the newly restored Diocese of Belley authorised Colin and a few companions to resign their parish duties and form into a missionary band for the rural districts. Their zeal and success in that difficult work moved the bishop to entrust them also with the conduct of his seminary, thus enlarging the scope of their work. However, the fact that Bishop Devie wanted a diocesan institute only, and that Fr. Colin was averse to such a limitation, came near placing the nascent order in jeopardy when Pope Gregory XVI, in quest of missionaries for Oceania, by Brief of April 29, 1836, approved definitively the "Priests of the Society of Mary" or Marist Fathers, as a religious institute with simple vows and under a Superior General. The Little Brothers of Mary and the Sisters of the Holy Name of Mary, commonly called Marist Brothers and Marist Sisters, were reserved for separate institutes. Father Colin was elected Superior General on September 24, 1836, and on that same day the first Marist professions took place, Saint Peter Chanel, Colin, and Saint Marcellin Champagnat being among those professed. 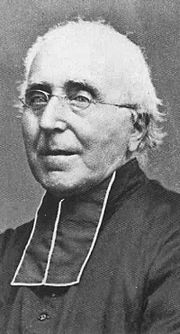 Venerable Jean-Claude Colin, Founder of the Society of Mary

From its definitive organisation the Society of Mary developed along the various lines of its constitutions in and out of France. In France it did work in the mission field in various centres. When educational liberty was restored to French Catholics, it also entered the field of secondary, or college education, its methods being embodied in Montfat's "Théorie et pratique de l'education chrétienne" (Paris, 1880), and moreover assumed the direction of a few diocesan seminaries together with professorships in Catholic institutes for higher education. The French province also supplied men for the various missions undertaken abroad by the Society of Mary.

Outside France, their first field of labour was the Vicariate Apostolic of Western Oceania, comprising New Zealand, Tonga, Samoa, the Gilbert (now known as Kiribati) and Marshall Islands, Fiji, New Caledonia, New Guinea, the Solomon and the Caroline Islands. Under the vicar apostolic, Bishop Jean Baptiste Pompallier, who took up residence in New Zealand, the Marists successively moved to Wallis in 1837, soon converted by Father Pierre Bataillon; Futuna in 1837, the place of Saint Pierre Chanel's martyrdom; Tonga in 1842, New Caledonia in 1843, where Bishop Douarre, Pompallier's coadjutor, met untold difficulties and Brother Blaise was massacred; and, in spite of much Protestant opposition, Fiji in 1844 and Samoa in 1845. The immense area of the vicariate, together with the presence at its head of a diocescan bishop, soon necessitated the creation of smaller districts under Marist bishops: Central Oceania under Bishop Bataillon (1842), Melanesia and Micronesia under Bishop Epalle (1844), New Caledonia under Bishop Douarre (1847), Wellington (New Zealand) under Bishop Viard (1848), Bishop Pompallier retaining Auckland; the Navigator Islands (1851), long administered by the Vicar Apostolic of Central Oceania; the Prefecture of Fiji (1863), etc. Of these, Melanesia and Micronesia had to be abandoned after the massacre of Bishop Epalle at Isabella Island and the sudden death of his successor, Bishop Colomb, the Solomon Islands alone reverting to the Marists in 1898. Those various missions have progressed steadily under the Marist Fathers who, beside their religious work, have largely contributed to make known the languages, fauna, and flora of the South Sea Islands. The growth of New Zealand has been such as to call for a regular hierarchy, and the Marists were concentrated (1887) in the Roman Catholic Archdiocese of Wellington and the Roman Catholic Diocese of Christchurch that were still governed by members of the order. 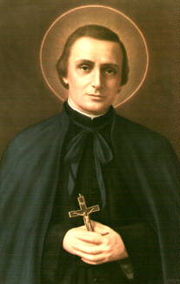 The Society of Mary was founded in a time of great turmoil and difficulty for the French clergy and religious institutions. In this time of unrest arose a strong notion of eschatology within circle of the seminarians that would became the first Marists. It was in this atmosphere that the Marian maxim "I (Mary) was the mainstay of the new-born Church; I shall be again at the end of time" began to circulate. The early Marists saw themselves as the ones to live and minister under Mary's name. That was the core of the spiritual understanding of what they saw as their vocation.

Marist spirituality is largely based on the vision of Jean-Claude Colin. A phrase that was central to his understanding of religious life was "Ignoti et quasi occulti in hoc mundo", hidden and even unknown in this world. For Colin this sentence is exemplary for the way Mary lived the Gospel in a humble, modest and simple way. The Marists are called to imitate Mary in this way of life and ministry. Colin said Marists must "...think as Mary, judge as Mary, feel and act as Mary in all things.".

Colin called the missionary and pastoral activity of the Marists the "Work of Mary". According to Marist tradition the Society of Mary as a whole and every individual Marist is called to be an "Instrument of Mercy" for all mankind. As Mary was a healing presence in the Early Church so the Marists want to be present in the Church of their days.

The Irish historian, Brendan Bradshaw, is a Marist Father. His decision to join the religious order opened up opportunities for further studies and he then took his first degree at University College, Dublin. It was at this point he moved to Cambridge and undertook graduate research with Sir Geoffrey Elton. He was a graduate student at Corpus Christi and then had the good fortune to be elected to a Research Fellowship at St John's.

Appointment to a University Lectureship followed at Queen's College, Cambridge, in due course. Certain themes recur in Bradshaw's work: the importance of history and experience for identity, particularly in Ireland; the inadequacies of whig history; the importance of thorough documentary analysis as the only basis for decent history, although this is coupled with an awareness of the value of literary sources for the historian. For Bradshaw, the historian, like any other intellectual, has a duty to communicate with society. 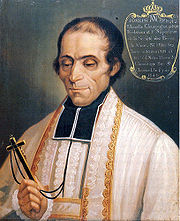 In Great Britain, the Marist foundations began as early as 1850 at the request of Cardinal Nicholas Wiseman, Archbishop of Westminster, but have not grown beyond three colleges and five parishes. In the United States, the Society of Mary has taken a firmer hold. From Louisiana, whither Archbishop Odin called them in 1863 to take charge of a French parish and college, the Marists have passed into eleven states and even branched off into Mexico, and, although continuing to minister to a number of French speaking communities, they have not limited their action there, but gradually taken up other ministries and apostolates. The Lourdes Center in Boston Massachusetts was established in 1950 by Cardinal Richard J. Cushing and Bishop Pierre-Marie Theas to distribute Lourdes water in the United States. It is operated by the Marists of the USA Province.

Today the Society which has a General Administration in Rome operates in 7 Provinces: Australia, Canada, Europe, Mexico, New Zealand, Oceania, USA and in four mission districts: Africa (Senegal and Cameroun), Brazil, Peru-Venezuela and the Philippines. The European Provinces, Districts and Delegations (England, Ireland, France, Germany, Italy, the Netherlands, Spain) reconfigured in 2008 and formed a new province, Europe. The Provinces in the United States (Atlanta and Boston) became one Province (USA) on 1 January 2009. There are around 1000 Marists worldwide. While the provinces and districts named are often countries Marists also work in countries which are not named including many Pacific countries, Japan, Thailand and Norway.