The School of International and Public Affairs (SIPA) at Columbia University is one of the most prestigious graduate schools of public policy in the world. Located on Columbia's Morningside Heights campus in the Borough of Manhattan, in New York City, the School has 15,000 graduates in more than 150 countries. Half of SIPA’s nearly 1,200 students are international, coming from 100 countries. They are enrolled in the traditional two-year programs, one of the three intense accelerated full-degree programs, in the mid-career executive program in public administration, or in one of several dual degree programs with international schools such as the London School of Economics and Political Science, the Institut d'Études Politiques de Paris (Sciences Po), the Hertie School of Governance in Berlin, and the Lee Kuan Yew School of Public Policy at the National University of Singapore.[1] 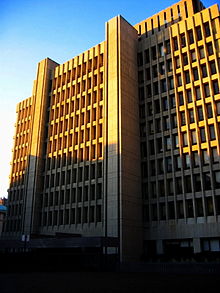 The School of International and Public Affairs is located at 420 West 118th Street, just off Amsterdam Avenue on Columbia University's Morningside Heights campus in Manhattan.

Columbia University's School of International Affairs was founded in 1946, in the aftermath of World War II. Emphasizing practical training, the mission of the School was to foster understanding of regions of vital interest and to prepare diplomats, officials, and other professionals to meet the complexities of the postwar world. It originated in dynamic regional institutes that, with an interdisciplinary vision bold for its day, drew on Columbia's renowned faculties in history, economics, political science, linguistics, and other traditional fields. The School awarded a Master of International Affairs (MIA) degree.

To meet a growing demand for skilled public service professionals at home as well as abroad, in 1977 the School added a second degree, the Master of Public Administration. In 1981, the program was renamed the Graduate Program in Public Policy and Administration and the School renamed the School of International and Public Affairs (SIPA). With its principal degree programs firmly established, SIPA added functional concentrations to both the MIA and MPA in response to emerging areas of need and professional opportunity—from international finance to urban policy, from human rights to environmental policy.

In the early 1990s, SIPA began appointing its own faculty, supplementing the distinguished social and natural scientists and humanists with whom SIPA students studied around the University. Within 15 years, SIPA faculty were among the most prominent in their fields, including the one-time director of the U.S. census, a Nobel Laureate in Economics, a judge on the appellate body of the World Trade Organization, economic advisors in both the Bill Clinton and George H. W. Bush administrations, a former assistant secretary general of the United Nations, and many distinguished research scholars.

SIPA has continued to evolve, adding programs that mirror a globalized world in which the boundaries between international and public affairs, like the boundaries between states, have grown less distinct. In 1992, with support from the World Bank, The Program in Economic Policy Management (PEPM) was established to provide mid-career finance professionals with the skills required for effective design and implementation of economic policy, emphasizing the problems of developing and transition economies. Students who complete PEPM’s requirements are awarded an MPA degree.

One of the School's most notable initiatives over the years has been the International Fellows program which has given the best graduate students in the various schools at Columbia an immersion into international affairs in a one academic year program of seminars and networking events with high level international affairs practitioners. The program has a distinguished list of alumni which include a former Deputy Secretary of State,a Nobel Laureate, a Fortune 100 CEO and a prestigious national news magazine editor.

To accommodate the needs of working professionals who could not pursue full-time study, SIPA established the Executive MPA program in 1999 as part of the Picker Center for Executive Education. In 2001 the School introduced an MPA in Environmental Science and Policy (ESP), which condenses the usual two years of intermittent study (including a summer break) into twelve consecutive months, without a reduction in requirements, and provides core courses in management and policy analysis with a concentration in environmental science and earth systems. The ESP MPA program is offered in cooperation with The Earth Institute and the Lamont-Doherty Earth Observatory. In fall 2004 SIPA inaugurated its first doctoral program, the interdisciplinary Ph.D. in Sustainable Development, which combines elements of a traditional graduate education in social science, particularly economics, with a significant training in the natural sciences.

In addition, SIPA has established a Global Public Policy Network with the London School of Economics (LSE), the Institut d'Etudes Politiques de Paris (often referred to as "Sciences Po") and the Hertie School of Governance, as well as a variety of other collaborations with public policy programs at the Universidad Externado de Colombia in Bogotá, Renmin University in Beijing and other universities in Europe and Asia. SIPA also offers non-degree training programs in its home city of New York and around the world through the Picker Center for Executive Education. A history of the School written in 1954 boasts that students came from six countries outside the United States and that graduates were working in 17 different countries. The class of 2005 came from over a hundred countries, and the School’s 11,000 alumni are working in 155 countries.

Most students are at SIPA for two years or less. Many activities are centered around interest-driven student groups, student government (School of International and Public Affairs Student Association, known as SIPASA), the student newspaper "Communiqué," the student-edited policy journal "Journal of International Affairs" and a number of ad hoc athletic groups and intramural athletic leagues.

The Student Association (SIPASA)is led by an Executive Board chaired by MPA and MIA Co-Presidents. The following positions comprise the rest of the Executive Board: Vice President of Communications, ESP-MPA President, PEPM-MPA President, Treasurer, EMPA Representative and University Senator. Each program, MPA/MIA/ESP-MPA/PEPM-MPA, has seven functional chairs that serve student interests ranging from career services and alumni affairs to student life and academics. [2]

Communiqué - Communiqué is a student-written, student-run newspaper of Columbia University’s School of International and Public Affairs. The editors are solely responsible for its content.

SIPA News - The School of International and Public Affairs’ biannual publication featuring articles by faculty, students and alumni as well as current news about SIPA’s programs, events and alumni.

The Morningside Post is SIPA's student-founded, student-run blog. Students, faculty and alumni contribute posts ranging from coverage of SIPA events to personal accounts of their work in international and public affairs to commentary on current affairs and life at Columbia.