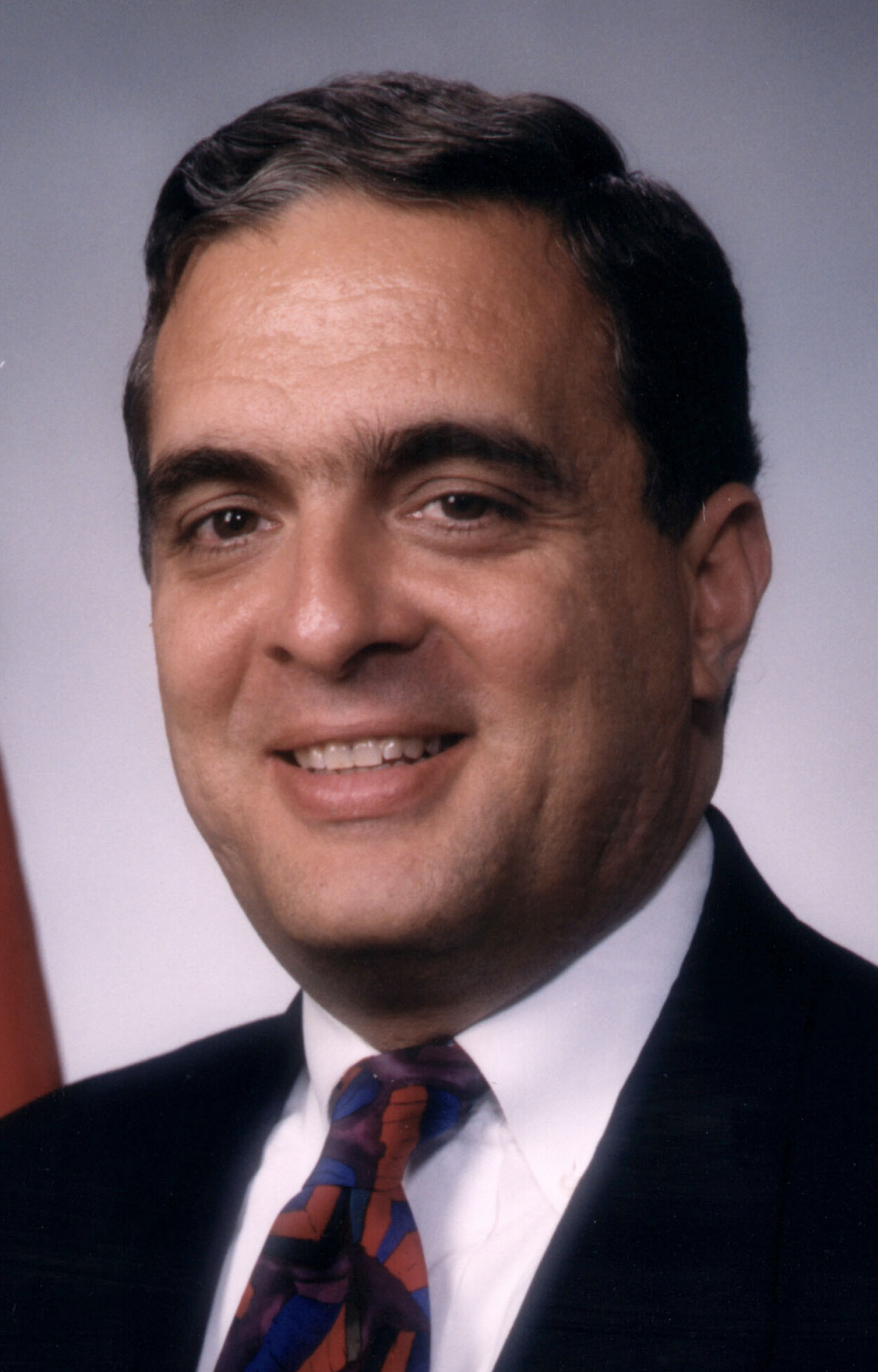 George John Tenet (born , ) was the for the and is Distinguished Professor in the Practice of Diplomacy at . Tenet held the position as the DCI from July 1997 to July 2004, making him the second-longest serving director in the agency's history — behind — as well as one of the few DCIs to serve under two U.S. presidents of opposing political parties.

Tenet is married to Stephanie Glakas-Tenet. They have one son, John Michael. [ [http://www.usnews.com/usnews/news/articles/040614/14cia.b.htm The George Tenet story - US News and World Report ] ]

After he received his M.A., Tenet became research director of the from 1978 to 1979. [ [http://hellenicnews.com/readnews.html?newsid=1648&lang=US Hellenic News of America ] ] He then began working for the Senate, first as a legislative assistant and later as Legislative Director to former Senator of (1982-1985). He was a staff member of the Senate Select Committee on Intelligence (SSCI) from 1985-1988, then Staff Director of the SSCI from 1988-1993. Later, Tenet joined President-elect 's national security transition team. Clinton appointed Tenet Senior Director for Intelligence Programs at the National Security Council (1993-1995). [ [http://www.usatoday.com/news/washington/2002-10-09-tenet_x.htm USATODAY.com - CIA director's allies outrank his enemies ] ] [http://www.militaryfactory.com/generals/george_tenet.asp]

Tenet was appointed Deputy Director of Central Intelligence in July 1995. After John Deutch's abrupt resignation in December 1996, Tenet served as acting director. This was followed by the withdrawal of , whose nomination had been blocked by Republicans in Congress. Tenet was then officially appointed Director on , , after a unanimous confirmation vote in the Senate. While the Director of Central Intelligence has typically been replaced by an incoming administration ever since replaced DCI , Tenet served through the end of the Clinton administration and well into the term of .

Tenet embarked on a mission to regenerate the CIA, which had fallen on hard times since the end of the Cold War. The number of agents recruited each year had fallen to an all-time low, a 25-percent decline from the peak. Tenet appealed to the original mission of the agency, which had been to "prevent another Pearl Harbor". The trick was to see where danger might come from in the post-Cold War world. Tenet focused on potential problems such as "the transformation of Russia and China", "rogue states" like North Korea, Iran and Iraq, and terrorism. [Steve Coll, "Ghost Wars" (Penguin, 2005 edn), pp.317, 354, 359-62.]

Al-Qaeda and the War on Terror

By 1999 had emerged as a significant terrorist threat. The 1998 bombings of two US African embassies were the latest in a string of attacks on American interests in the west Indian-Ocean region. And in 2000 the USS Cole was bombed in in an attempt to sink her, killing 17 naval personnel.

In 1999 Tenet put forward a grand "Plan" for dealing with al-Qaeda. In preparation, he selected new leadership for the CIA's (CTC). He placed in charge of the CTC, and "Rich B" (a "top-flight executive" from Tenet's own suite) in charge of the CTC's Bin Laden unit. Tenet assigned the CTC to develop the Plan. The proposals, brought out in September, sought to penetrate Qaeda's "Afghan sanctuary" with US and Afghan agents, in order to obtain information on and mount operations against Bin Laden's network. In October, officers from the Bin Laden unit visited northern . Once the Plan was finalized, the Agency created a "Qaeda cell" (whose functions overlapped those of the CTC's Bin Laden unit) to give operational leadership to the effort.

The CIA also experimented with a small remote-controlled reconnaissance aircraft, the Predator, to try to spot Bin Laden in . A series of flights in autumn 2000, overseen by CTC officials and flown by USAF drone pilots from a control room at the CIA's Langley headquarters, produced probable sightings of the al-Qaeda leader. [Coll, "Ghost Wars", pp.527, 532; "9/11 Commission Report", [http://www.9-11commission.gov/report/911Report_Ch6.pdf chapter 6] , pp.189-90 ( [http://www.9-11commission.gov/report/911Report_Ch6.htm HTML version] )] Black and others became advocates of arming the Predator with adapted Hellfire anti-tank missiles to try to assassinate Bin Laden and other Qaeda leaders. But there were both legal and technical issues. Tenet in particular was concerned about the CIA moving back into the business of assassination. And a series of live-fire tests in the Nevada Desert in summer 2001 produced mixed results.

In late 2000 Tenet, recognizing the deficiency of "big-picture" analysis of al-Qaeda, appointed a senior manager in the to investigate "creating a strategic assessment capability". In spring 2001 the CTC got back to him, requesting the hiring of "a small group of contractors not involved in day-to-day crises to digest vast quantities of information and develop targeting strategies".

After the , many observers criticized the Intelligence Community for numerous "s" as one of the major reasons why the attacks were not prevented.

Tenet considered that his Qaeda plan had placed the CIA in a better position to respond after the 9/11 attacks. As he put it,

How could [an intelligence] community without a strategic plan tell the president of the United States just four days after 9/11 how to attack the Afghan sanctuary and operate against al-Qa'ida in ninety-two countries around the world? [Tenet, "At the Center of the Storm", pp.121-2; cf. p.178.]

This was at a meeting of the restricted National Security Council -- or "war council" -- at on , . Tenet presented the , a blueprint for what became known as the War On Terror. He proposed firstly to send CIA teams into Afghanistan to collect intelligence on, and mount covert operations against, al-Qaeda and the . The teams would act jointly with military Special Operations units. "President Bush later praised this proposal, saying it had been a turning point in his thinking." ["9/11 Commission Report", [http://www.9-11commission.gov/report/911Report_Ch10.pdf chapter 10] , p.332 ( [http://www.9-11commission.gov/report/911Report_Ch10.htm HTML version] )]

Use of Water Boarding

According to a report by veteran investigative journalist in his book "", Tenet privately lent his personal authority to the intelligence reports about (WMDs) in . [cite web
title=Woodward vs. Tenet: The New Intelligence War
first=Jeffrey
last=Goldberg
publisher=The New Yorker
url=http://www.newyorker.com/reporting/2007/05/21/070521fa_fact_goldberg?printable=true
date=2007-05-21
accessdate=2008-02-06|] At a meeting on , , he assured Bush that the evidence against amounted to a " case." After several months of refusing to confirm this statement, Tenet later stated that this remark was taken out of context. (Tenet indicated that the comment was made pursuant to a discussion about how to convince the American people to support invading Iraq, and that, in his opinion, the best way to convince the people would be by explaining the dangers posed by Iraq's WMD i.e., the public relations sale of the war via the WMD, according to Tenet, would be a "slam dunk"). [ [http://www.nytimes.com/2007/04/27/washington/27intel.html?ex=1335326400&en=e6f2a5232d75afb5&ei=5090&partner=rssuserland&emc=rss Ex-C.I.A. Chief, in Book, Assails Cheney on Iraq - New York Times ] ] The search following the by U.S., British and international forces yielded no stockpiles of WMDs, however.

Citing "personal reasons," Tenet submitted his resignation to President Bush on , . , his Deputy Director for Operations at the CIA, announced his resignation the following day, leading to speculation that the exit of both senior intelligence officials was related to the controversy over alleged Iraqi WMDs and the decision to go to war. Admiral , director of the CIA under President , said, "I think the president feels he's in enough trouble that he's got to begin to cast some of the blame for the morass that we are in Iraq on to somebody else and this was one subtle way to do it." ("", , ) However, Bush voiced support for Tenet's efforts, stating, "George Tenet did a superb job for America. It was a high honor to work with him, and I'm sorry he left." ("", , )

Awarded the Presidential Medal of Freedom

Tenet's seven-year term as Director of Central Intelligence was the second-longest in U.S. history. On , , President Bush awarded Tenet the . This was a decision that some senior Democrats questioned, citing intelligence failures to find WMDs in Iraq.

In April 2007 Tenet released his titled "". He appeared on "" on , making several accusations against the Bush administration. The book was the top-selling book in sales in the first week after publication. It has received some discussion in the media from former government officials.

Critics pointed out a major factual error in Tenet's book. On the book's first page, Tenet tells of a conversation with then-Pentagon advisor on , in which Tenet claims Perle told him in person that "Iraq had to pay for the attack." But the conversation could not have occurred on that day, because Perle was stranded in , on September 12 and didn't return to Washington until three days later.

In an interview with 's during an episode of "" Perle admitted that the two men indeed crossed each other one morning, as claimed by Tenet, but only later in the same week and not on September 12. But Perle insisted that he and Tenet exchanged no words in that encounter. [cite news | author = Associated Press | title = Tenet Memoir Draws Heat From Key Players | url = http://www.losangeleschronicle.com/articles/viewArticle.asp?articleID=25702 | accessdate = 2007-04-30]