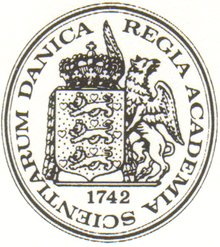 Logo of the Royal Danish Academy of Sciences and Letters

Royal Danish Academy of Sciences and Letters (Danish: Kongelige Danske Videnskabernes Selskab) is a Danish non-governmental science Academy, founded 13 November 1742 by permission of the King Christian VI, as a historical Collegium Antiquitatum. It was founded by secretary of state, Count Johan Ludvig Holstein and the history professor Hans Gram.

Members of the Academy are researching, lecturing and publishing in nearly all fields of science. The Academy has approximately 250 national and 260 foreign members.