Magnus Hirschfeld (May 14, 1868 - May 14, 1935) was a German physician and sexologist. An outspoken advocate for sexual minorities, Hirschfeld founded the Scientific Humanitarian Committee, which Dustin Goltz called "the first advocacy for homosexual and transgender rights."[1]

Hirschfeld was born in Kolberg (modern Kołobrzeg) in a Jewish family, the son of a highly regarded physician and 'Medizinalrat' Hermann Hirschfeld. In 1887-1888 he studied philosophy and philology in Breslau, then from 1888-1892 medicine in Strasbourg, Munich, Heidelberg, and Berlin. In 1892 he took his doctoral degree. After his studies, he traveled through the United States for eight months, visiting the World's Columbian Exposition in Chicago, and living from the proceeds of his writing for German journals. Then he started a naturopathic practice in Magdeburg; in 1896 be moved his practice to Berlin-Charlottenburg.

Magnus Hirschfeld's career successfully found a balance between medicine and writing. After several years as a general practitioner in Magdeburg, in 1896 he issued a pamphlet Sappho and Socrates, on homosexual love (under the pseudonym Th. Ramien). In 1897, Hirschfeld founded the Scientific Humanitarian Committee with the publisher Max Spohr, the lawyer Eduard Oberg, and the writer Max von Bülow. The group aimed to undertake research to defend the rights of homosexuals and to repeal Paragraph 175, the section of the German penal code that since 1871 had criminalized homosexuality. They argued that the law encouraged blackmail, and the motto of the Committee, "Justice through science", reflected Hirschfeld's belief that a better scientific understanding of homosexuality would eliminate hostility toward homosexuals.

Within the group, some of the members scorned Hirschfeld's analogy that homosexuals are like disabled people; they argued that society might tolerate or pity them, but never treat them as equals. They also disagreed with Hirschfeld's (and Ulrichs's) view that male homosexuals were by nature effeminate. Benedict Friedlaender and some others left the Scientific-Humanitarian Committee and formed another group, the 'Bund für männliche Kultur' or Union for Male Culture, which did not exist for long. It argued that male-male love is a simple aspect of virile manliness rather than a special condition.

The bill was brought before the Reichstag in 1898, but was only supported by a minority from the Social Democratic Party of Germany, prompting Hirschfeld to consider what would, in a later era, be described as "outing": forcing some of the prominent and secretly homosexual lawmakers who had remained silent out of the closet. The bill continued to come before parliament, and eventually began to make progress in the 1920s before the takeover of the Nazi Party obliterated any hopes for reform.

Hirschfeld was both quoted and caricatured in the press as a vociferous expert on sexual manners, receiving the epithet "the Einstein of Sex". He saw himself as a campaigner and a scientist, investigating and cataloging many varieties of sexuality, not just homosexuality. He developed a system which categorised 64 possible types of sexual intermediary ranging from masculine heterosexual male to feminine homosexual male, including those he described under the word he coined "Transvestit" (transvestite), which covered people who today would include a variety of transgender and transsexual people.

Hirschfeld co-wrote and acted in the 1919 film Anders als die Andern ("Different From the Others"), where Conrad Veidt played one of the first homosexual characters ever written for cinema. The film had a specific gay rights law reform agenda; Veidt's character is blackmailed by a lover, eventually coming out rather than continuing to make the blackmail payments, but his career is destroyed and he is driven to suicide. 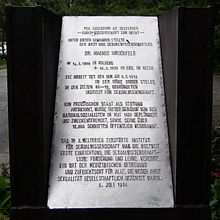 In 1919, under the more liberal atmosphere of the newly founded Weimar Republic, Hirschfeld purchased a villa not far from the Reichstag building for his new Institut für Sexualwissenschaft (Institute for Sexual Research) in Berlin. His Institute housed his immense library on sex and provided educational services and medical consultations. People from around Europe visited the Institute to gain a clearer understanding of their sexuality.

Christopher Isherwood writes about his and W. H. Auden's visit to the Institute in his book Christopher and His Kind. They were visiting Francis Turville-Petre, a friend of Isherwood's who was an active member of the Scientific Humanitarian Committee. The Institute also housed the Museum of Sex, an educational resource for the public which is reported to have been visited by school classes.

The Institute and Hirschfeld's work are depicted in Rosa von Praunheim's feature film Der Einstein des Sex (The Einstein of Sex, Germany, 1999 - English subtitled version available). Although inspired by Hirschfeld's life, the film is a work of fiction containing numerous invented incidents and attributing motives and sentiments to Hirschfeld and other characters on the basis of little or no historical evidence.

In 1904, Hirschfeld joined the Bund fur Mutterschutz (League for the Protection of Mothers), the feminist organization founded by Helene Stöcker. He campaigned for the decriminalisation of abortion, and against policies that banned female teachers and civil servants from marrying or having children.[further explanation needed] 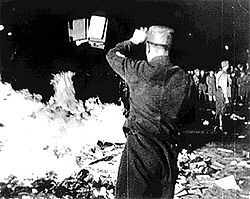 On May 10, 1933, Nazis in Berlin burned works by leftists and other authors considered "un-German," including thousands of books looted from the library of Hirschfeld's Institut für Sexualwissenschaft.

When the Nazis took power, they attacked Hirschfeld's Institut on May 6, 1933, and burned many of its books. The press-library pictures and archival newsreel film of the Nazi book-burning seen today are believed to be of Hirschfeld's library and records.[citation needed]

By the time of the book burning, Hirschfeld had long since left Germany for a speaking tour that took him around the world; he never returned to Germany. Hirschfeld came back to Europe in March 1932, stopping briefly in Athens, then spending several weeks in Vienna before moving on to Zurich in August 1932.[2] While in Switzerland, he worked on a book recounting his experiences and observations from his world tour, published in 1933 as Die Weltreise eines Sexualforschers (Brugg, Switzerland: Bözberg-Verlag, 1933), and subsequently in English translation in the United States under the title Men and Women: The World Journey of a Sexologist (New York City: G. P. Putnam's Sons, 1935) and in England under the title Women East and West: Impressions of a Sex Expert (London: William Heinemann Medical Books, 1935).

Hirschfeld had initially stayed near Germany, hoping to return to Berlin if the political situation improved. With the Nazi regime's unequivocal rise to power and with work on the book about his world tour completed, he decided to establish himself as an exile in France. On his 65th birthday, May 14, 1933, Hirschfeld arrived in Paris, where he would live in a luxurious apartment building at 24 Avenue Charles Floquet, facing the Champ de Mars.[2] A year-and-half later, in November 1934, he moved south to Nice, on the Mediterranean coast.[3] Throughout his stay in France, he continued researching, writing, campaigning and working to reestablish a French successor to his lost institute in Berlin.[2]

The last of Hirschfeld's books released during his lifetime, L'Ame et l'amour, psychologie sexologique (Paris: Gallimard, 1935), was published in French in late April 1935;[4] it was his only book which never appeared in a German-language edition. In the preface, he described his hopes for his new life in France: "In search of sanctuary, I have found my way to that country, the nobility of whose traditions, and whose ever-present charm, have already been as balm to my soul. I shall be glad and grateful if I can spend some few years of peace and repose in France and Paris, and still more grateful to be enabled to repay the hospitality accorded to me, by making available those abundant stores of knowledge acquired throughout my career."[5] 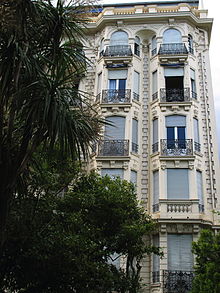 The apartment complex in Nice where Magnus Hirschfeld died on May 14, 1935: Gloria Mansions I at 63, Promenade des Anglais.

On his 67th birthday, May 14, 1935, Hirschfeld died of a heart attack in his apartment at the Gloria Mansions I building at 63 Promenade des Anglais in Nice.[3] His body was cremated, and the ashes interred in a simple but elegant tomb in the Caucade Cemetery in Nice.[2] The headstone in gray granite is inset with a bronze bas-relief portrait of Hirschfeld in profile by German sculptor and decorative artist Arnold Zadikow (1884–1943) and is engraved with Hirschfeld's Latin motto, "Per Scientiam ad Justitiam" ("through science to justice"). (The Caucade Cemetery is likewise the location of the grave of surgeon and sexual-rejuvenation proponent Serge Voronoff — whose work Hirschfeld had discussed in his own publications.)

On May 14, 2010, to mark the 75th anniversary of Hirschfeld's death, a French national organization, the Mémorial de la Déportation Homosexuelle (MDH), in partnership with the new LGBT Community Center of Nice (Centre LGBT Côte d'Azur), organized a formal delegation to the cemetery. Speakers recalled Hirschfeld's life and work and laid a large bouquet of pink flowers on his tomb; the ribbon on the bouquet was inscribed "Au pionnier de nos causes. Le MDH et le Centre LGBT" ("To the pioneer of our causes. The MDH and the LGBT Center").[6]

American Henry Gerber, attached to the Allied Army of Occupation following World War I, became impressed by Hirschfeld and absorbed many of Hirschfeld's ideas. Upon his return to the United States, Gerber was inspired to form the short-lived Chicago-based Society for Human Rights in 1924, the first known gay rights organization in the nation.[7] In turn, a partner of one of the former members of the Society communicated the existence of the society to Los Angeles resident Harry Hay in 1929; Hay would go on to help establish the first long-term national homosexual rights organization in the United States, the Mattachine Society, in 1950.

In 1982, a group of German researchers and activists founded the Magnus Hirschfeld Society (Magnus-Hirschfeld-Gesellschaft e.V.) in West Berlin, in anticipation of the then-approaching 50th anniversary of the destruction of the Hirschfeld's Institute for Sexual Science; ten years later, the society established a Berlin-based center for research on the history of sexology.[8] The society's stated goals are the following:[9]

The Hirschfeld Eddy Foundation, established in Germany in 2007, is named for Hirschfeld and lesbian activist FannyAnn Eddy. 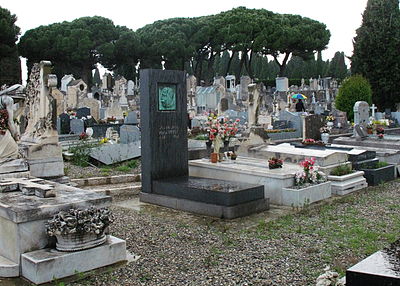 The tomb of Magnus Hirschfeld in the Caucade Cemetery in Nice, France, photographed on the rainy afternoon of May 13, 2010, the day before the 75th anniversary of Hirschfeld's death.

Hirschfeld's works are listed in the bibliography:

The following have been translated into English: