PZL (Państwowe Zakłady Lotnicze - State Aviation Works) was the main Polish aerospace manufacturer of the interwar period, based in Warsaw, functioning in 1928-1939. The abbreviation was thereafter - from late 1950s - used as an aircraft brand and as a part of names of several Polish state-owned aerospace manufacturers referring to traditions of the PZL, belonging to the Zjednoczenie Przemysłu Lotniczego i Silnikowego PZL - PZL Aircraft and Engine Industry Union. After the fall of communism in Poland in 1989, these manufacturers became separate plants, still sharing the PZL name. In the case of PZL-Mielec, the abbreviation means Państwowe Zakłady Lotnicze - State Aviation Works. 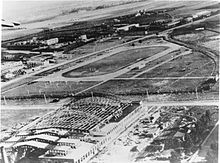 The Warsaw PZL plant in December 1939

The PZL - Państwowe Zakłady Lotnicze (State Aviation Works) was founded in Warsaw in 1928 as a state-owned company, and was based on the earlier CWL (Centralne Warsztaty Lotnicze) - Central Aviation Workshops.[1] First to be produced was a licensed version of a French fighter, the Wibault 70, but from then on the company produced exclusively its own designs. In the next decade Zygmunt Puławski designed a series of high-wing, all-metal modern fighters: PZL P.1, P.6, P.7 and P.11. The last two types were used as basic fighters in the Polish Air Force from 1933 onwards. The last variant, PZL P.24, developed after Puławski's death in an air crash, was exported to four countries. PZL also mass-produced a light bomber, PZL.23 Karaś, and a modern medium bomber, PZL.37 Łoś, as well as building small numbers of sport planes (PZL.5, PZL.19, PZL.26), and liaison aircraft (PZL Ł.2) and developing prototypes of passenger aircraft. In the late 1930s the company also developed several prototypes of more modern fighters, bombers and a passenger airliner, the PZL.44 Wicher. However, World War II prevented such planes from entering production. PZL was the largest Polish pre-war aircraft manufacturer. In 1934, the main factory in Warsaw was named PZL WP-1 (Wytwórnia Płatowców 1 - Airframe Works 1) in the Okęcie district of Warsaw. A new division PZL WP-2 was built in Mielec in 1938-1939, but production was only just starting there at the outbreak of World War II.[1] An engine factory division, PZL WS-1 in Warsaw-Okęcie (Wytwórnia Silników - Engine Works 1), produced mostly licensed versions of British Bristol engines, such as the Bristol Pegasus and the Bristol Mercury. The WS-1 factory was formerly Polskie Zakłady Skody, the Polish division of Skoda Works, and was nationalized and renamed in 1936. In 1937-1939 a new engine division, PZL WS-2, was built in Rzeszów.[1]

During World War II, the Polish aviation industry was completely destroyed. The post-war communist government of Poland wanted to break all connections with pre-war Poland[citation needed]: from the late 1940s the name PZL ceased to be used, and new aerospace factories were named WSK (Wytwórnia Sprzętu Komunikacyjnego - Communication Equipment Factory). Under the Soviet-influenced, centrally-planned economy no own designs were produced for a decade, and only in late 1950s, around the end of stalinist period (1956), did the PZL brand return to designing new aircraft. ZPLiS PZL - Zjednoczenie Przemysłu Lotniczego i Silnikowego PZL - PZL Aircraft and Engine Industry Union, which grouped all state-owned aerospace industry factories, was created but it only enjoyed some economical autonomy from 1973 onwards.[2] It consisted of 19 factories, a research institute, and the Pezetel Foreign Trade Center - CHZ Pezetel, which represented all the Polish aerospace industry abroad ("Pezetel" being the pronunciation of an abbreviation PZL in Polish).[2] Consequently, in the 1970s some WSK factories also introduced the PZL abbreviation to their names. After the fall of communism in Poland in 1989, all manufacturers became separate plants, still sharing the PZL name.

The main factory PZL WP-1 in Warsaw was destroyed during World War II, mostly during the German evacuation in 1944. In 1946, the CSS construction bureau (Centralne Studium Samolotów - Central Aircraft Studies) was set up there. As the factory was rebuilt, it was renamed in 1950 as the WSK Nr.4, and in 1956 as the WSK-Okęcie.[3] It first produced licensed versions of Soviet planes and planes developed by other Polish companies. From 1958 onwards it started to produce its own designs under the PZL brand, starting with the PZL-101 Gawron, also the PZL MD-12. The factory developed mainly light sports, trainer and utility aircraft. The best known designs are: the PZL-104 Wilga utility aircraft, which was produced in larger numbers than any other Polish designed plane; and the PZL-106 Kruk agricultural aircraft. During the 1970s the factory adopted the name WSK "PZL Warszawa-Okęcie", which after the fall of the communist system was changed in 1989 to PZL Warszawa-Okęcie. In 2001 the factory was bought by the Spanish company EADS CASA and since then has been known as EADS PZL Warszawa-Okęcie SA.

The PZL WP2 factory in Mielec became a part of Heinkel during the German occupation of Poland. After the war the factory, named first PZL No.1 works,[4] then from 1949 WSK-Mielec, and later WSK "PZL-Mielec", became the biggest post-war Polish aircraft producer.[4] It manufactured mostly licensed Soviet planes, such as the Antonov An-2 transport biplane and jet fighters such as the MiG-15 (as Lim-1 and Lim-2) and MiG-17 (as Lim-5 and Lim-6). It also produced the Polish-designed TS-8 Bies piston trainer and TS-11 Iskra jet trainer, and the PZL M-15 Belphegor the world's only jet agricultural plane. Large numbers of aircraft were exported abroad, mostly to the USSR.[4] From the 1970s onward it produced mostly its own developments of licensed civil aircraft, the best known are the M-18 Dromader agricultural plane, which was exported to numerous countries, and the PZL M-28 Skytruck/Bryza light transport plane. In 1998 the state factory WSK PZL-Mielec went bankrupt and was changed into the state-owned Polskie Zakłady Lotnicze Sp.z o.o. (Polish Aviation Works) (PZL Mielec).

On March 16, 2007, PZL Mielec was purchased by the Sikorsky Aircraft Corporation, a unit of United Technologies Corporation (UTX). It still produces M-18 and M-28 aircraft.

In 1951 a third national aerospace factory, WSK-Świdnik, was built in Świdnik,[5] and in 1957 it was renamed to WSK "PZL-Świdnik". Since 1956 it has become one of the world's major helicopter manufacturers, producing helicopters under Soviet licences, starting from the SM-1 (Mil Mi-1).[5] Świdnik was the main producer of the Mi-1 and the exclusive producer of the Mil Mi-2, which was widely-used throughout the world. Since the late 1980s, Świdnik has been producing a Polish-designed medium helicopter PZL W-3 Sokół. It also produces a light helicopter, the PZL SW-4 Puszczyk. After 1991 the state factory became a state-owned corporation (WSK "PZL-Świdnik" SA). It also produced the SZD-30 Pirat, PW-5 and PW-6 gliders and cooperates widely with other nations' manufacturers, e.g., in the manufacture of Agusta A109 fuselages.

In early 2010 the factory was acquired by AgustaWestland.

Glider manufacturer SZD (Szybowcowy Zakład Doświadczalny - Glider Experimental Works) created in Bielsko-Biała in 1948 and was renamed to PZL-Bielsko in the 1990s. The main Polish producer of gliders, its products were exported to many countries. However, for most of its history it did not carry PZL name. Currently it is named Allstar PZL Glider Sp.z o.o. (from 2002).

In 1952 the engine manufacturer WSK-Kalisz was created. It manufactured mostly Soviet-licenced engines, first piston (the Shvetsov ASh-82 and the Ivchenko AI-14) and then jet (the Klimov VK-1). It also produced Polish piston engines, such as the WN-3, and other equipment. In October 1996 it was renamed WSK "PZL-Kalisz" and became a corporation (SA).

WSK Warszawa II was created in 1952 in Warsaw as a manufacturer of aircraft parts and military equipment parts. In 1995 it was changed from a state factory to a corporation WSK "PZL Warszawa II" SA.

A list of aircraft designed or produced by PZL