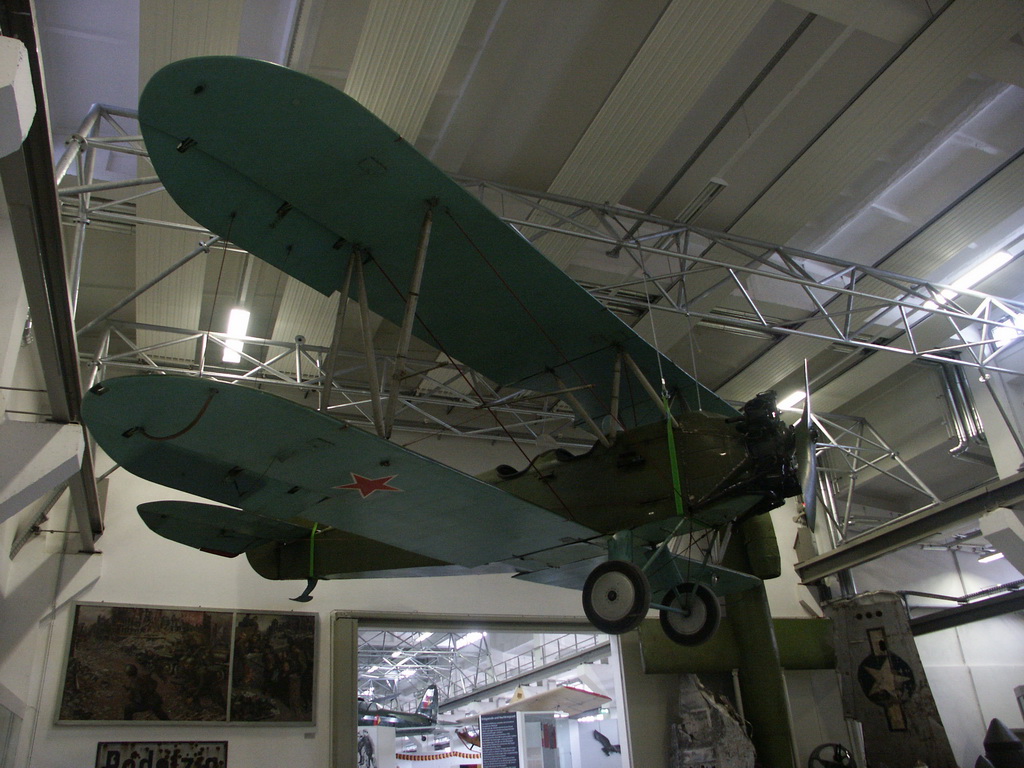 The U-2 or Po-2 served as a general-purpose Soviet , nicknamed "" ( _ru. Кукурузник, from Russian "kukuruza" (кукуруза) for ), NATO reporting name of "Mule". [ [http://en.wikipedia.org/wiki/List_of_NATO_reporting_names_for_miscellaneous_aircraft] Soviet people later used "kukuruznik" as a nickname for Soviet leader , notorious for his indiscriminating introduction of all over the , as well as for a plane with similar characteristics, the .] The reliable, uncomplicated and forgiving aircraft served as a trainer and . It is the second most produced aircraft, and the most produced biplane, in the history of aviation.

The prototype of the U-2, powered by a 99 hp (74 kW) air-cooled five cylinder radial engine, first flew on 7 January 1928. It was designed by to replace the U-1 trainer (). Its name was changed to Po-2 in 1944, after Polikarpov's death, according to the new Soviet naming system using designer's initials.

From the beginning, the U-2 became the basic Soviet civil and military trainer aircraft, mass produced in a factory "Red Flyer" near Moscow. It was also used for transport, and as a military , due to its capabilities. Also from the beginning it was produced in an agricultural aircraft variant, what earned it its nickname "Kukuruznik". Although entirely outclassed by contemporary aircraft, the "Kukuruznik" served extensively on the Eastern Front in , primarily as a liaison, and general supply aircraft. It was especially useful for supplying behind the front line. Its low cost and easy maintenance led to a production run of over 40,000. Manufacturing of the Po-2 in the USSR ceased in 1949, but until 1959 a number were assembled in Aeroflot repair workshops.

After first trials of arming the machine with bombs in 1941, from 1942 it was adapted as a light night ground attack plane. "" troops nicknamed it "Nähmaschine" (sewing machine) for its rattling sound. The material effects of these missions was mostly insignificant, but the psychological effect on German troops was much more noticeable. They typically attacked by complete surprise in the dead of night, denying German troops sleep and keeping them constantly on their guard, contributing yet further to the already exceptionally high stress of combat on the Eastern front. Their usual tactics involved flying only a few meters above the ground, rising for the final approach, cutting off the engine and making a gliding ing run, leaving the targeted troops with only the eerie whistling of the wind in the wings' bracing-wires as an indication of the impending attack. "" fighters found it extremely hard to shoot down the Kukuruznik because of three main factors: the rudimentary aircraft could take an enormous amount of damage and stay in the air, the pilots used the defensive tactic of flying at treetop level, and the of both the and the was similar to the Soviet craft's maximum cruise speed, making it difficult for the newer aircraft to keep a Po-2 in weapons range for an adequate period of time. [cite book |title=Night Witches: The Amazing Story Of Russia's Women Pilots in World War II |last=Myles |first=Bruce |year=1997 |publisher=Academy Chicago Publishers |isbn=0897332881] The U-2 was known as the plane used by the 588th Night Bomber Regiment, composed of all-women pilots and ground crew. The unit became notorious for its daring low-altitude night raids on German rear-area positions, with veteran pilots and on one occasion flying 18 such missions in a single night. The women pilots observed that the enemy suffered a further degree of demoralization simply due to their antagonists being female. As such, the pilots earned the nickname "Night Witches" (German "Nachthexen", Russian "Ночные Ведьмы"/Nočnye Ved’my). The unit earned numerous citations and dozens of medals; most surviving pilots had flown nearly 1000 combat missions at the end of the war and had taken part in the .

n forces used the Po-2 in a similar role in the . A significant number of Po-2s were fielded by the , inflicting serious damage during night raids on Allied bases. [Dorr 2003, p.50] UN forces named the Po-2's nighttime appearance "Bedcheck Charlie" and had great difficulty in shooting it down &mdash; even though s had as standard equipment in the 1950s, the wood-and-fabric-construction of the Po-2 gave only a minimal radar echo, making it hard for an opposing fighter pilot to acquire his target.

* U-2: Basic model, built in large numbers as a two-seat primary trainer. It was also built in many different versions, both as civil and military aircraft. The U-2 variants also included a light transport, utility, reconnaissance and training aircraft. Power plant was the M-11 radial piston engine of 100 hp (75 kW). Later models were also equipped with uprated M-11 engines of 150 hp (110 kW). Some aircraft were fitted with a rear closed cabin, other were fitted with sledges or floats.
* U-2A: Two-seat agricultural crop dusting aircraft, powered by a 115-hp (86-kW) M-11K radial piston engine. Later redesignated Po-2A after 1944.
* U-2AO: Two-seat agricultural aircraft.
* U-2AP: , with a rear cab replaced with a container for 200-250 kg of chemicals. 1235 were built in 1930-1940.
* U-2G: This experimental aircraft had all the controls linked to the control column. One aircraft only.
* U-2KL: Two aircraft fitted with a bulged canopy over the rear cabin.
* U-2LSh: Two-seat ground-attack, close-support aircraft . The aircraft were armed with one 7.7-mm (0.303-inch) ShKAS machine-gun in the rear cockpit. It could also carry up to 264-lb (120-kg) of bombs and four RS-82 rockets. Also known as the U-2VOM-1.
* U-2LPL: Experimental prone-pilot research aircraft.
* U-2M: This floatplane version was fitted with a large central float and two small stabilishing floats. Not built in large numbers. Also known as the MU-2.
* U-2P: version, built only in limited numbers, in several variants with different designations.
* U-2S: version, built from 1934. It could take a physician and an injured on a on a rear fuselage, under a cover. Variant U-2S-1 from 1939 had a raised fuselage top upon the stretcher. From 1941 there were also used two containers for stretechers, that could be fitted over lower wings or two containers for two seating injured each, fitted under lower wings.
* U-2SS: Air ambulance aircraft.
* U-2ShS: Staff liaison version, built from 1943. It had a wider fuselage and a closed 4-place rear cab.
* U-2SP: Civil transport version, could carry two passengers in open individual cabs, built from 1933. Other roles included aerial survey, and aerial photography. 861 were buiilt between 1934 and 1939.
* U-2SPL: This limousune version was fitted with rear cabin for two passengers.
* U-2UT: Two-seat training aircraft, powered by a 115-hp (86-kW) M-11D radial piston engine. Built in limited numbers.
* U-2LNB: Soviet Air Force night attack version, built from 1942. Armed with one 7.62 mm (0.303-inch) , plus up to 250 kg of bombs under the wings for land support. Earlier aircraft were converted to improvised bombers from 1941.
* 'U-2VS : Two-seat training and utility aircraft. Later redesignated Po-2VS after 1944.
* U-2NAK: Two-seat night artillery observation, reconnaissance aircraft. Built from 1943.
* U-3: Improved flying training model, fitted a 200-hp (149-kW) M-48 engine.
* U-4: Cleaned-up version with slimmer fuselage. Not built in large numbers.
*-(Total U-2 manufacture: 33,000)
*Po-2: Basic post-war trainer variant.
*Po-2A: Post-war agricultural variant.
*Po-2GN: "Voice from the sky" propaganda aircraft, fitted with a loud speaker.
*Po-2L : Limousone version with an enclosed passenger cabin.
*Po-2P : Post-war flotplane version. Built in small numbers.
*Po-2S: Post-war air ambulance variant, with a closed rear cab.
*Po-2S-1: Post-war ambulance version, similar to the pre-war U-2S.
*Po-2S-2: Post-war ambulance version, powered by a M-11D radial piston engine.
*Po-2S-3: Post-war ambulance version, which had two underwing containers, each one was designed to transport one stretcher patient. Also known as the Po-2SKF.
*Po-2ShS: Staff communications aircraft, fitted with an enclosed cabin for the pilot and two or three passengers.
*Po-2SP: Post-war aerial photography, geographic survey aircraft.
*RV-23: This floatplane version of the U-2 was built in 1937. It was used in a number of seaplane altitude record attempts. The RV-23 was powered by a 710-hp (529-kW) R-1820-F3 Cyclone radial piston engine.
* CSS-13: Polish licence version, built in Poland in WSK-Okęcie and WSK-Mielec after World War II (about 500 built in 1948-1956).
* CSS S-13: Polish ambulance version with a closed rear cab and cockpit and Townend ring (53 built in WSK-Okęcie in 1954-1955, 38 converted to S-13).
* E-23: Research version, built in the Soviet Union in 1934, for research into inverted flight.

The Po-2 is featured, as the U-2, in the alternate history series , as one of the few examples of human machinery that has managed to evade destruction from a technologically superior invading alien force. Because of the Po-2's wooden construction, low altitude, and slow speed, the aliens have an extremely hard time detecting it or shooting it down.