Asia Pacific Breweries (SGX: A46) is an Asian brewery company founded as Malayan Breweries Limited (MBL) in 1931, in a joint venture between Heineken International and Fraser and Neave, and given its present name in 1990. It currently controls 30 breweries in 12 countries in the Asia Pacific region, selling over 120 brands of beer and beer variants. Heineken is the largest shareholder with a 42.5% stake. The company is listed on the Singapore Exchange. 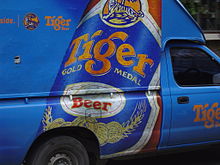 Launched in 1932, Tiger Beer became Singapore's first locally brewed beer.[1] It is a 5% abv bottled pale lager. As APB's exclusive flagship brand, it is available in more than 60 countries worldwide including the USA, Canada, Australia, New Zealand and various countries in the Middle East, Europe and Latin America.

The “It's Time for a Tiger” slogan for Tiger Beer has run for decades since its inception in the 1930s.

The writer Anthony Burgess named his first novel Time for a Tiger (the first part of the Malayan trilogy The Long Day Wanes) after the advertising slogan.[citation needed] The beer was popular in the Malaya of the 1950s, where Burgess was working.

Burgess reveals in his autobiography that, when his Time for a Tiger was published, he asked the manufacturer, then Fraser and Neave, for a complimentary clock with the Tiger beer slogan. The brewery declined to offer this or any other free gift to him. But fourteen years later, when Burgess was more famous, it relented. In 1970, the company offered Burgess a privilege of which he could consume any of their beers free of charge while in Singapore. However, in his own words Burgess wrote in response: “But it was too late, I had become wholly a gin man.”

The beer can was also seen being poured in the 2002 movie The Transporter with Jason Statham. Crates of Tiger Beer appeared in the 2008 film Tropic Thunder. Also, in the 2001 Hong Kong action thriller The Accidental Spy it's the preferred beer of Buck Yuen (played by Jackie Chan) who orders it by name in a bar and, also has an empty bottle of Tiger Beer by his bed clearly displayed in the foreground of the next scene as he wakes up from a dream.