Heineken
This article is about the beer. For the company, see Heineken International. For other uses, see Heineken (disambiguation).

Heineken is a Dutch beer (5% abv pale lager) which has been brewed by Heineken International since 1873. It is available in a 4.6% alcohol variety in countries such as Ireland. It is the flagship product of the Heineken company and is made of purified water, malted barley, hops, and yeast. In 1886 H. Elion finished the development of the Heineken A-yeast, which is still used in the brewing process today.[1] The beer is force carbonated.[citation needed] It is popular in the United States, Australia, Hong Kong, New Zealand, Vietnam, Europe, Singapore and Middle Eastern countries. 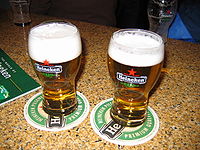 Four awards won in the early history of Heineken are mentioned on the label of the Heineken beer bottle: