Heineken International is a Dutch brewing company, founded in 1864 by Gerard Adriaan Heineken in Amsterdam. As of 2007, Heineken owns over 125 breweries in more than 70 countries[2] and employs approximately 54,000[2] people. It brews and sells more than 170 international premium, regional, local and specialty beers, including Cruzcampo, Tiger Beer, Żywiec, Starobrno, Zagorka, Birra Moretti, Ochota, Murphy’s, Star and of course Heineken Pilsener. Heineken claims that the original Heineken recipe has not changed since the beer was first produced nearly 150 years ago.[citation needed]

With an annual beer production of 139.2 million hectoliters,[2] Heineken ranks as the third largest brewer in the world after Anheuser-Busch InBev and SABMiller, based on revenue. Heineken's Dutch breweries are located in Zoeterwoude, 's-Hertogenbosch and Wijlre. The original brewery in Amsterdam, closed in 1988, is preserved as a museum called Heineken Experience.

The Heineken company was founded in 1864 when the 22-year-old Gerard Adriaan Heineken bought a brewery known as De Hooiberg (the haystack) in Amsterdam. In 1869 Heineken switched to the use of bottom-fermenting yeast. In 1873 the brewery's name changed to Heineken's Bierbrouwerij Maatschappij (HBM), and opened a second brewery in Rotterdam in 1874. In 1886 Dr. H. Elion, a pupil of the French chemist Louis Pasteur, developed the "Heineken A-yeast" in the Heineken laboratory. This yeast is still the key ingredient of Heineken beer.

The founder's son, Henry Pierre Heineken, managed the company from 1917 to 1940, and continued involvement with the company until 1951. During his tenure, Heineken developed techniques to maintain consistent beer quality during large-scale production. Henry Pierre's son, Alfred Henry "Freddy" Heineken, started working at the company in 1940, and 1971 was appointed Chairman of the Executive Board. He was a powerful force behind Heineken's continued global expansion, and while he retired from the Executive Board in 1989, he maintained involvement with the company until his death in 2002.

During this period, Heineken tried to increase its stock price by purchasing competing breweries and closing them down. After World War II, many small breweries were bought or closed. In 1968 Heineken merged with its biggest competitor, Amstel, and in 1975 opened a new brewery in Zoeterwoude. The Amstel brewery was closed in 1980, and its production moved to Zoeterwoude and Den Bosch. With the part acquisition of Scottish and Newcastle in 2007/2008 Heineken is now the second largest brewer based on revenues followed by SABMiller.

On January 12, 2010, Heineken International successfully bought the brewery division of Mexican giant FEMSA, and also merged with the company, expanding its reach throughout Latin America. The company will sell its products there through FEMSA, which is the largest bottler and brewery in all of Latin America, and maker of such brands as Dos Equis XX, Bohemia and Sol. FEMSA now owns 20% of Heineken N.V. after the early 2010 all stock deal, becoming its largest shareholder after the Dutch family who owns 50.005%.[3]

The FEMSA acquisition is expected to firmly keep Heineken in its strong position by growing its market share in the Latin American markets. FEMSA has a massive distribution network and owns Mexico's largest convenience store chain OXXO, which has thousands of locations throughout the country.

Heineken organises the company into five territories which are then divided into regional operations.[4] The regions are: Western Europe, Central and Eastern Europe, The Americas, Africa and the Middle East, and Asia Pacific. These territories contain 115 brewing plants in more than 65 countries,[5] brewing local brands in addition to the Heineken brand.

Heineken's brewing plants have been designed and engineered in several parts of the world.[6] 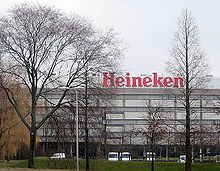 Heineken has 16 breweries in Africa and the Middle East.[7] These include:

Breweries in the Americas:[11]

Heineken International owns a worldwide portfolio of over 170 beer brands, mainly pale lager, though some other beer styles are produced. The two largest brands are Heineken and Amstel; though the portfolio includes Cruzcampo, Affligem, Żywiec, Starobrno, Zagorka, and Birra Moretti. Recently Heineken added a cider blend named Jillz to their list of brands. Since mid 2007, Heineken has also taken ownership of former S&N International brands such as Strongbow and Bulmers Ciders and John Smith's and Newcastle Brown Ale.[12]

Heineken's main advertising slogan in the UK was "Refreshes the parts other beers cannot reach",[13] some of which featured voice-over narration by Danish comedian/pianist Victor Borge. The British TV campaign ran for over 30 years - stopping in 2005.[14][15] From March 2011 they have been advertising using the song 'The Golden Age' by The Asteroids Galaxy Tour. After the success of The Entrance, a web advert (4M views in YouTube), Heineken launched The Date in May 2011.[16] This spot is a try to create a new online buzz.

Heineken sponsors a number of sporting events. The Heineken Cup is an annual rugby union knock-out competition involving leading club, regional and provincial teams from the Six Nations: England, France, Scotland, Wales, Ireland, and Italy. Heineken has been the sponsor since the cups' inaugural tournament in 1996.

The Heineken Open (tennis) is a tennis tournament on the ATP International Series played in Auckland, New Zealand.

In March 2007 Heineken announced a new advertising campaign for the Heineken brand in partnership with the UEFA Champions League, with a theme of "Enjoyed together around the world."[17]

Heineken also sponsors the music events: the Heineken Open'er Festival, a contemporary music festival held in Poland; and, since 2004, the Oxegen music festival in Ireland.

The Heineken Experience is a museum about Heineken Pilsener and the Heineken brewery, based in the original brewery in Amsterdam. The building was built in 1867, and was in use as a brewery until 1988.[18] In 1991, when part of the establishment was torn down, the Heineken Treat and Information Centre (Dutch: Heineken ontvangst- en informatiecentrum) was opened in the remaining building. In 2001 the name was changed to Heineken Experience.[19]

The museum features "rides", interactive exhibits, and two bars. It also gives an insight into the company's history and brewing processes through the years. Visitors receive one small tasting glass and two full-sized glasses of Heineken beer to drink at the end of the tour, both paid for by the 16 euro entry fee.

The Experience closed for refurbishment in October 2007 and reopened December 2008.[20]

In the mid-1990s, Heineken sponsored a late-night youth culture and music show, Hotel Babylon. The company had planned a precise marketing strategy, and falsely believed that the show's audience would match their target group in its income distribution and degree of ethnic diversity.

A fax sent on December 20, 1995 from the company's sponsorship department in Amsterdam to the show's producers, Planet 24, explained that the demographics of the audience was not in line with the company's marketing strategy, that there was "too high [a] proportion of negroes."[21] Bob Geldof, a founder and major shareholder in Planet 24, said Heineken could "go fuck themselves" as far as he was concerned. "I heard about the infamous fax and I hooted with derision. It is our programme, not Heineken's," he stated.

On January 4, 1996, Karel Vuursteen, then chief executive of Heineken worldwide reacted to the fax: "Having read the original, only one thing can be said about it: it should never have been written. ... it is totally against everything Heineken stands for. Heineken denounces all discrimination and will live up to that. I hope you can accept my sincere apology and I can assure you that proper steps will be taken to prevent recurrence."[21]

On April 18, 2007 the European commission fined Heineken €219.3m , Grolsch €31.65m and Bavaria €22.85m for operating a price fixing cartel in the Netherlands, totalling €273.7m. InBev, (formerly Interbrew), escaped without a penalty because it provided "decisive information" about the cartel which operated between 1996 and 1999 and others in the EU market. The brewers controlled 95% of the Dutch market, with Heineken claiming a half and the three others 15% each.[22]

Neelie Kroes said she was "very disappointed" that the collusion took place at the very highest (boardroom) level. She added, Heineken, Grolsch, Bavaria and InBev tried to cover their tracks by using code names and abbreviations for secret meetings to carve up the market for beer sold to supermarkets, hotels, restaurants and cafes. The price fixing extended to cheaper own-brand labels and rebates for bars.[22]

In 2004 Heineken and Kronenbourg, the two dominant brewers in France, were fined €2.5m - with the penalty reduced for co-operating.[22]