The indigenous population of Papua New Guinea is one of the most heterogeneous in the world. Papua New Guinea has several thousand separate communities, most with only a few hundred people. Divided by language, customs, and tradition, some of these communities have engaged in endemic warfare with their neighbors for centuries. 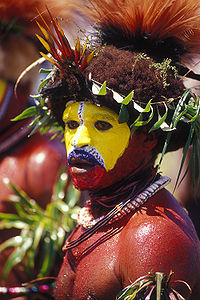 The isolation created by the mountainous terrain is so great that some groups, until recently, were unaware of the existence of neighboring groups only a few kilometers away. The diversity, reflected in a folk saying, "For each village, a different culture", is perhaps best shown in the local languages. Spoken mainly on the island of New Guinea, about 650 of these Papuan languages have been identified; of these, only 350-450 are related. The remainder of the Papuan languages seem to be totally unrelated either to each other or to the other major groupings. In addition, many languages belonging to Austronesian language group are used in Papua New Guinea, and in total, more than 800 languages are spoken in Papua New Guinea.[1] Native languages are spoken by a few hundred to a few thousand, although Enga language, used in Enga Province, is spoken by some 130,000 people.

Tok Pisin serves as the lingua franca. English is the language of business and government, and all schooling from Grade 2 Primary is in English.

A considerable urban drift towards Port Moresby and other major centers has occurred in recent years. Between 1978 and 1988, Port Moresby grew nearly 8% per year, Lae 6%, Mount Hagen 6.5%, Goroka 4%, and Madang 3%. The trend toward urbanization accelerated in the 1990s, bringing in its wake squatter settlements, unemployment, and attendant social problems. Almost two-thirds of the population is Christian. Of these, more than 700,000 are Roman Catholic, more than 500,000 Lutheran, and the balance are members of other Protestant denominations. Although the major churches are under indigenous leadership, a large number of missionaries remain in the country. The non-Christian portion of the indigenous population practices a wide variety of religions that are an integral part of traditional culture, mainly animism (spirit worship) and ancestor cults.

Foreign residents are just over 1% of the population. More than half are Australian; others are from the United Kingdom, New Zealand, the Philippines, and the United States. Since independence, about 900 foreigners have become naturalized citizens.

Most Papua New Guineans still adhere strongly to this traditional social structure, which has its roots in village life. 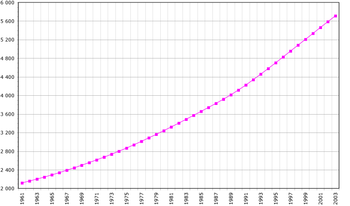 The following demographic statistics are from the CIA World Factbook 2011, unless otherwise indicated.[2]

Of the three official languages, English spoken by 1%-2% of the population, Tok Pisin is widespread, and Hiri Motu is spoken in the Papua region, the main region in which Tok Pisin is not prevalent. There are 820-830 indigenous languages.[1] The language with the largest single number of speakers is Enga (180,000).

definition: age 15 and over can read and write